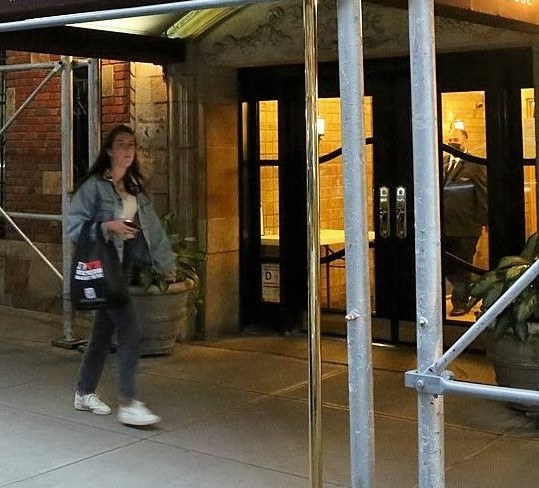 A woman walked past Alec Baldwin's building in Greenwich Village on Fri., Oct. 22, a day after the actor accidentally fatally shot the cinematographer and injured the director on a movie set. (Photo by © Jefferson Siegel)

BY THE VILLAGE SUN | Tragedy struck Thursday when actor Alec Baldwin accidentally fatally shot the director of photography for a movie he is acting in, while filming in Santa Fe, New Mexico.

Baldwin, 63, who lives with his family in Greenwich Village not far from Union Square, was acting in a scene for “Rust,” an 1880s period Western film. He fired a prop gun on set, killing Halyna Hutchins, 42, and wounding Joel Souva, 48, the film’s director, in the shoulder.

An investigation is underway to determine what happened with the allegedly “cold gun” — whether a blank, live bullet or bullet fragment was fired.

No charges have been filed.

There had reportedly been turmoil during the filming, with a half dozen camera-crew members walking off the set hours before the fatal accident to protest working conditions.

The Los Angeles Times reported, “The camera operators and their assistants were frustrated by the conditions surrounding the low-budget film, including complaints about long hours, long commutes and collecting their paychecks, according to three people familiar with the matter who were not authorized to comment.”

On Friday, Baldwin tweeted, “There are no words to convey my shock and sandness regarding the tragic accident that took the life of Halyna Hutchins, a wife, mother and deeply admired colleague of ours. I’m fully cooperating with the police investigation to address how this tragedy occurred and I am in touch with her husband, offering my support to him and his family. My heart is broken for her husband, their son, and all who knew and loved Halyna.”

The New York Post reported that Baldwin’s wife, Hilaria, 37, was seen leaving their Village home Friday. The tabloid said that, later that day, the couple’s six children, ranging from age 8 to less than 1, and cat were also spotted exiting the building and getting into a black Cadillac SUV, accompanied by a dark-haired woman.