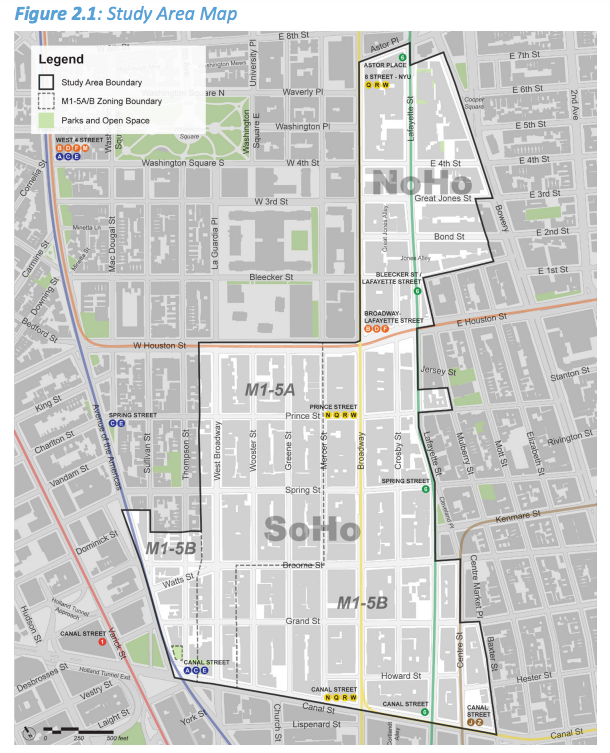 A map showing the study area of the Soho/Noho rezoning proposal.

Affordable housing as Trojan horse in Soho and Noho

BY ANDREW BERMAN | The future of New York City seems more uncertain now than perhaps any time since the fiscal crisis of the 1970s. There’s massive unemployment, rampant homelessness, small business closures and a mass transit disaster looming. Amidst all of this, the unaffordability of too much housing for too many New Yorkers remains a vast, unresolved problem.

But a push by aligned real estate interests in favor of a large-scale upzoning of Soho and Noho takes a Trump-like approach to this challenge, while hiding the vested interests of those behind the push. Dishonestly, they gloss over neighbors’ true objections to the plan’s overscaled towers of largely luxury housing, claiming opponents are resisting affordable housing rather than new construction of a neighborhood-shattering scale.

Just before COVID hit, the city concluded a year-long process looking at a vast array of regulations governing these neighborhoods, to consider potential changes. Zoning and other rules for Soho and Noho are renowned for their complexity and, in many cases, date back decades to when these were very different places.

Those regulations were also notoriously unevenly enforced by the city, allowing those with means to sidestep the rules in various ways. No one — from longtime artist residents who built the neighborhood to newer wealthier largely non-artist residents, or from small store and property owners to the big-box chains and moneyed developers increasingly eying the neighborhood — was satisfied with the status quo.

But when business groups engineered the recent Soho/Noho “re-envisioning” process, many neighbors, including Village Preservation, pushed back, aware of this administration’s miserable track record on developer-driven, community-unfriendly rezonings. This latest campaign to use this process as a vehicle for a large-scale upzoning in the neighborhood — which the city claimed was never its intention — confirms the worst fears about the motivations behind the process.

Groups like CHPC (Citizens Housing Planning Council) — whose board consists of developers such as Edison Properties, which owns two of the largest development sites in Soho and Noho — claim both their upzoning push, and the opposition to it, are about affordable housing. Nothing could be further from the truth. (Read the recent report by CHPC here, which makes no mention of the vested interests and potential profits that would flow to members of their board if their recommendations were carried out).

I can only speak for the group I lead. We have consistently made clear that new affordable housing is welcome in our neighborhoods, including in Soho and Noho, even waging a letter writing campaign to city officials indicating so. And in dozens of meetings, I have never heard a single person object to increasing affordable housing in the neighborhood; if they have, they would certainly not get support for that cause from my organization.

What I have heard, however, and what we have amplified, is objections to increasing the size of allowable new development in the neighborhood by 250 percent, as is being proposed, to allow huge towers of 70 to 75 percent luxury housing and 25 to 30 percent affordable housing. For example, current zoning rules would allow a 100,000-square-foot building on CHPC board member Edison Properties’ parking lot in Noho. No new residential development is allowed “as of right” in either Soho or Noho, but can be granted through a variety of mechanisms. So, assuming an allowance for residential use were granted here within the size constraints currently in place for development in the area, 100,000 square feet of affordable housing could be produced — a dramatic infusion for this pricey neighborhood. Yet, Edison has expressed no interest in building affordable housing at this spot.

What CHPC’s plan would do instead is upzone the site to allow it to construct a quarter-million-square-foot development there — vastly larger than what’s currently allowed, and was allowed when Edison bought and paid for the property. Under its plan, utilizing the city’s Mandatory Inclusionary Housing provisions, such a development would include 175,000 to 187,500 square feet of super-luxury housing, and just 62,500 to 75,000 square feet of affordable housing — or significantly less than a purely affordable development built within the existing zoning limits for size of a new development here.

And if you think these current limits don’t allow sufficiently large new buildings in Soho and Noho, look at recent developments built under those limits at 210 Sullivan St., 27 Grand St. and 9 Crosby St. They are 210, 258 and 311 feet tall, respectively; upzoning advocates want new development two and half times that size.

Soho and Noho residents — especially longtime ones who helped build these neighborhoods from semi-abandoned and sometimes dangerous wastelands — care deeply about the character of their neighborhoods, and want new development to match rather than overwhelm it. I would posit that a well-designed affordable housing development that fits the existing size limits for new development in our neighborhoods would be welcome at that parking lot at Lafayette and Great Jones Sts. in Noho.

But whether it’s there, or Edison’s other lot at Centre and Hester Sts., or many other underbuilt, potential development sites in the neighborhood, residents would and do object to massive, out-of-scale and out-of-character new towers. And this is especially so when such projects’ biggest consequence would simply be adding massive amounts of previously restricted super-luxury housing to the neighborhood, and granting a dramatic windfall to developers who are, in many cases, behind the rezoning push.

CHPC and some advocates have bought into the false dichotomy promulgated by real estate interests and the de Blasio administration that the only way to get new affordable housing in New York City is to grant massive bonuses to luxury and market-rate housing developers. These bonuses vastly increase the developers’ profits and the size of their new buildings, but require only a small payback of affordable housing in return.

This is not unlike the Trump 2017 tax cut, where the price for a small amount of relief for middle- and lower-class Americans was massive tax cuts for the richest Americans and big corporations, who reaped by far the majority of those benefits. The New York Post editorial board recently called upon Mayor de Blasio to move ahead with this kind of upzoning in Soho and Noho, telling you everything you need to know about the true thinking and interests behind such an approach.

We can and should do better. As we have already pointed out, existing mechanisms would allow the city to mandate the inclusion of affordable housing when manufacturing or commercial buildings in Soho and Noho are converted to residential use, which is the largest source of new housing in those neighborhoods. Like our rezoning plans for other parts of our neighborhood that would introduce or encourage affordable housing, this approach has been roundly ignored and rejected by the administration, and by groups like CHPC. Why? Seemingly because it doesn’t rely upon the massive windfall for the big real estate interests who are Mayor de Blasio’s biggest campaign donors, and among the members of CHPC’s board.

This piece was first published in citylimits.org.