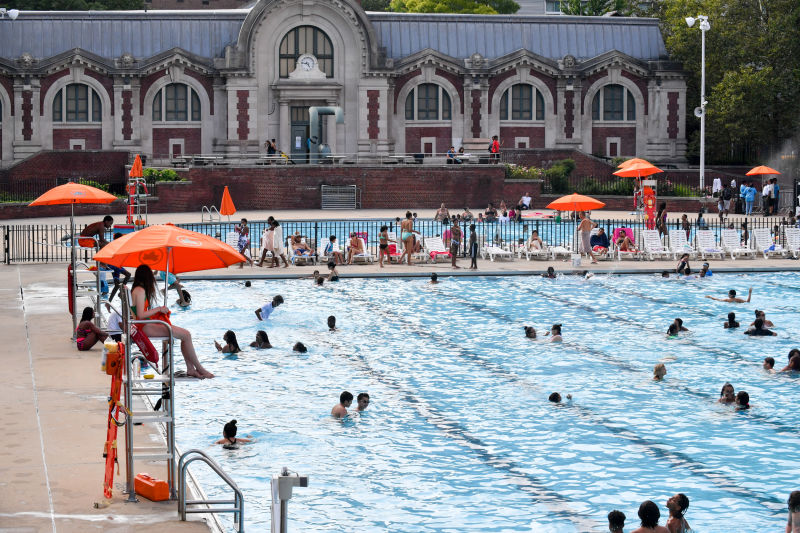 Only one-third of the Olympic-size Hamilton Fish Pool has been open due to the lifeguard shortage.

BY THE VILLAGE SUN | Mayor Eric Adams on Wednesday announced that the city has reached a deal with the lifeguard union, represented by District Council 37, to raise starting wages for city lifeguards to $19.46 per hour this summer, plus develop a training program to fully staff the city’s 17 mini pools a.k.a. kiddie pools.

When the city’s outdoor pools opened on June 28 for the summer, it was revealed that, due to a lifeguard shortage, adult lap swims had been cut, along with kids’ swim lessons.

The lack of lifeguards has, for example, meant that only one-third of the Olympic-size Hamilton Fish Pool, on the Lower East Side, is currently open to swimmers, while its kiddie pool has been completely closed.

As Georgette Fleischer, president of Friends of Petrosino Square, recently wrote in a reader comment to The Village Sun, when she showed up with her 4-year-old daughter at Hamilton Fish, she was informed that the wait to get in the water was one and a half hours — then when she tried to swim it was nearly impossible due to all the young swimmers “horsing around.”

Councilmember Julie Menin, representing the Upper East Side, which boasts the popular John Jay Pool, wrote to Adams the day after the splash centers opened, urging him to take “swift action” to raise new city lifeguards’ pay from $16 to $20 an hour — as the state has done for lifeguards at state beaches.

“Every New Yorker deserves to safely enjoy our city’s public pools and beaches this summer and my team has taken extraordinary measures to make that happen,” Adams said. “Today we reached a deal with the lifeguard union to address the immediate needs of our pools.

“We negotiated for creation of a class of lifeguards who are restricted to mini pools and with this influx of mini pool guards we will be able to very quickly open all of our mini pools, an essential cooling center for young New Yorkers.

“We are also elevating, for this summer alone, lifeguard pay to $19.46 per hour, and to ensure our beaches and pools are guarded all summer long, we will pay a retention bonus in September to guards who work every week through the end of the summer season.

“Finally, we are collaborating across city agencies on a public safety presence to keep swimmers off closed sections of beach, and working with Office of Emergency Management, the Fire Department and the Police Department to deploy complementary measures to keep New Yorkers safe.

“While these changes are a step in the right direction, our ability to safely open beaches and pools has been impacted by a national lifeguard shortage, and has also been held back by inefficient practices that are in dire need of further reform,” Adams noted. “We will continue to work closely to correct course on policies that don’t serve New Yorkers and pool resources from all agencies to ensure a fun and safe summer.”