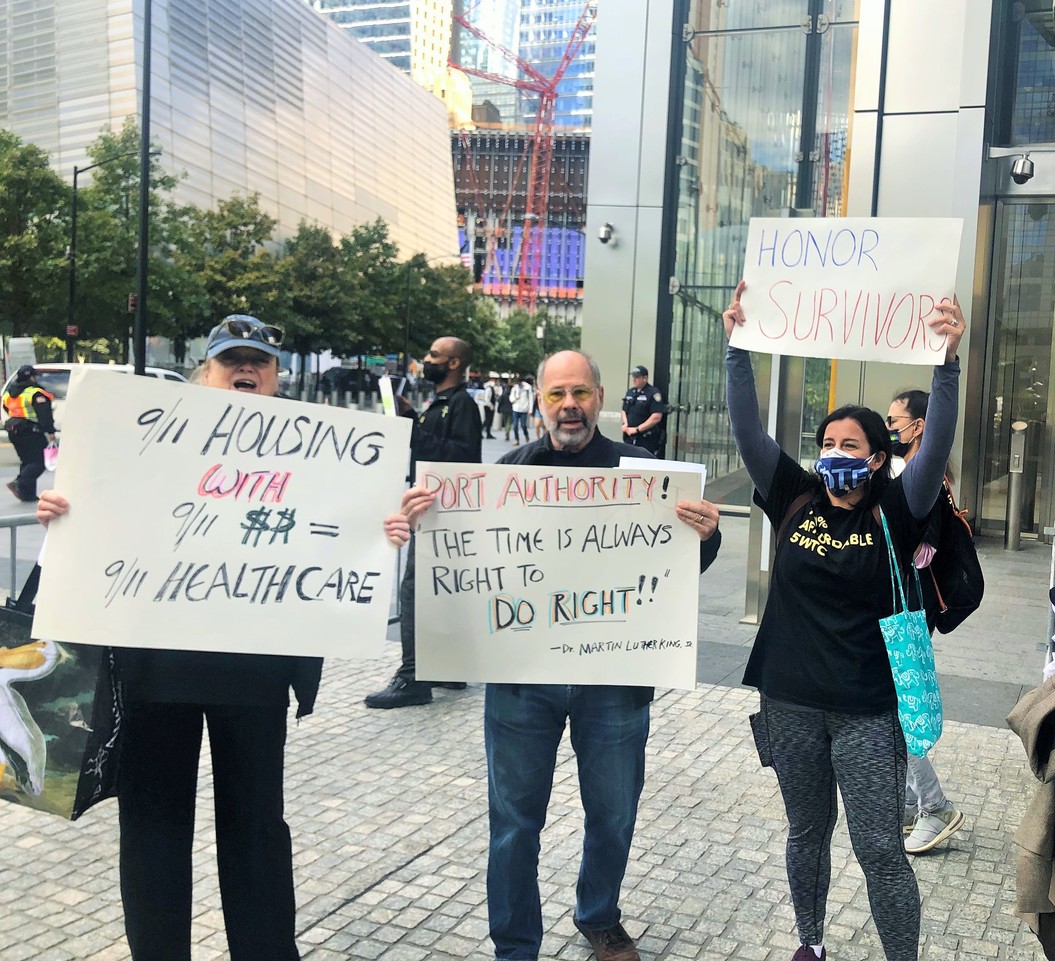 BY DASHIELL ALLEN | Members of the Coalition For An Affordable Tower Five rallied outside Four World Trade Center last Thursday before the Port Authority’s monthly executive board meeting, demanding greater transparency and 100 percent affordability at a proposed mixed-use residential development at the World Trade Center.

Back during a May 2021 community board meeting, representatives from the Lower Manhattan Development Corporation, Empire State Development and the Port Authority presented plans for what they described as a 25 percent affordable tower at World Trade Center Site Five. And many key questions remain unanswered.

“We shouldn’t be talking about affordability, because some people think [25 percent is] a great number,” said Tammy Meltzer, chairperson of Community Board 1. “When you look at it and say, it’s 75 percent market rate, that’s actually the reality.”

“It would be an asset actually. I look at it as an ideal opportunity to add back what is sorely missing,” she said, referring to the thousands of affordable rent-regulated units Lower Manhattan has lost to deregulation over the past 20 years.

Rick Cotton, the Port Authority’s executive director, told The Village Sun at last Thursday’s press conference that the three agencies are “cooperatively” running a procurement process to develop the site of the former Deutsche Bank building, which they acquired with federal Housing and Urban Development funds more than 10 years ago.

Cotton said that the current plan for 25 percent affordability, or roughly 300 units, “would be the largest single commitment of affordable units that Lower Manhattan has seen.”

But rather than accept the closed-door negotiations and what it calls a relatively slim percentage of affordability, the coalition and local politicians would simply like to get a clearer picture of what is going on. Namely, is this truly the maximum amount of affordable units that federal, state and city funds can buy? And why hasn’t the development process been more transparent?

“I’m confused as to why everyone is saying it has to be all one or the other” funding source, Meltzer said. “I’m uncertain as to why we can’t look at it and pull together a coalition of funding opportunities to create the most diverse housing that there is for the widest swath of people.”

Back in May, local activist Todd Fine submitted a list of questions to the agencies and developers. He wanted to know, among other things, the project’s timeline — what needed to happen for it to break ground — how many bids for a residential development were received, and how much the tower would cost to develop.

Those are the same questions that politicians brought to the agency’s attention when they met in September. As of late, though, none of them have been answered.

“We said that it’s important that there be transparency around the numbers for this building because how can we assess their current affordability proposal?” state Senator Brian Kavanagh told The Village Sun, referring to his meeting with agency officials.

“They said that those numbers are still confidential because they’re in an ongoing negotiation,” he said. “And I said, ‘On what basis are you prohibited from providing that?’ Absent some statute that they’d be violating by that transparency, I think they should be transparent.”

Kavanagh said he doesn’t have a sense of the project’s time frame, either, or when it could potentially break ground. He suggested that the three agencies hold a joint open community forum — preferably in person — to allow for greater community input.

Further muddying the waters, the L.M.D.C. issued a “Notice For Early Public Review” for the Tower Five project last Friday, requesting the public submit comments by Oct. 18. It is unclear exactly where this review falls in the entire project’s timeline.

Meltzer said the community board was not given a heads-up about the two-week comment period.

“It’s not as if they didn’t know it was coming on Wednesday when they talked to us,” Meltzer added. “When you work in a partnership, communication and transparency are the keys to success.”

At a community board meeting last Wednesday, Tobi Jaiyesimi, a senior director at E.S.D., acknowledged meeting with the local politicians.

“They’ve given us some homework and tasks, in which we have to go back and look at what the public subsidy and additional funds [are] that would be required to increase the affordability rate at the project,” she said.

As to the proposal for a forum, Jaiyesimi said, “We’ll be sure to follow up with the senator’s office to discuss that and see what opportunities would be available to have such public engagement.

“I can offer you fluff but I won’t do that,” she added. “In all sincerity, as best we can, we’ll provide updates.”

“We had a meeting five months ago,” Fine said. “We were asked to submit written questions. They weren’t answered. That’s a total disrespect to this community board, it should not be allowed. They have written questions, they receive written responses.”

No date was provided as to when the questions would be answered.

Another outstanding question has to do with the Port Authority’s role in the Five W.T.C. site’s development. As a transportation agency, the Port isn’t typically involved with residential development. Yet, as the owner of the land where the Site Five tower would be built — land that it is leasing to the L.M.D.C. — the Port expects to be compensated by the building’s revenue.

Justin Bernbach, the Port Authority’s director of government and community relations, said at the same C.B. 1 meeting that his agency had “forgone a large amount of office space that had been in the original plan for us to develop, and that was in turn meant to replace what was lost in the Twin Towers.” That includes the land on which the 9/11 memorial sits, as well as the site of a future performing arts center.

“What we got in return for giving up that land was the right to develop office space that would make us whole, by replacing the forgone office space from 9/11,” Bernbach said, referring to Site Five. However, now that the site will be built for primarily residential use, Bernbach said his agency still needs compensation equal to that of an office or commercial tower.

“The next question would naturally be, ‘O.K., well what are you earning?'” he added, “and I’ll not answer that question.

“We’re going to get back to the electeds, sit down and have a thorough conversation about all the opportunities in terms of affordable housing,” he assured the virtual crowd. “This money that we do earn is required for us, it’s needed for our capital plan.”

Vittoria Fariello, a member of the Coalition for an Affordable Tower Five and a Democratic district leader, responded: “We have lost thousands of units of affordable housing in Lower Manhattan, and this is truly the opportunity to help make us whole.”

“We have a rich and beautiful history in Lower Manhattan that is being gentrified out,” added C.B. 1 Chairperson Meltzer.  “And while some people will tell you that that is just the way of the city, the city and the state have an opportunity to truly make sure that there’s affordable housing from the tip of the island to the top of the island.”

Meltzer has lived in Lower Manhattan for more than 25 years. During that time she’s seen a radical shift in its demographics. She used to work at the renowned Windows on the World restaurant in the World Trade Center.

“There are people who worked at Windows on the World, who could afford to live in Lower Manhattan,” she recalled. “Seamstress, banquet waiters, restaurant workers, a robust, diverse group of people. They can no longer afford to live down here, which then adds to everything else that comes with the problems in New York City.”

To her, developing Five World Trade Center the right way would be the first step in restoring the area’s past cultural and socioeconomic diversity.

Ronald Shiffman, a professor at Pratt Institute who served on the City Planning Commission in the 1990s, helped form the Civic Alliance to Rebuild Manhattan. The alliance brought together more than 5,000 individuals and organizations for public listening sessions in the year after the terrorist attacks.

Shiffman explained that their goal was to “rebuild the area as a symbol to the world of an inclusionary democracy, where people are included, where all economic groups, all racial groups and everyone throughout the city should be engaged.”

“One of the things that we came around to is that there should be affordable housing here,” he said, “and I came before all of the boards demanding that there be affordability.”

But the Civic Alliance was “not taken seriously by two major actors, the Port Authority and the L.M.D.C.,” recalled Tom Angotti, professor emeritus of urban policy and planning at Hunter College.

“L.M.D.C. did everything behind closed doors,” he said. “It was almost impossible to find out what they were doing until they did it.”

Meltzer said the stakes are high for the community at Site Five.

“This is our last large-scale development site,” he said, “and we are pushing as hard as we can to have as much input as we can to make sure that what they promised us when they envisioned World Trade Center, as a way to connect north, south, east and west [Manhattan], is a possibility.”

However, she said, “Currently as envisioned, not happening.”