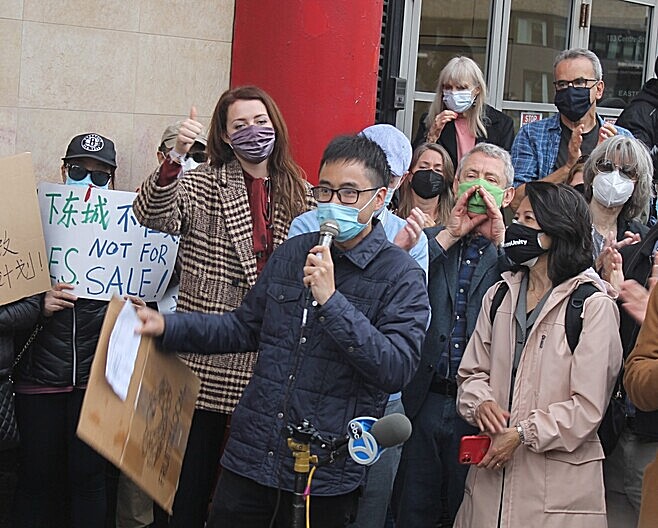 Zishun Ning of the Chinatown Working Group condemned the Soho/Noho rezoning for its "equality in displacement." (Photo by The Village Sun)

BY THE VILLAGE SUN | Residents from all corners of Lower Manhattan rallied in Chinatown Monday to protest what they slammed as the mayor’s “fake social justice plan” for Soho and Noho and demand real protection against displacement.

The opponents warned that the proposed Soho/Noho rezoning — like Mayor de Blasio’s other rezonings — would benefit big developers and landlords, such as, in this case, Chinatown’s Chu family, who own multiple properties in the development area.

The rally was organized by the Chinatown Working Group and held in front of the Eastbank building, at 183 Centre St., near Canal St., a Chu property. In a blow to the community, the Chus recently closed Jing Fong, Chinatown’s biggest restaurant, which was unionized, putting 180 workers out of a job.

Many of the development sites identified in the mayor’s plan are on the border of Soho and Chinatown.

The Eastbank building is right in a spot earmarked for some of the largest development under the Soho/Noho rezoning — development that the protesters warn would displace low- and moderate-income Asian residents and communities of color in the Lower East Side.

“Mayor de Blasio has been criticized for his racist, pro-developer zoning policies that invite developers to build luxury high-rises in communities of color, like East Harlem and Inwood, and reject community-led protective rezonings, like the Chinatown Working Group Rezoning Plan,” said Zishun Ning of the Chinatown Working Group, speaking at the rally. “Now he comes up with this idea to displace the supposedly white neighborhoods of Soho and Noho in the name of ‘racial justice,’ so that he can pit Soho and Noho against communities of color and won’t be seen as a racist. We strongly condemn his ‘equality in displacement’ stand that only benefits big developers, and demand he pass protective rezonings across Chinatown, the Lower East Side, Soho and Noho, like the CWG Plan and the Community Alternative Rezoning Plan for Soho and Noho.”

According to a report by Village Preservation, de Blasio’s rezoning plan would result in demolition of buildings with affordable rent-regulated units, lower income tenants and local small businesses. The rezoning would cause real estate values to rise, and spur harassment of rent-regulated tenants by landlords looking to develop their properties, the group warns.

Instead of the mayor’s plan, which would substantially upzone Soho and Noho and spur a flood of luxury development, the activists called on the city to approve community-based plans, like the Chinatown Working Group plan and the Community Alternative Rezoning Plan for Soho and Noho. The latter plan would include more deeply affordable housing than the city’s scheme — but without the hated upzoning.

Esteban Girón, a board member of Tenants Political Action Committee a.k.a. TenantsPAC, recently co-authored a blistering op-ed against the city’s plan in the Daily News. Titled “A rezoning wolf in sheep’s clothing,” the piece accuses the mayor of trying to push through a few last rezonings to benefit developers but which would only provide “scraps of ‘affordable’ housing for Black and Brown New Yorkers.”

Speaking Monday, Girón decried the Soho/Noho plan as “yet another racist rezoning.”

“It is cruel and immoral for the city to say this plan will help achieve racial equity while they set up hundreds of families in Chinatown for displacement,”Girón said Monday. “Instead of the visionary approach this purports to be, the Department of City Planning is simply dressing up yet another racist rezoning that will displace rent-stabilized tenants of color. We call on our fellow tenants all across this city not to sit this one out!”

The Soho/Noho rezoning would set a major precedent as the first ever upzoning of landmark-protected historic districts in New York City’s history. Andrew Berman, executive director of Village Preservation, blasted the scheme as a disgraceful and blatant “payback” for the mayor’s deep-pocketed developer pals.

“Our lame-duck mayor’s real-estate fire sale would be a bonanza for his developer/donor friends, and a disaster for the Soho, Noho, and Chinatown communities,” Berman railed. “It would put a target on the back of lower-income rent-regulated tenants and longtime struggling local businesses, whose buildings would be demolished for huge new condo and office high-rises that will contain little or no affordable housing. It would destroy some of New York’s most distinctive and historic neighborhoods, but not for equity or social justice as the mayor pretends, but for greed and payback to the developers who have lobbied and donated relentlessly for this plan. We welcome true zoning reform that protects the existing community, its history and its existing affordable housing stock, while creating real new affordable housing, as our community alternative plan proposes.”

Similarly, Sean Sweeney, director of the Soho Alliance, said the mayor’s misdirection is fooling no one.

“De Blasio has attempted to frame his free giveaway to real-estate speculators as ‘housing and racial justice,'” he said. “He never mentions once that some of these same real estate speculators have given big time to his campaign trove. A coalition of true housing-justice advocates — not the mayor’s shills — Chinatown activists and Soho/Noho residents — united in opposition to the Soho/Noho/Chinatown upzoning — speaks truth to the harmful consequences of de Blasio’s scheme: displacement of rent-stabilized tenants in Chinatown and Little Italy; possible destruction of historic buildings there; and elimination of small businesses in these vulnerable communities.”

Pete Davies, a member of the Soho group the Broadway Residents Coalition, warned that de Blasio’s parting plan would be a “disingenuous disaster.”

“Mayor de Blasio is ramming through a reckless upzoning plan in Soho and Noho, a scheme that favors big retail and overscale development,” he said. “This is politics and paybacks, not planning, and it’s a disingenuous disaster for our neighborhoods. Broadway Residents Coalition stands with community groups from all across the city to say NO to the mayor’s failed Mandatory Inclusionary Housing schemes, which do not guarantee a single unit of affordable housing. In fact, the city is incentivizing speculation that puts residents at risk, most notably rent-stabilized and loft tenants, including our neighbors in Little Italy and Chinatown, many aging in place and now facing a future of displacement. We call for a responsible community plan, with housing that is truly affordable for those in need, a fair plan that nurtures and protects the integrity of Soho and Noho.”

“Robert Moses would have razed Soho and nearby neighborhoods and replaced them with an expressway,” Wicke said. “The people fought back then, and we will fight back now! Bill de Blasio and big real-estate interests, behind closed doors, have come up with a new destruction plan: ‘Upzone! Build skyscrapers! Big-box stores!’ All of this by hiding behind a false dialogue of ‘affordable housing,’ not one unit of which is guaranteed to be built. Meanwhile current residents, artists and small businesses are at great risk of displacement. We endorse the Soho/Noho Community Plan for true affordable housing, no upzoning, support for small businesses, and new ways to allow both work/live and artists to co-exist with residential space.”