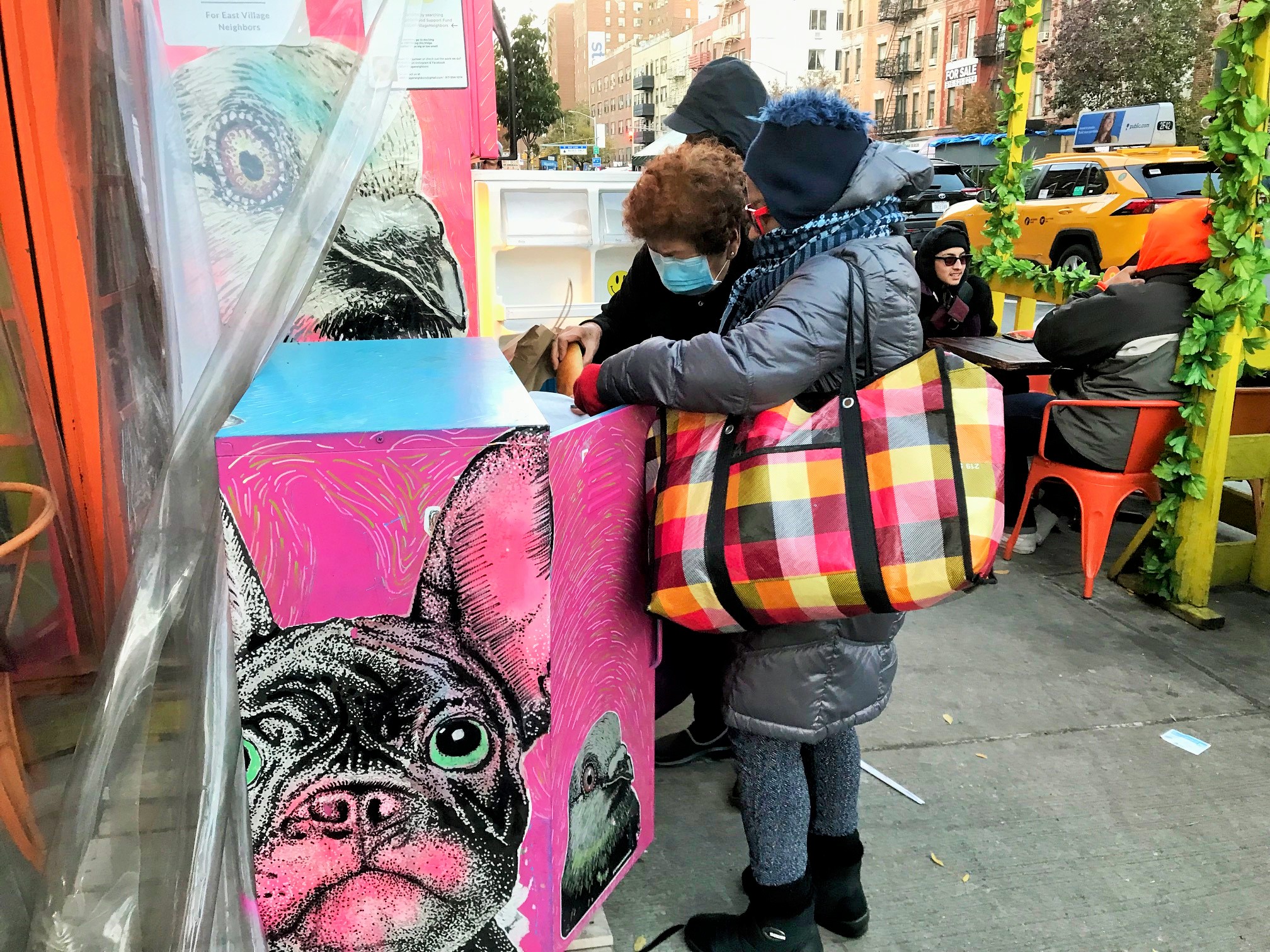 People taking food from the pantry next to the East Village Neighbors community fridge at First Avenue and 12th Street. (Photo by Bonnie Rosenstock)

A tale of two fridges: How a cool concept to combat food insecurity came to be

BY BONNIE ROSENSTOCK | Just a few short blocks from each other, both East Village fridges have recently undergone a makeover.

The vibrantly painted animal graphics on the East Village Neighbors Fridge and Food Pantry, at 197 First Ave., at the corner of 12th Street, is the work of local artist Ethan Minsker. One of the fridge’s founders, Edie Meyer, a consultant in sales and marketing for technologies, met Minsker at an art fair and asked him if he’d be interested.

“Before I knew it, he did it, in September,” Meyer said. “He also designed T-shirts for us as a fundraiser.”

The Loisaida CommUnity Fridge and Food Pantry, on the corner of Ninth Street and Avenue B, is sporting a brand new pea-green outer shell, installed in November, which houses its new fridge. The cabinet was designed, built and donated by the 11th Street Workshop, a large design and production company.

“It was custom-designed to fit the original fridge. When the new fridge was installed, they returned to make alterations to the cabinet to accommodate the new dimensions,” said Reverend Will Kroeze, the pastor of Trinity Lower East Side Lutheran Parish, at 602 East Ninth St., which sponsors the fridge.

The need for a community fridge was never so vital as last year during the pandemic when food insecurity was at its height. Diane Hatz, who lives in the neighborhood, started East Village Neighbors in spring 2020 to help residents who needed assistance with getting groceries, picking up medications and the like.

“We ran that until summer 2020, and then Diane came up with the idea of starting a community fridge, which she and her husband Cesar were happy to host,” Meyer said. (Hatz’s nonprofit, Change Food, which is shutting down, created a guide to help people start community fridges.)

The couple bought the refrigerator and installed it on First Avenue in October 2020, and it was immediately vandalized the first night. So they got a new one.

“I knew it was the right time to act,” he said, referring to creating a fridge and pantry. He asked local state Assemblymember Harvey Epstein and a few other community leaders to get the fridge “up and going.”

“Harvey reached out to Trinity Church as one of the potential places,” Gonzalez said. “Pastor Will and Alex Lawrence, executive director of SAFH [Trinity’s Services and Food for the Homeless], early on helped us work out the kinks. They not only provide electricity and oversight, but we also use their 501(3) c [nonprofit] to allow donations.”

Trinity’s Kroeze said, “Making sure people have access to fresh, healthy food is in Trinity’s DNA. So when we were approached by Harvey Epstein’s office and other community members about hosting a new community fridge, it was a no-brainer for us. It’s a natural extension of the work we’ve been doing. And we couldn’t be happier that we’re able to improve the lives of an even greater circle of neighbors through the community fridge, which is open 24/7, far beyond what we’re able to do in our soup kitchen and food pantry alone.”

“We know that this fridge by itself won’t do much to address the systemic issues that have led to such injustice around food access,” he added. “But we also know that for so many of our neighbors, especially our unhoused neighbors in and around Tompkins Square Park, this fridge is an absolute lifeline.”

Trinity regularly stocks the fridge with food, especially fresh produce, from its food pantry. The church stores cleaning and maintenance supplies that volunteers use to scrub down the pantry and fridge daily when the sanctuary is open. But mostly, the East Village Community Coalition (E.V.C.C.), housed across the street, in the historic Christodora House, at 143 Avenue B, is the fridge’s go-to packaging station and cleaning supply station.

The 12th Street fridge’s electricity angel is Sarita Ekya, owner and chef of S’MAC (short for Sarita’s Macaroni & Cheese). Ekya also makes extra food for the fridge and provides space inside the restaurant for supplies to bag and wrap items before they are placed in the fridge. (They ask that food donations be wrapped in small servings, especially bread, for sanitary reasons.) For a short video on Ekya, “The Mom Who Opened a Fridge in the East Village,” check out the video below:

They will soon be sponsored by the Sixth Street Community Center, at 683 Sixth St., between Avenues B and C, a Loisaida organization that has been serving the community since 1978.

“They are a non-profit 501(c) 3, which covers the Good Samaritan Law, so that if somebody gets food poisoning from something that somebody put in the fridge, they can’t sue you, because you’re doing it as a Good Samaritan,” Meyer said.

The fridges’ pantries are utilized by a wide variety of people and for a variety of reasons, with no check or judgment.

“Families, people just short of money [use the pantry]. Some put in the raw ingredients and take out cooked meals because they don’t have time to cook,” explained Meyer, who runs the volunteer group. “The nearby Sirovich Senior Center residents use it frequently.”

Paul Gale is the tech whiz who put in place the systems that run the fridges efficiently. At the beginning of COVID, Gale, who produces corporate and nonprofit livestreams and edits videos, worked with Laura Sewell, E.V.C.C.’s executive director, to help create an online map of essential businesses that were open in the East Village, such as pharmacies, laundromats, bodegas. As a result, he had a complete list of all the businesses, their hours and phone numbers and contact information.

Gale then paired up with the East Village Neighbors fridge and developed a database for them of potential donors and food purveyors in their area. Using Airtable, he created a volunteer management system from scratch, which would allow them to post food rescue opportunities for people to sign up for online, and provide the volunteers with pickup instructions. (Alexis Lucero assists Gale with admin work on the volunteer side for the Loisaida Fridge and also volunteers.)

Both fridges receive food donations from local restaurants, bakeries, coffee shops, local schools, CSAs and other businesses, as well as from neighborhood people, some of whom cook or buy food for the fridge.

“Students at N.Y.U. decided they didn’t like their food in the cafeteria, so it was being thrown out every night,” Meyer said. “So they packaged it for the fridge.”

When the Loisaida fridge was about to be launched, on June 15, 2021, Gale was tapped as part of the administrative team.

“I was living with my parents in New Jersey, like a true villain during the height of the pandemic,” he admitted. “I wanted to help out the neighborhood remotely, even though I wasn’t able to be here. I lived here for five or six years, and I’m now in Greenwich Village. But I care about this neighborhood and feel a connection to it. My great great-grandparents and grandparents came to the Lower East Side, and they struggled, and there are people who struggle today. This is not the only way to do it, but to me it’s a direct, beneficial mutual aid, to reduce food waste.”

“This is a place that cares about the neighborhood,” he said. “I used to spend my afternoons on my phone. Now I’m delivering hundreds of pounds of groceries to people in need. That seems like a better use of my time.”

Volunteers are the heart and soul of the effort’s food collection, rescue and delivery. To become a volunteer, go to the Facebook pages of East Village Neighbors or Trinity Lower East Side Lutheran Parish.

There are also two plant-based fridges in the area. One is located near Overthrow boxing gym on Bleecker Street between Bowery and Lafayette St., and the other is on Broome Street between Essex and Norfolk Streets.