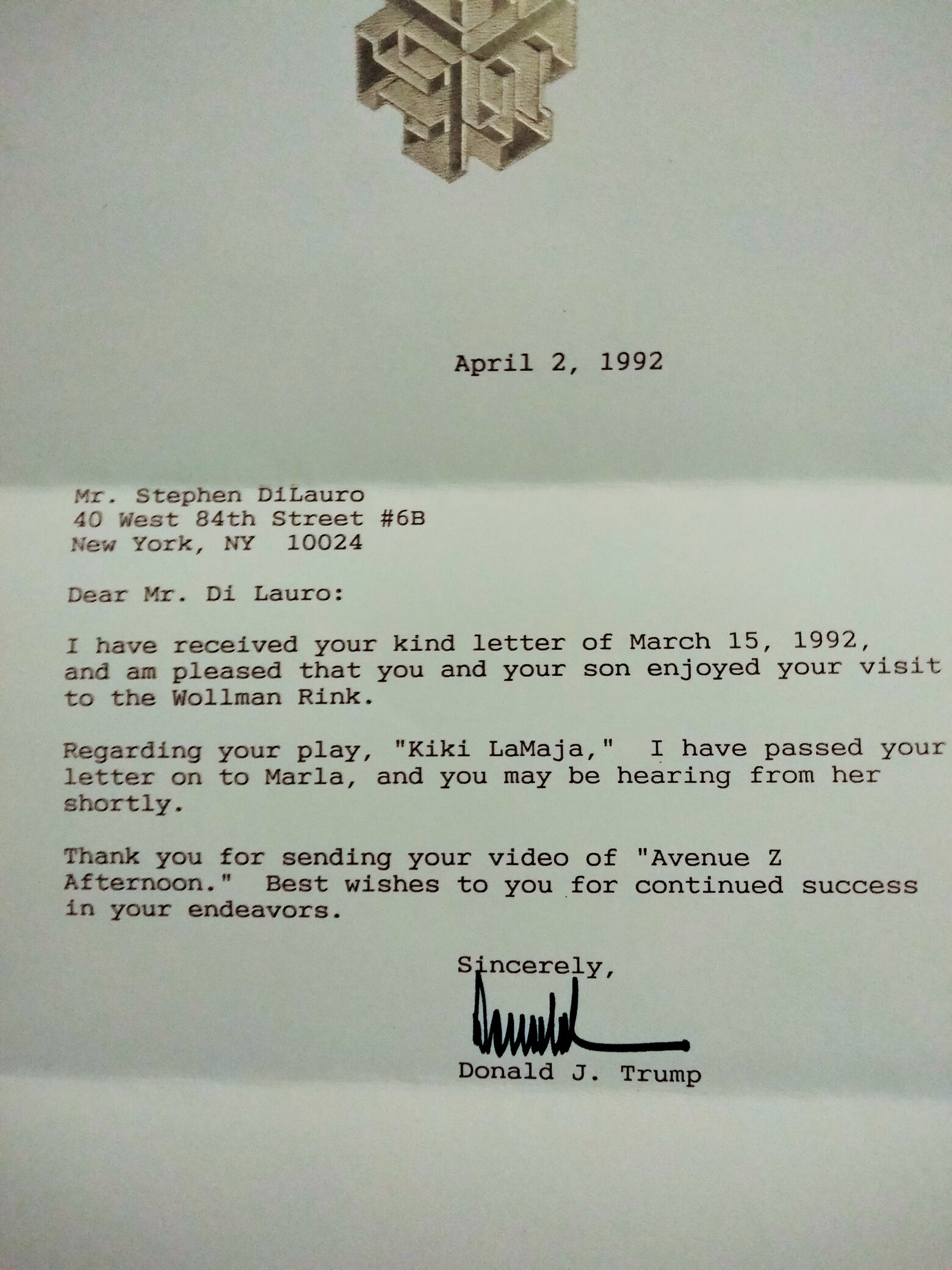 The letter from The Donald that will be up for auction in September. (Courtesy Stephen DiLauro)

A letter from Donald Trump to a playwright

How I came to receive a letter from the then-future president is quite a story, as is finding an auction house willing to put it on the block. Alexander Historical Auctions in Maryland is where the sale will take place in September. It took me awhile to get to them.

First, I tried a prominent autograph auctioneer here in Manhattan. I was told they are not handling any Trump autographs at the present time. The representative with whom I spoke suggested waiting until the ex-president dies. I’m not all that much younger than Donald Trump, and, as we all know, tomorrow is promised to no one.

The next place I tried specialized in auctions of autographs and guns. It was out West. It seemed to me a natural match. I received a rather snippy reply, saying, “This is not something we would handle.”

I tried a celebrity autograph auctioneer in Los Angeles. They estimated the letter would bring $400, which seemed low. I mean the guy had his own reality TV show and he was president of the United States; and I am a New York playwright, regardless of my limited commercial success, so far.

Let me take a moment to assure readers that I did not vote for Mr. Trump in 2016. Nor did I vote for Ms. Clinton. I voted for me.

I ran a campaign on the Internet as the Bohemian Sci Fi candidate. My platform was free beer the entire time I would be in office. If elected, I would have declared a War on Thirst. I also swore to put bots on the ground, not boots. My slogan was “Give us back our goats. Washington got my goat. How about you?”

I polled in the mid-to-high three figures, as near as I can tell. No one would cover my campaign. A booker from one of the morning cable news shows told me that free beer was something people might take seriously. That was the whole idea.

But in 1992 neither Donald Trump nor I were running for president. I met him at the Wollman Skating Rink in Central Park, where he had just overseen the renovation. The story goes that he had been driven nuts watching incompetent city workers attempting to complete the task. He offered to take over the renovation and get it done within a certain amount of time at his own expense. The city accepted. He delivered.

I was at the rink dropping off my son to be taken home by the mother of one of his friends. My son’s mother was not talking to me at the time.

So, I’m standing there watching my kid skating and I look to my left and there’s Donald Trump watching people enjoy his gift to the city. I thanked him for what he did and complimented him on it. He asked me if I wanted to walk with him over to The Plaza. Since I was already relieved of my paternal responsibility for the day, I accepted.

As it happens, I had recently had a near-Trump experience. I was kind of hot as a playwright at the time. The late Lauren Bacall had compared me to Chekov while introducing my General Motors Mark of Excellence television adaptation of “Avenue Z Afternoon,” a one-act I wrote. It was on the A&E network as part of the Playwrights Theater. That was back when the “A” in A&E stood for “Art.”

As a result, when I wrote “Kiki LaMaja,” a full-length comedy set in the art world, and let it be known that Marla Maples Trump would be perfect as the title character, her publicist showed up at a reading. He told me he liked the play and would talk to Marla about it. That didn’t happen.

For anyone who doesn’t remember, Chuck Jones was a shoe fetishist. He was arrested and did time for stealing a bunch of Marla’s high-fashion shoes. This took place shortly after the reading. He eventually became Marla’s stalker and continued to have problems, as a result.

So, when the billionaire future president and I walked through Central Park to the Plaza hotel, I pitched him about the play. He told me to send it to him. I did so, along with a videotape(!) of the “Avenue Z Afternoon,” which we had also talked about. The story was set in housing that was built by Fred Trump, Donald’s father.

His letter came back a couple weeks later, thanking me and saying he’d passed my letter along to Marla. He mentioned the two plays — “Kiki LaMaja” and “Avenue Z Afternoon.”

As a result, the auctioneer requested and received manuscript copies of both plays, along with a DVD of the Nederlander TV production, all autographed by your humble correspondent.

I never heard anything more. However, Trump did take the time to dictate and send me a personal letter. That’s more than I can say for some literary agents, nonprofit theater admins and a lot of, but not all, producers in this town. Those people could take a lesson in manners from Donald Trump.

So now, 30 years later, I’m putting the letter up for auction. Maybe the result will make my winter holidaze a bit more fun. Who knows?

DiLauro is a playwright and critic. His award-winning public radio storytelling and music series “River Tales” is available on major music-streaming platforms.