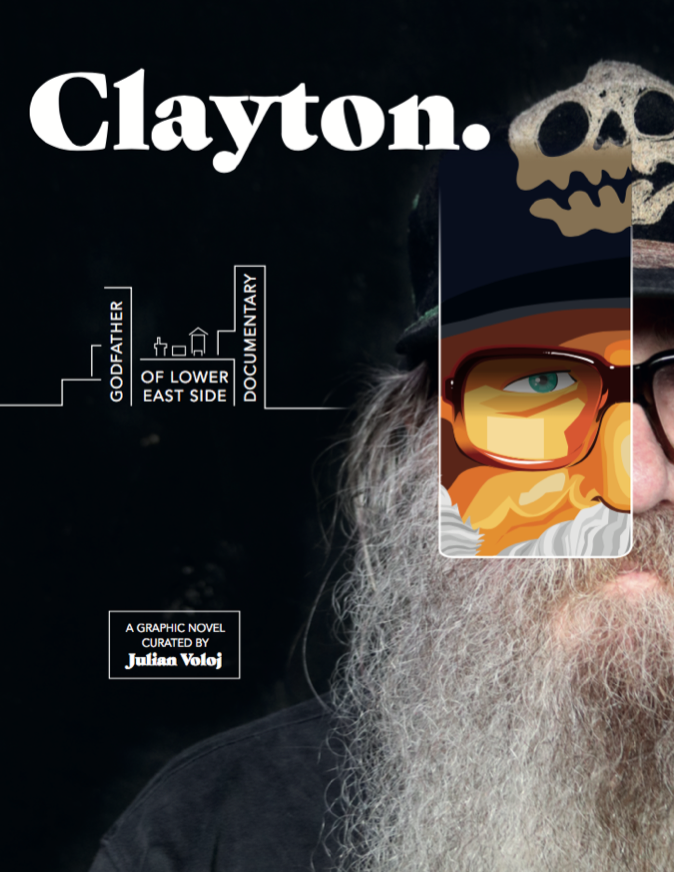 The cover of the new graphic novel on Clayton Patterson.

BY ISAAC SULTAN | Clayton Patterson and his wife Elsa Rensaa’s renowned residence at 161 Essex St. on the Lower East Side contains a hoarded treasure trove of relics and memories.

An overflowing collection of cultural artifacts, from heroin baggies and mosaics to embroidered baseball caps and thousands upon thousands of photographs, document the extraordinary mundane of their neighborhood.

Patterson is a self-described “artist-documentarian,” an icon of the Lower East Side and now the subject of a new graphic novel, “Clayton: Godfather of Lower East Side Documentary,” edited by Julian Voloj.

The book’s chapters bring alive the contents of 161 Essex and illustrate the adventures of Patterson’s life. We learn about his blue-collar beginnings mixing with cowboys in Alberta, Canada, and attending art school, then follow him on his journey to the Lower East Side and photographing punks at CBGB on the Bowery. As a whole, the arc of the graphic novel bears witness to New York’s tumultuous 1980s, narrated by one of the city’s most captivating characters.

At a moment of rampant gentrification and development in New York, Patterson and his story stand as evidence of a bygone era in the city’s history. The pages of the book serve as a time capsule of a New York that is slowly fading from memory.

“New York was always a place you could come to if you were broke,” Patterson said. “Somehow you could come here broke and survive. Now, you come here with only $100 in your pocket, you’re screwed.”

Patterson and Rensaa arrived in 1979 and they stayed. They first settled in Soho, on Broome St., but the documentarian found that art scene too elitist, all about money and glitz.

Through a connection, they subsequently found their building on Essex St., on the more real and gritty Lower East Side, and have been there ever since.

“I’m not interested in famous people,” Patterson says in the book. “I’m interested in the man on the street. The people who define what the neighborhood is and was.

“I’ve always found it to be much more of an interesting journey to pick up the rare, the unique and the beautiful,” Patterson said.

“The Lower East Side was a fascinating place full of outlaw culture,” Patterson said. “There were few restrictions but many opportunities. It was a free-for-all climate that allowed creativity to take place.”

Under Voloj’s editorial direction, the graphic novel combines the work of 18 different visual artists. In this way, each chapter of Patterson’s life is told by a different hand. The unique format results in an eclectic and varied collage of artistic styles and feelings. It’s a fitting medium for someone who has lived as freewheeling a life as Clayton Patterson.

The book is done in what’s known as fumetti style, meaning using photos and word bubbles.

“Cartoons and comic books were really the staple of America,” Patterson noted. “We all grew up on comic books of one sort or another. I think the graphic novel [format] worked really well. It’s nice having the opportunity to reflect on different periods of your life.”

Patterson was previously profiled in the 2008 biopic “Captured,” by Dan Levin and Ben Solomon. But even longtime Patterson friends and fans will likely find some new information here. For example, in one chapter, we learn that the documentarian and his father both shared the same strong-minded personality — so it was basically impossible for them to be together. On top of that, the senior Patterson was a religious fanatic who wouldn’t let his children watch TV or dance. Not surprisingly, Patterson left home early.

In the book’s forward, Eddie Portnoy writes, “The story of Clayton, that of an Albertan farm boy who leaves home, lands in a crumbling immigrant neighborhood in a bankrupt city, explores the wide variety of local subcultures he finds, begins documenting them obsessively, often at great risk, gets arrested numerous times, winds up on network TV for exposing a police riot, is one that celebrates a disappeared portion of New York City, one that many people considered repellent, but which was equally as rich as any culture anywhere.”

“I think anybody could do what I did,” Patterson reflected. “I think that’s an important message [from the book]. Just follow your dreams and do whatever it is you think you should be doing. And somehow, it seems to work.”

“Clayton: Godfather of Lower East Side Documentary,” edited by Julian Voloj (Permuted Press, hardcover, 112 pages), is now available for purchase in hardcover for $21.99.