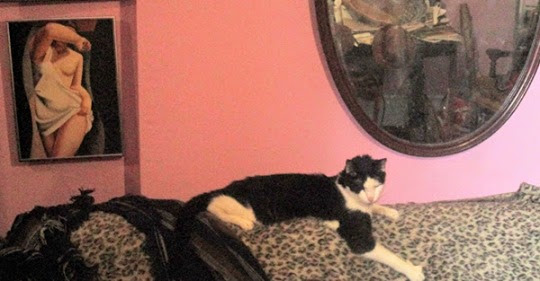 BY MARY REINHOLZ | On a recent Sunday in Manhattan there was a death in my family. I’ve been stumbling around since then like a paralytic, wondering if I care to go on without my beloved Sam Spade the Second greeting me in the morning with an imploring look in his green eyes and allowing me to hug him at night. He was aloof and fearful of strangers but always there for me — mewing, scratching furniture, knocking the mouse off my computer table to announce that he wanted to be fed.

Every day I would give him at least three meals from the nearby Petco in Union Square, more as he became ravenous in old age. And every other day I’d empty his litter box, refill it and haul his waste outside to the street in large black garbage bags. In the early afternoons, when I’d take a break from writing and interviewing people on the phone, I’d rub Sam’s belly and listen to him purr. Often I’d croon ridiculous endearments: “Hello Sam the man, my fuzzy sweetheart.”

This was a ritual that lasted 14 years in the cramped studio that I shared with my rangy black and white rescue cat and the love of my life. Now there’s an ominous sound of silence where I live and work and a void in my daily routines. But sometimes I hear love songs in my head, especially the one that begins, “My world is empty without you, babe.”

Sam had been given to me when he was a year old by a white-haired woman named Marjorie whom I had met at the 15th St. Quaker meeting house in Stuyvesant Square. She’s a retired academic who at the time cared for at least 15 abandoned felines in her spacious Brooklyn apartment. Friends at Quaker meeting call her The Cat Lady.

When I told Marjorie a couple of months ago that my Sam was getting thinner and maybe needed tests that I couldn’t afford, she offered to raise money to get them for him but noted cats tended to lose weight as they age. She advised me to let nature take its course, “if he’s not suffering.” He wasn’t and I told her it was my hope to predecease him, languishing peacefully on my Victorian bed as he purred his wisdom snuggled up on my shoulder.

In my tribute to Sam on Facebook, I noted he had outlived my ex-husband in Buffalo and two old boyfriends from my native Los Angeles. I was shocked and saddened by their premature deaths but shed no tears. We hadn’t seen each other for so long. Besides, Sam was more loving and reliable than any of  his two-legged counterparts.

And so I wept copiously when a young female vet at the Animal Medical Center on E. 62nd St. examined him that Sunday and  told me in a private room: “Sam is trying to die.”

Sam had seemed O.K. the night before. But early the next morning, he barely touched his can of turkey and giblets and I noticed he seemed to weave to the side as he headed to the litter box. Then I went out in a drizzle to pick up a few things at a CVS. I found him in the bathroom an hour later, hiding behind the tub and barely breathing. I rushed him by cab along the F.D.R. Drive to the Uptown animal hospital, telling reception at the second-floor E.R. that he seemed close to death.

As I spoke to the vet, I asked her if there was anything she could do to keep him alive. She shook her head.

“It would cost thousands of dollars in tests,” she said.

She handed me a tissue as my tears came pouring down like the driving rain outside. Soon she brought Sam to me in his bright blue carrying case, prepared to euthanize him. He lay on a blanket and didn’t react to my touch. But I kept stroking him as the vet murmured, “Remember, he’s in your heart. He’s in your soul. He’ll always be in your life.”

He was still breathing when I left the E.R. I took a bus back to my Downtown neighborhood and e-mailed my niece Jennifer, whose teenage daughter also loved Sam.

“He was a gentle gentleman cat,” Jennifer e-mailed back. “He enriched our lives”

Old friends were quick to offer their condolences.

“I know how much you loved Sam Spade,” said Julie, a former roommate who’s a ghostwriter. “There is no way to replace our precious animals.”

Years ago, when I was living with Julie on W. 14th St., I read Nobel Prize winner Doris Lessing’s famous short story “An Old Woman and Her Cat,” about a widow in London estranged from her adult children. But she has her faithful tabby to the end. I was in my 30s then, but knew that the Lessing story foretold my current situation as a childless over-the-hill dame finding comfort with cats in old age.

After Sam’s demise, Lauren, a Facebook friend, posted: “Sorry Sam will not be with you, but he may have a few more lives left.”

She may be right because on the second night after his passing, I heard a meowing sound near my computer table and hours later some whimpering that seemed to come from under my bed. It sounded like Sam when he was really hungry.

A newborn named Sloane lives in the basement apartment directly below me, but the baby’s occasional wails are completely different than Sam’s. When I told Jennifer about the mysterious sounds, my niece said, “Of course it’s Sam!”

I didn’t tell Jessica, Sloane’s beautiful young mother, how Sam was not just crying but also scratching at my door.  I did tell her in the hall that he was officially dead.

A couple of days later, Jess showed up at my door with a bouquet of red chrysanthemums and a  sympathy card. It had a black cover festooned with gold stars.

“When it rains, look for rainbows,” the printed words said. “When it’s dark, look for stars.”

Yes, Sam was right when he reminded me just the other day that friends can help get you through the night. And thanks, Sam, for leaving me a tuft of your fur. I’m keeping it in a little black box on my bed stand. See you for breakfast in the morning.