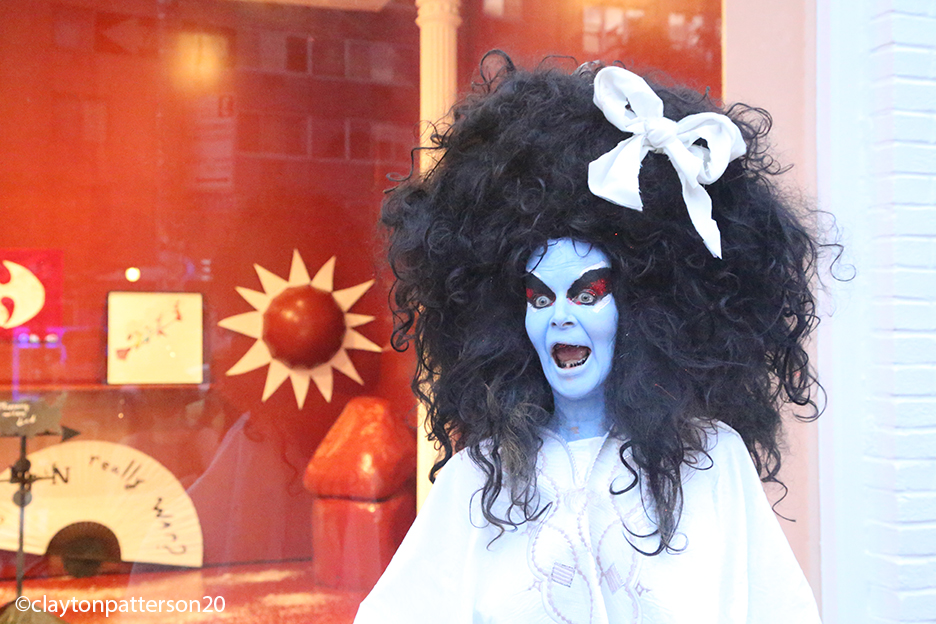 Not surprisingly, Kembra Pfahler made an immediate impression on the writer. (Photo by Clayton Patterson)

A documentarian looks back at the end of COVID summer

BY CLAYTON PATTERSON | I’m taking a step back and thinking of summer highlight moments.

I would start with Kembra Pfahler’s show “Slippery When Dead” at the Hole Gallery on the Bowery. Like most of Kembra’s shows, the whole environment is an integral part of the whole show. Beautiful, well done, perfect as always, with Kathy Grayson looking on with pleasure and enjoyment.

The first time I remember photographing Kembra was at a small gallery on Forsyth St. She had an interesting look. I seem to remember the gallery was called Pompeii, owned by Edgar and Helen Oliver.

As time went on, we crossed paths many times, in film and video, like Naked Eye Cinema. Kembra was an actress playing a zombie in Ari Roussimoff’s dark, desperate movie “Shadows in the City.” I was the art director. Other times, we found ourselves involved in the tattoo world.

I also got to thinking of the late David Peel after noticing a Peel birthday celebration. David has been a symbol of Downtown street musicians, spanning from Washington Square Park in the ’60s to Tompkins Square Park into the 2000s, and still going strong with the Aug. 3 streaming birthday event on Facebook.

David first became famous with John Lennon and Yoko Ono, and earned his street fame playing at all the anti-gentrification protests and the pot legalization marches. The man, the myth, the legend, the acoustic guitar, the sunglasses, the leather jacket. The guy who was everywhere.

As a street musician, David Peel was a constant. Always showing up at all the protests, bringing his acoustic guitar and his music. Always welcome. He passed from this world three years ago but people still celebrate his birthday. I am remembering David.

MM Serra is the hardest-working person in the New York City experimental  avant-garde film and cinema scene. She curates shows all around the culture world, from Pompidou in Paris to the National Gallery in Washington, D.C.

MM Keeps the Film-Maker Coop operating and active. She teaches at sophisticated education centers, like The New School, Parsons School of Design, N.Y.U. She is the film resident and author, as well as curator of film at Ludlow House. She is an NY ACKER recipient. Always dressed like an avant-avant-garde queen. An active 6&B gardener.

If you are like me, you miss the Polish restaurants. Teresa’s was one of my favorites. One can relieve the memory at Saturday Is Takeout Food Day at J. Baczynsky East Village Meat Market. A full menu with a good-sized portion of fabulous home-cooked quality meal. All the standards one remembers. Always top quality. My only criticism is it would be good if the prices were listed. I got a number of days’ pleasure out of a takeout. Tasty. Good service.