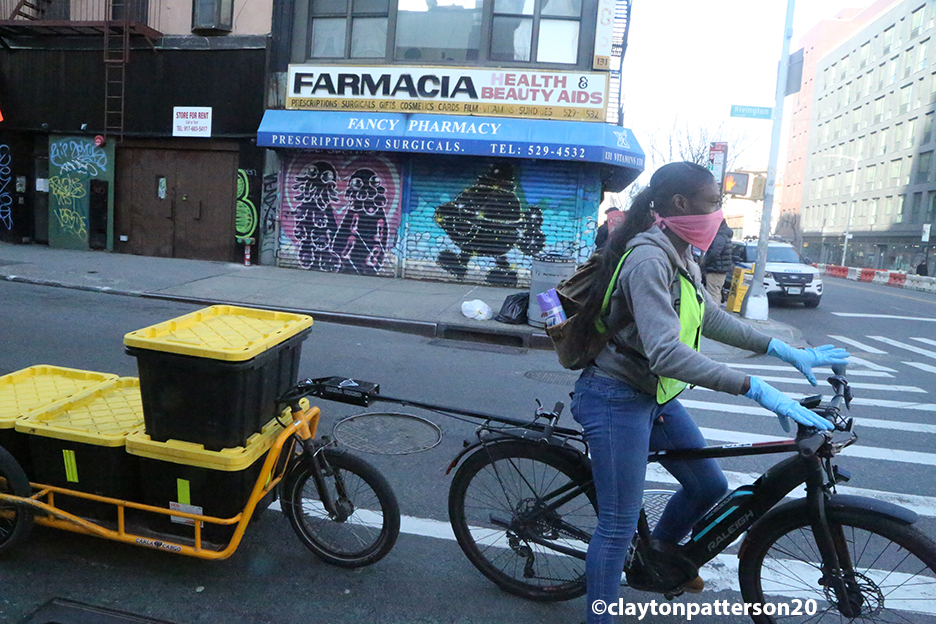 An Amazon cyclist pulls Whole Foods deliveries to customers on the Lower East Side. (Photo by Clayton Patterson)

Workers are still bravely working it

BY CLAYTON PATTERSON | Over the last week as things started to wind down, I was interested in capturing people at work.

Vicki Rovere is a product of the ’60s. She’s a member of the War Resisters League, supports anti-war protests. She follows that up with the DIY protest buttons she makes and sells, community sharing and support.  She is most neighborhood-famous for her “free store” on Ludlow St. between Stanton and Rivington Sts., which she has run for years.

Vicki is a garbage picker and dumpster diver. I would witness her, almost daily, going by with her little cart for carrying her discoveries. She fills the cart with clothing, household items like pots and pans, clothing, books, things that are not garbage and should be saved. She then places them on hangers and hangs them up along the street in convenient places, and displays them in boxes and lets people pick up whatever is usable for them for free.

In this crisis she has been picking up food stores’ throw away and giving them to shut-ins for free. Yesterday she had oranges and grapes and they were nice looking. I had my own supply, so I told her to share with someone else. It was very generous of her.

During the day now, the Lower East Side’s streets have the same kind of emptiness that you see around the Christmas holidays. At night the streets are almost empty.

Most of the people out on the street are delivery people on bicycles. The Amazon bicycles with a pull-wagon of plastic containers full of Whole Foods deliveries have become a common site. Workers at other stores are daily busy with deliveries.

Our firefighters are on point working to protect the community. Cop cars can be seen on the street. There’s a School Safety bus parked outside P.S. 20, on Essex St.

I saw Kammal Mohammed from Falafel Guys on Rivington St. talking to a Seventh Precinct cop on the need for businesses to work together with police for community safety.

The little soda, beer, candy takeout store on Rivington St. next to Falafel Guys has been robbed at gunpoint a number of times. And crime is up.

The M.T.A. buses are still running but are empty or almost empty.

Restaurants and cafes and more and more stores are doing window/door service. They are open limited hours. One surprise is window pickup alcohol drinks. Alessandra Zeka, a documentary filmmaker, showed me a first, the cocktails to go at El Sombrero, at Stanton and Ludlow Sts. Iggy’s bar on Ludlow St. has window service.

In our neighborhood, the little stores, the bodegas, tend to have toilet paper and hand wipes.

A community group will do shopping for shut-ins.

And Muslim merchants who are still working lock the door and do daily prayers inside the shop, then open back up for business.