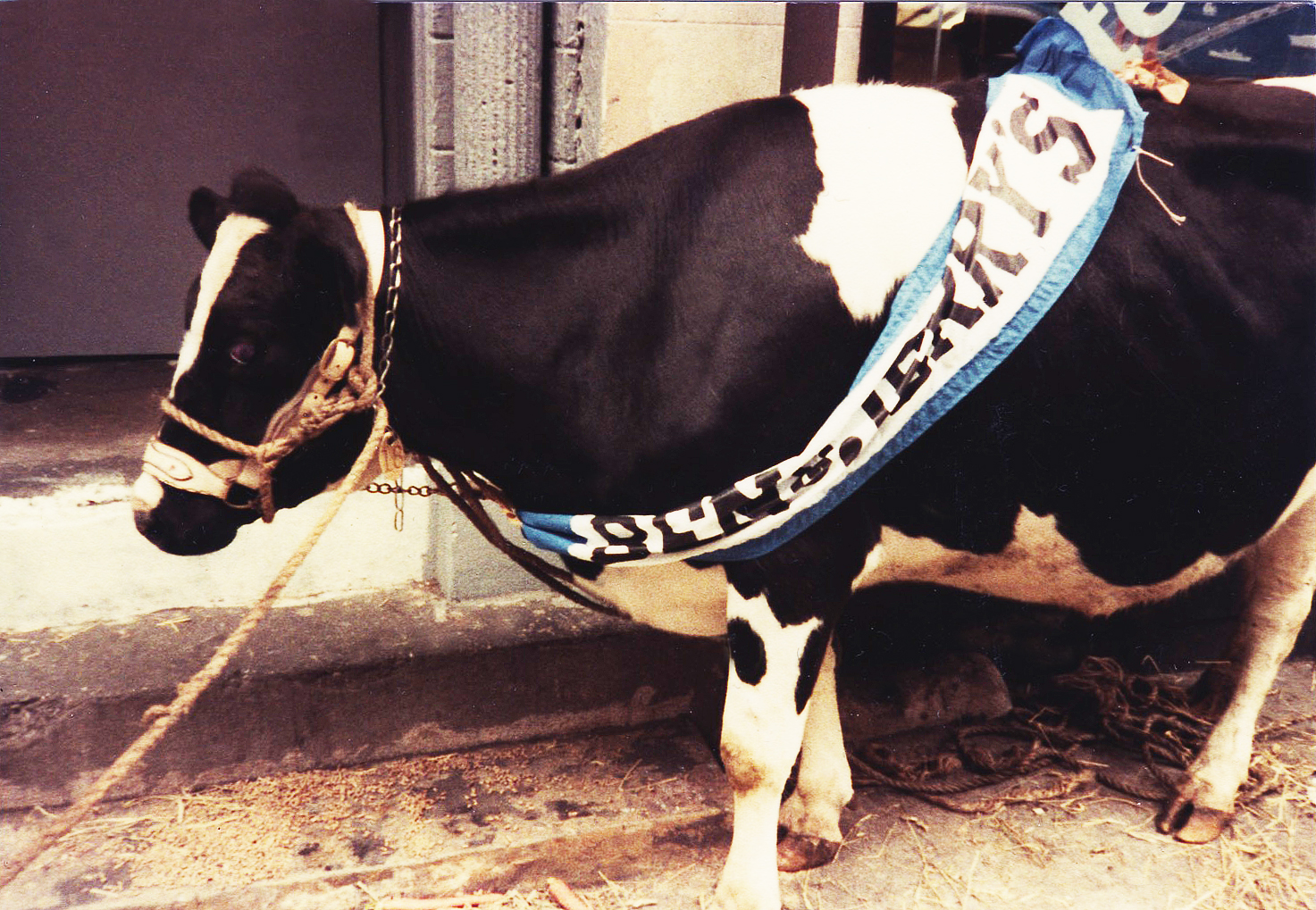 Ben & Jerry's put a cow in front of an ice cream shop on Spring St. in the 1970s as part of a promotional campaign. (Photo by Harry Pincus)

BY HARRY PINCUS | Back in the Seventies, Ben and Jerry ran a promotional gimmick in Soho. They placed a lovely black and white cow on Spring St., in front of Wally’s, the ice cream parlor where Woody Allen wooed Mariel Hemingway in “Manhattan.”

These two chubby Jewish boys were trying to compete against the established and exotic Haagen-Dazs (our friend calls it Hoggin’ Dis) which really wasn’t so exotic after all, as the founder was also a Jewish boy from Brownsville, Brooklyn.

In those days, I had a wonderful friend, Alan, who had bought a 200-acre farm in southern Vermont. He was a Yale Drama School graduate who wanted to create, not a commune, but a sort of refuge for good people.

I was always welcome on that beautiful old farm, and Alan even offered to sell me 10 acres for $3,000, when I was 22 years old. Perhaps I could have been a Bernie Sanders, as I thought of buying an old railroad caboose and hauling it up the mountain.

As fate would have it, my parents were still here in the city, and they were getting old, so instead I bought a loft in a deserted harpsichord factory. A friend was looking for someone to buy an apartment on the fifth floor of the new co-op she was organizing, in a deserted area of Lower Manhattan, and none of her friends could come up with $4,000. I was the only one who had saved this vast sum by driving a cab all night in the South Bronx, loading trucks at the Post Office, also all night, and working as a messenger and office worker. And so it was that I bought a home here, in what became Soho, instead of in Vermont.

That was back in 1975, and after all of these years, I am being sued in the Southern District of New York by a Westchester attorney, the son of the people I trusted back then. The son is unable to sell his mother’s next-door apartment, which she never happened to legalize, and is subletting. He is using his two Ivy League degrees to claim that I “do not own” my own legal apartment “at all.”

In spite of my original stock certificate and proprietary lease, my city certification as an “artist in residence,” and all of the sweat equity that I poured into settling this old factory, my existence is not recognized by the Westchester attorney, who grew up next door, or the current, wealthy absentee owners of the co-op. This seems somehow to be in keeping with the Soho rezoning travesty, which will actually penalize the original artists who revived the old factories. Now, even the City of New York will no longer recognize the protections that were promised us when we turned the deserted old factory buildings into Soho.

My Vermont friend Alan was a great man, who, as a Jew with hippie friends, was hounded, reviled and finally sued, by the morons in Readsboro, the nearby hamlet. The crime was allowing his young friends to skinny-dip in the stream beside the old wooden mill. But, in a sense, my friend was driven out, just as the folks who are suing me today are trying to drive my family out of our only home.

In truth, Alan’s dream was destined to be riven by the fates, and by the brutality of life on the old farm. When he managed to raise a little glass dome over the farmhouse, a hawk flew into it and shattered the glass. The family dog was shot in the eye by a hunter, and the new concrete foundation for the farmhouse cracked. Finally, Alan’s 1939 tractor fell on him and broke his hip, and it was time to relocate to the small Vermont city of Brattleboro.

I had always been welcome on the old farm, through all of my youthful romantic crises, and whenever I had finished an exhausting run of illustration deadlines. We used to sing in the back of Alan’s 1950 Ford truck, the old “Okie truck,” as we bounded down the Searsburg Pass, accompanied by the sweet smell of wood fires and the brightly colored leaves that meant that time, and a season, was passing.

I loved those rolling hills of Vermont, but I would have to say farewell to that farm, and to my youth, and then finally to my dear friend. He is fittingly memorialized by a small marker in a Brattleboro graveyard that says, “He loved his fellowman and sought no higher calling than to do good.”

Alan would be happy if he knew that another writer, Saul Bellow, would soon be interred nearby, and I think of him, whenever we are fortunate enough to head up north.

In Brattleboro, Alan’s widow met another good man, a political activist who wrote a column for the Brattleboro Reformer and a book about Abbie Hoffman. He was also a transplanted New York Jew, who had lived on a commune and been one of Bernie Sanders’s earliest advocates. As much as I liked and admired my new friend, we always seemed to argue about Israel.

There aren’t so very many Jews in Vermont, and I recall that one of them told me that she had to travel 60 miles to see another one. They seemed to fit the rugged landscape, though, which Alan had likened to what his grandparents must have known in Russia.

When the horror of 9/11 struck our neighborhood, I waited until the smoke had cleared and fled to good old Vermont with my wife and young children. They were about to have a town hall meeting in Brattleboro, but of course I wasn’t invited, and we met our friends afterward for dinner. There was a cold mood that evening, as the meeting had been called to discuss the 9/11 attacks. Since I was probably the only eyewitness in town, I wondered why I had not been asked to recount what I had seen.

“That’s all right, Harry, we saw it all on TV,” said my friend, even though the TV was not being attended to, and the mushroom cloud I had just seen on our street corner was not even 11 inches high on the screen. The folks in Brattleboro were organizing a peace march!

They were probably doing the right thing, because war is never a solution. But I was now a refugee, and didn’t know if we could ever return to was left of our neighborhood. I became angry and asked, “If someone kicked in the kitchen door and raped your wife, would you organize a peace march?”

It was a sad ending to a long friendship.

A few days ago, Ben & Jerry’s ice cream announced that they would not sell their ice cream in what they call the Occupied Palestinian Territory. Ben and Jerry no longer run the company, which is now a part of a vast international conglomerate called Unilever. But the company’s decision to join the Boycott, Divestment, Sanctions movement directed at Israel was probably cheered by many of my old Vermont friends.

If the boycott is acceptable, and adopted by other corporations, Israel will become a pariah, and Hitler’s original plan to boycott, divest and sanction the Jewish people will once again come to pass. Of course Unilever is not opposed to selling their product in the rest of Israel, because there is money to be made.

I guess that Hamas and Iran, which have vowed to annihilate the Jewish state and drive the Jews into the sea, are no better than Israel. There are numerous despots, dictators and corporate criminals in this world who might possibly be boycotted, as well. Indeed, every corner of this earth is full of injustice and inequality, and yet it is Israel that is always there to be culled out and punished by these self-appointed righteous souls, like the board of Unilever corporation.

As for my old friends in Vermont, do they think that they will never be identified as Jews, and someday driven out, as Alan was — and as my “neighbors” are trying to do to me? When Bernie supports people who say that Israel, the only refuge of the Jewish people, is “all about the Benjamins,” does he think that he is safe now that he is a Vermont Yankee? By the way, that would have been pronounced “Yen-kee,” by my grandfather, and probably by Bernie’s father, a Polish refugee.

I recognize that there is injustice on both sides. But I don’t think that boycotting Israel is going to lead to equality or a better life for the people of Gaza or the West Bank. Hatred merely begets more hatred, and if the existence of Israel is not even recognized, there will only be more war.

I don’t eat much ice cream anymore, but I’m going to Boycott Divest, Sanction Ben & Jerry’s. I don’t like their new flavor. In fact, I don’t think it’s new at all.