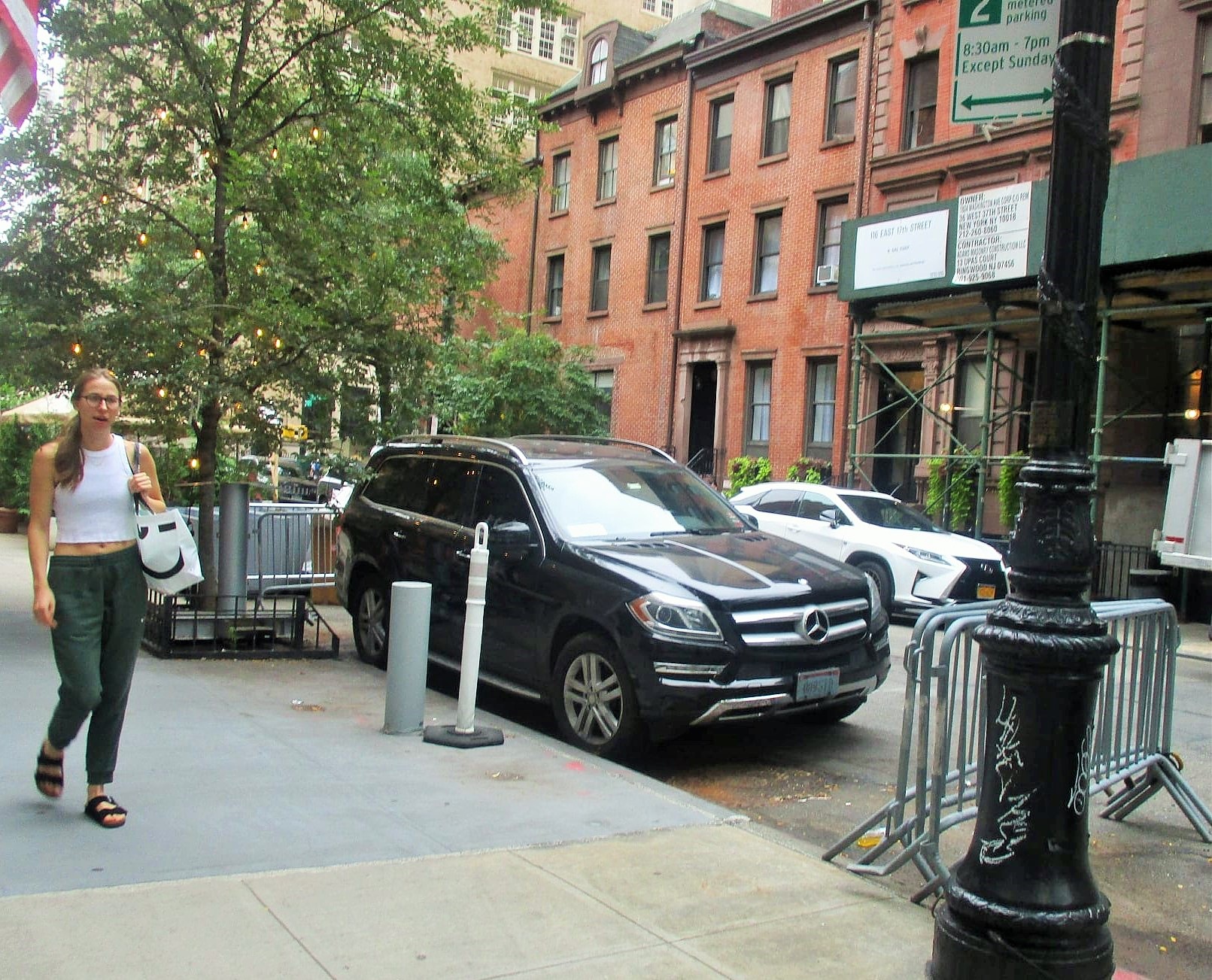 The diplomat illegally cordons off a parking spot on the street for his Mercedes SUV, above, by using metal police-style gates. (Photo by Mary Reinholz)

BY MARY REINHOLZ | At night, a tree outside the Gramercy townhouse sparkles with lights, some bouncing off a black Mercedes SUV with diplomat plates. A sign on the townhouse door sternly warns would-be intruders against entering a “diplomatic residence.” A black-and-white American police flag with the controversial thin blue line hangs from the 121-year-old brick building right next to Old Glory and above a profusion of fake pink flowers at 119 E. 17th St.

The building’s owner is an accredited diplomat: Paolo Zampolli, a high-flying Milan-born former modeling agent and friend of Donald Trump-turned-New York City realtor and a United Nations ambassador (Oceans and Seas) for the Permanent Mission of Dominica, a Caribbean commonwealth. His wife, Brazilian fashion model Amanda Ungaro, is a U.N. ambassador to Grenada. The couple shares a young son. Giovanni.

Papa Zampolli, 51, who famously claims he introduced Trump to Melania Knauss, keeps the aforementioned black Mercedes SUV throughout the night and into the day at a metered two-hour parking zone that extends from 8:30 a.m. to 7 p.m. except on Sunday. City guardrails secure the spot on either side of the vehicle. It’s a parking methodology that has drawn concern from neighbors, including this reporter, who started checking its legitimacy with government agencies, including the city’s Department of Transportation.

It turns out that Zampolli’s use of guardrails to cordon off  the SUV for its protracted stays on a public street constitutes a violation of a New York City traffic rule stating it’s unlawful for any person to “reserve” a parking space on a public street via “any box, can, crate, handcart dolly or any other device.”

Assemblymember Harvey Epstein, whose district covers Gramercy, blasted the parking behavior at the ambassador’s address, telling The Village Sun in a statement: “No official is above the law. Reserving a parking space using city barriers is not what they’re intended for and this is illegal.”

An official with the U.S. State Department, who asked not to be identified, said the agency has no record of issuing diplomat plates to Zampolli. The official also noted that the State Department “expects foreign missions and mission members to comply with local laws and regulations.”

Diplomats who flout parking regulations have long plagued New York, resulting in the city losing an estimated $16 million in unpaid tickets and fines starting in the aughts, according to a Wall Street journal investigation in 2014.

City records show that the black Mercedes with license plate 009 STD that is parked in front of Zampolli’s place only has minor offenses: nine parking tickets since 2016

Zampolli did not respond to e-mails sent to one of his real estate companies listed at his townhouse address. Earlier, though, this reporter had a brief phone conversation with him, in which I asked if he had diplomatic immunity and would thus likely be exempt from getting parking tickets.

“I’m an American citizen! I get parking tickets!” Zampolli snapped in heavily accented English, claiming that I didn’t know enough about his credentials.

“You’ll embarrass yourself” with an article, he warned.

The Mayor’s Office of International Affairs confirmed that, as an American citizen, Zampolli is not entitled to immunities and exemptions. The ambassador declined my request to interview him at his townhouse, which he purchased in 2010 through his Gramercy Palace Corp., according to a document from the city’s Department of Buildings.

Zampolli filed an application with D.O.B. to renovate the property in 2011. He is currently attempting to rent out a furnished fifth floor one-bedroom apartment for $6,250 a month.

Chris Flores, a super for a row of brownstones opposite Zampolli’s property, said he has seen a portly man from Zampolli’s townhouse, someone he thought was the ambassador, “getting into fights” with motorists over the parking space on his block.

“You don’t see anything like that at the Mexican Consulate,” Flores said. “It’s crazy.”

Another neighbor said he was “confused” by Zampolli’s conduct, noting he once saw him at night, trying to gain other parking spaces near his townhouse by “holding up a [diplomat] sign like the kind you see all around the U.N.”

Dolly Lenz, a high-profile real estate broker on the Upper East Side, has represented many diplomat clients whose residences she described as “part of the fabric of New York.” She was once a colleague of Zampolli when they both worked for the Douglas Elliman real estate brokerage. Lenz remembers him “always off in a corner whispering” to people “and I had no idea what was going on.”

Lenz said Zampolli went to restaurant meetings at pricey Cipriani’s Downtown in Soho “literally every day. The Caribbean [market] seems like his reason to be a diplomat,” she speculated. “But if he’s not a complete moron, he has papered himself with lawyers.”

Lenz noted that the Elliman brokerage took Zampolli to court in 2015, suing him for allegedly hoarding the profits on his commissions and allegedly reneging on a deal to give the company a 30 percent cut.

Last week, on Sept. 23, Zampolli held a first-floor nighttime “invited event” at his townhouse. A sign inside an entry room stated that those “not invited will be removed by security.”