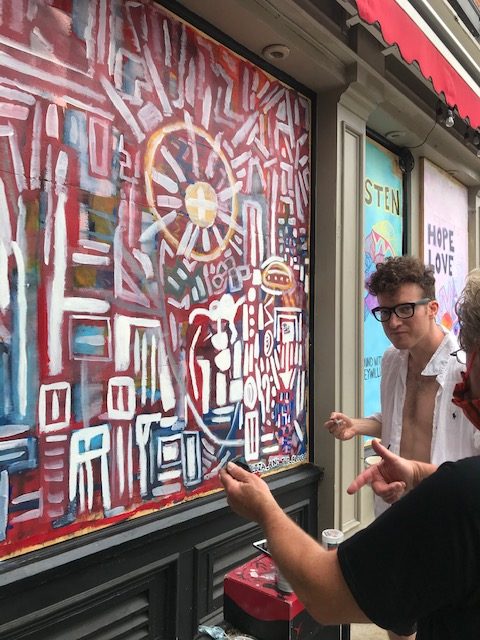 Robert Blodgett working on his plywood at Bar Primi on the Bowery. (Photo by Sono Kuwayama)

Crooks stole Bowery murals but not their spirit

Robert Blodgett painted two murals in the Bringing Bowery Back project that were recently stolen by a two-person crew in a U-Haul van. One piece, at 310 Bowery Bar, was of tragic teenage American civil-rights icon Emmett Till, which Blodgett painted the background for. The other piece, at Bar Primi, the artist did solo — although a homeless man contributed, too. Here Blodgett shares his feelings about the murals and the pain of their theft.

BY ROBERT BLODGETT | The Emmett Till piece was a collaboration that I did with Catt Caulley. Catt was the star and painted the beautiful portrait. I painted the words, but the poetry is hers, as well.

It was really heartbreaking to see this piece stolen. People in the neighborhood were really positive about this artwork. Dozens of people shared the work and tagged it on Instagram.

The other piece was something that I did by myself late one night on the Bowery after work. I had decided to go down there with friends, but everyone canceled and I couldn’t get anyone to join.

There was a camp of people living there on the street in front of where I made the mural, and one of the people stood watching me for an hour while I painted.

Someone came up to me all of a sudden and started screaming at me and seemed like they were going to attack me, but the person who was watching me paint defended me and I was able to keep working.

This person, who I later found out refers to himself as Moet the Realist, was instrumental in the completion of the work. Not just because he defended me from being attacked, but also because afterward I invited him to paint with me and he painted the sun, the UFO and the elephant/dinosaur shape, which I think make the piece what it is.

He was very proud to have painted the artwork with me and later wrote his name on it. He was also photographed by Smithsonian photographer Tom Pich after he told Tom that it was his work.

So, in a sense, this piece was quite literally stolen from the homeless. All of the other murals had been defaced and tagged but my piece, and I believe that is because the homeless people living there took pride in that piece being there. The fact that the painting was to be sold and the proceeds were to go to local homeless shelters also reflects that this piece was a theft from the homeless population living on the Bowery.

It is difficult for me to write down and describe my emotions and feelings about the theft. Half of me wants to let it go and be at peace with it, and the other half of me wants to have justice served on those who committed the theft and to get the painting back.

When I initially painted the paintings, I wasn’t expecting to have them recovered or for them to be anything special. But as the stories grew and the paintings uplifted the neighborhood and those who live in it, I really became proud and attached to the works.

I felt like this project was really a bright spot in the world, and in the neighborhood — and those who committed the theft sought to steal that brightness away from those who may need it most.

Fortunately, many paintings are still there, and Sono Kuwayama has been working hard to continue the project. The work that she did with Scooter LaForge yesterday next to where my mural was stolen really brought me joy because it said to me that we will still overcome and prevail, and people can steal but we will continue to brighten the neighborhood and keep going forward.

I am inspired to paint more after this and to improve the works that I have already done that have not (yet) been stolen.