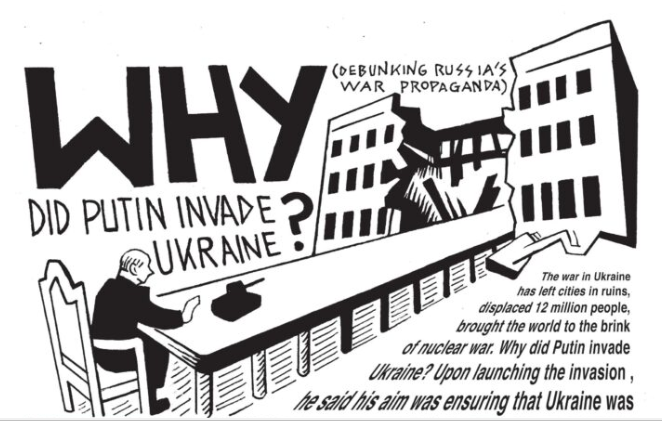 BY LINCOLN ANDERSON | For most Americans, Russia’s invasion of Ukraine is a clear-cut act of aggression that must be condemned. They naturally support Ukraine and also the West’s arming of the Eastern European nation to help it defend itself against its much-larger neighbor.

However, some on the far left, as well as on the far right, openly support Russia or just oppose America and European nations helping arm Ukraine. They give a variety of reasons for their position — among them that Putin is allegedly waging a war to “denazify” Ukraine or that aiding Ukraine will lead to the worst-case scenario, nuclear war.

Trying to cut through all the confusion, as they see it, two East Villagers — comic-book artist Seth Tobocman and political journalist Bill Weinberg — recently teamed up to produce an informative comic strip simply titled, “Why Did Russia Invade Ukraine? Debunking Russia’s War Propaganda.”

In black and white, it’s 14 pages long. Weinberg provided the text and Tobocman the art. Politically, they themselves are both on the far left.

Artist Tamara Wyndham, Tobocman’s partner, inked the comic strip’s images, which were penciled by Tobocman. She also contributed a piece under her comic art byline, Tamara Tornado, “Hands and Heart,” for the strip’s back cover.

“It was Seth’s idea,” Weinberg said. “Seth approached me — to his credit. I’ve been blogging about this every f—ing day practically and ranting about it on my weekly podcast, on Countervortex, for months now, since the invasion and even before.”

As for how the war is going, he said, “Ukraine’s been kicking a– and Russia’s in retreat. The fear is, though, Putin’s going to draw Belarus into it and it’ll be like a pincer.”

As for how things might end, Weinberg offered, “I’m with Yogi Berra: I don’t make predictions — especially about the future. I just know I’m on the side of Ukraine. I’m on the side of an anti-colonial struggle and self-determination. But certainly Ukraine is doing much better than was expected in March.”

However, in terms of who is winning the war of popular opinion, it’s less clear. Although the majority of Americans back Ukraine, Weinberg said the number of those who don’t is higher than most realize.

“My guess is 40 percent for the country as a whole,” he said, “given that Fox News is also basically in Putin’s pocket. On the left — and the right — the figure is much higher.

The pro-Russia position is hegemonic on the left,” he noted. “ANSWER, Code Pink, Noam Chomsky, The Nation magazine, Fairness & Accuracy in Reporting (FAIR), Democracy Now — they are all, blatantly or with some degree of slipperiness, toeing the Moscow line. Me and my friends are the dissidents.”

As for why that is, there are several reasons, he said.

“We call them ‘tankies,'” he explained of the Russia supporters. “They’re still rooting for Moscow today even though Putin is not a communist: He’s a f—ing fascist.”

The term “tankies” comes from when Soviet supporters stood by Moscow as its tanks rolled in to suppress the Hungary Revolution of 1956 and, later, the Prague Spring uprising of 1968.

Weinberg was outraged that antiwar groups — or the “pro-Putin tankies,” as he called them — rallied in Times Square on the weekend before Martin Luther King Day against what they called the “U.S.-NATO proxy war against Russia in Ukraine.”

“ANSWER and Code Pink are supporting f—ing Putin,” he fumed, “taking a prowar position. Martin Luther King would not be down with that.”

Let’s all do our part to resist escalation in Ukraine!https://t.co/bHuVv9X1nK

Meanwhile, Weinberg and his friends held a smaller rally in the rain in Union Square a few days later, at which they expressed support for imprisoned Russian antiwar protesters.

The anti-Ukraine side charges that the Maidan Revolution of 2014 there empowered neo-Nazis, drawing a line back to Stepan Bandera, a former far-right leader who today continues to be a divisive figure.

In addition, another reason given for opposing the Ukrainian resistance is Putin’s threats to use nuclear weapons.

“They’re saying Ukraine has to give up territory in the interest of world peace,” he said. “There’s been this very, very glib nuclear threat. I don’t even like to use the f—ing word. … The notion that Ukraine’s surrender will make the world a safer place is completely ahistorical, and is a betrayal of the Ukrainians living in the territory that would be ceded to Russia. What right do you have to bargain away another country’s territory?”

However, he slammed the pro-Putin crowd, in general, as “indoctrinated fools.” Part of it, he explained, stems from a distrust, on both the left and the right, of mainstream media.

“These people are so indoctrinated,” he said, “they will even look to RT — which is Russian state media, it’s a propaganda arm of the Kremlin —for alternatives to mainstream media.”

Weinberg noted that, while prominent leftist intellectual Noam Chomsky made a name for himself by calling out the coverage of leading mainstream media outlets like The New York Times, the media universe — and the variety of political opinion — has expanded exponentially since then.

“What Chomsky started doing in the ’60s was a worthwhile project — the whole notion of critiquing media slant,” he said. “But he has become part of the problem. He did not keep up with the times and how the media landscape changed with the Internet. It’s not just The New York Times and the three big networks anymore. That was the era of the Cold War and the U.S. supporting right-wing dictatorships. Now there are plenty of democratic revolutions that the United States has thrown its support behind, if for its own purposes. Portraying the Maidan Revolution as a U.S.-supported right-wing coup is a denial of reality. Chomsky is now basically saying Ukraine must capitulate to Russian aggression in the interests of global stability. Which amounts to support for Putin, however much he may deny it — so f— him.”

Some Ukraine foes argue that Russia’s invasion is justified because of Eastern European countries falling under the sway of NATO on Russia’s border, to which Weinberg retorted: “Why are we supposed to be concerned about Russia’s security and not Ukraine’s? This is the politics of might makes right — and is antithetical to everything that Martin Luther King stood for.

“There isn’t any doubt in my mind that if Martin Luther King was around today,” he declared, “he would be protesting Russia’s aggression — not protesting the U.S.’s aid to Ukraine.”

In December, The Museum of Reclaimed Urban Space, at 155 Avenue C, at E. 10th Street, put up an international art exhibit, “Stop the Invasion,” about the war, curated by Tobocman and Tamara Wyndham. The comic strip is part of the show.

While Weinberg’s focus is on dissecting the politics of the invasion and breaking down who is behind which side, Tobocman’s has been on the art show. But he also found time to illustrate the comic strip.

“Basically, I had been aware of Bill Weinberg as someone on the American left who had been one of the few people who had been consistently warning about Putin for the last 10 years,” he said. “Bill is an important voice.

“My main focus is to create a forum where Ukrainian and Russian artists can express their point of views,” he said of the larger art show concept. “Tamara and I got involved with Ukraine because artists in Russia wanted to do a show.”

Initially, though, in the backlash to the war, there was opposition to having any show of Russian artists in New York. Instead, one exhibit, called “Glory to Ukraine,” opened at Shalom Neuman’s IF Museum/Academy in Easton, Pennsylvania. Art for the show was curated from behind the Iron Curtain by Tobocman and Natasha Konyukov, a Moscow artist, and from America by Neuman. Neuman,who formerly ran the Fusion Arts Gallery on the Lower East Side, also toured with the exhibit through Prague, Paris, Warsaw, Verona, Berlin, London and Tel Aviv.

Meanwhile, a separate show, “Perevort” (“flip,” meaning “revolution,” in Russian), was held at two secret locations in Russia, in St. Petersburg and Moscow, plus a city in Armenia.

These were then followed by a third exhibit — at last, after a year, in New York City — “Stop the Invasion,” still currently up at MoRUS. In addition to Ukrainian and Russian artists, there are works by Palestinian and Israeli artists in the Avenue C show.

As for the pro-Russia lefties, Tobocman explained, “They see the United States as the big problem in the world, so they support anything the United States is against. There’s a long history between people on the left and Russia — so there’s that, too.”

On Fri., Jan. 27, from 7 p.m. to 10 p.m., Weinberg and Tobocman will be at MoRUS to give a live reading and slide-show presentation of the comic strip, as part of a night of multimedia presentations and performances for the “Stop the Invasion” show. Katie Halfin, a Ukrainian performance artist, will be there, as well. To register for the event, click here.

For a digital version of the “Why Did Russia Invade Ukraine?” comic strip, click here.