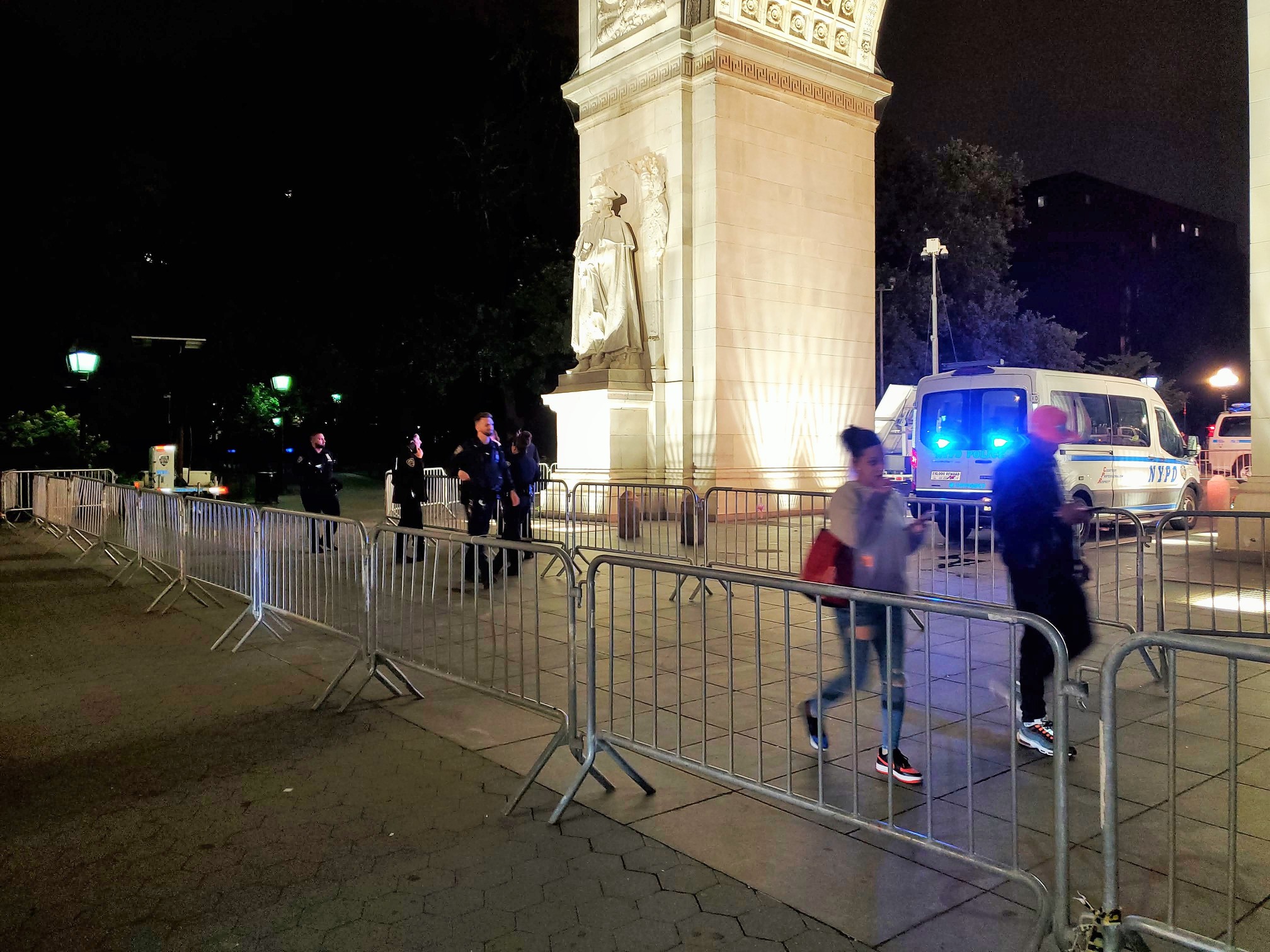 BY LINCOLN ANDERSON | All quiet on the Washington Square front — really quiet.

After some hesitation earlier this week on Monday in enforcing the park’s curfew, the police have been steadily closing the park at midnight, reportedly every night.

Although the Sixth Precinct had issued fliers Monday reminding people that the park’s closing time is 12 a.m., the space remained open that night, albeit with a heavy police presence keeping an eye on things. Possibly a factor, a day earlier, police and some Pride revelers had had a shoving match over a movable metal police fence by the arch, during which police used pepper spray.

But since then, the cops have been closing the park at 12 a.m., reportedly every night.

Washington Square Park was calm and nearly empty by the time the curfew rolled around Saturday night on Fourth of July weekend. The final stragglers were trickling out through the gates. Once again, there was a large police presence inside the park before it closed.

A couple of times after the park was shut, the peace was briefly broken by a car with an insanely loud sound system slowly cruising through the nearby streets. But, generally speaking, if there were crickets around, you would have heard them chirping.

There was one arrest in the park earlier in the evening. According to police, shortly before 9 p.m., officers spotted a 24-year-old man who was wanted in connection with an open investigation from June 5. In that earlier incident, police had been trying to arrest the man in front of 208 Thompson St. for unlawful assembly, but he resisted arrest and fled.

Busted in the park this Saturday, he was charged with obstructing governmental administration and resisting arrest. According to a witness who is close to the Sixth Precinct, during the arrest, the man scuffled with Captain Stephen Spataro, the precinct’s commanding officer.

“The perp was physical,” the source said. “It took about 12 guys to get the guy cuffed — he was a big guy — and walked to the police car to get him in the back seat.”

Later, early Sunday morning, young revelers passing by the gated park were visibly annoyed that it was closed and that there was no rave going on. Their feelings could be overhead in snippets of conversation as they passed by on the sidewalk in front of the arch.

One man walking with a group of friends could be heard scoffing indignantly, “A fully public park — so now the police are going to ‘close it,'” accenting “close it” with sarcastic air finger quotes.

Another guy talking on his headset to someone while strolling along Washington Square North could be heard possibly explaining what he felt was the reason for the park’s closure: “Because people are paying a lot of rent for their apartments… .”

A man passing by with two women described the past late-night parties: “We came here, it was like perpetual…crowds of people… .”

“Why they close this s—?” spat a young guy ambling by with a loudly grumbling group. A woman bringing up their rear flashed her middle finger back toward the arch, where a detail of police were posted.

Devin Pierce, 21, a photographer, and two friends were disappointed to find the entrance on the park’s west side at Washington Place closed. They have been regulars at the park’s nocturnal party scene and have really been digging it.

At another point, though, he added, “To play devil’s advocate — the music be blastin’, yo. Maybe being in that apartment, you would get no sleep.”

They offered The Village Sun a beer.

David Terry, who said he has been homeless for the past six years, came drifting by. He weighed in on the issue.

“I think that it’s a good thing,” he said of the curfew. “There has to be some sort of order.”

However, he said, “I think they should have more services here,” adding that he has “full-blown AIDS.”

“I come through here because I love art,” he said of Washington Square.

Before a police crackdown on the park’s drug scene about a month ago, neighbors had been loudly complaining about drugs and prostitution in the square. A W. 14th St. resident out for a walk with a friend early Sunday morning said he had previously witnessed “guys with their penises out” in the park getting oral sex.

Yet, the longtime Villager, who went to New York University, said he supports keeping the park open all hours.

“I don’t agree with the curfew,” he said. “People need a place to be active.”

At the same time, he said there would need to be police in the park around the clock then, noting, “You have to have order.”

Another passerby, going by with his girlfriend, nodded toward the park and said, “The whole party scene… . They used to have dirt bikes and ATV’s [in there]… .”

An officer from Chelsea’s 10th Precinct rolled up in his car outside the Washington Place entrance. His orders were simple.

“They just told us no one’s allowed in the park,” he said. “Shouldn’t be a problem. A lot of people are probably out of town [for the holiday weekend].”

At least two officers, and sometimes up to five or six, guarded each entrance around the park, standing in front of movable metal gates.

Two friends from Vegas — Republicans who hope to open up restaurants here — came by the closed Washington Place gate. One has been here two years, the other a week.

They had been knocking back Lite beers, more than a few. They were eager to check out the wild park party scene they had heard so much about.

“I guess we’re a few weeks late,” one of them cracked.

Asked where they lived, he said he owns an apartment at One Manhattan Square, the swanky new 72-story skyscraper next to the Manhattan Bridge. Dad helped buy it. He flashed some photos on his phone of the apartment’s vaunted views.

They offered The Village Sun a beer.