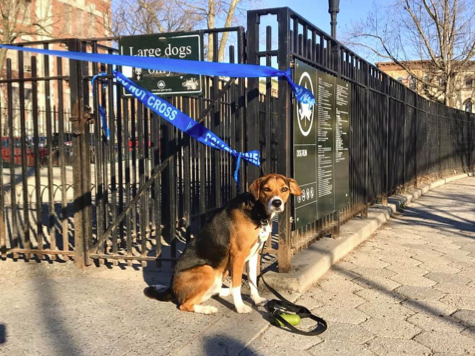 The dog days (and nights) of the COVID-19 pandemic

BY LYNN PACIFICO | Mayor de Blasio closed all dog runs on Mon., April 6, and dog owners are scrambling to figure out how to exercise their dogs.

This is no small matter since, for many people, their dog is their fur baby. This is obvious in the huge amount of time and money spent on dogs, the many commercials that feature dogs, and strollers carrying dogs instead of babies.

Dog trainer and behaviorist Sharon Mear, of Training Cats and Dogs, said the situation could create “nightmares” for dogs and their owners.

“The closure of dog runs, on top of everything else, is really going to create future nightmares, if people don’t find ways to mentally and physically stimulate their pups,” she said.

For those staying in with their smaller dogs, she suggested using imagination to create agility play. For instance “up” and “off” the sofa. And hide their favorite toy and say, “Go get it!”

She added that now is the time to really practice training.

“If you have ever complained that you don’t have time — now you have enough time!” she said.

Keep obedience training in short spurts, so you leave them wanting more. But what does a dog owner, who has a large, young or just plain energetic dog, like my 65-pound Pax do?

One dog owner wrote to me: “I’m just worried about my high-energy dog and my studio apartment.”

I can relate because I got Pax just before Hurricane Sandy, after which the Leroy St. Dog Park in Hudson River Park was closed at night. She is a service dog and does not go into a run when other dogs are there. So I attempted to tire her out by using park features, like benches and bike racks, to do agility. Unfortunately, the park’s hard surfaces were not good for my knees and I tore my meniscus in two places.

It was a useless sacrifice anyway since no matter how hard I tried, she didn’t get tired. I, on the other hand, was exhausted. Now that she is older, this is not as much an issue. But young dogs need to get out their energy or they are at risk for developing behavior problems. A tired dog is a good dog.

“My dog desperately needs an off-leash running time,” the dog owner continued. “None of us can run fast enough to keep up with sighthound legs on-leash!”

The closures of the dog parks has had the opposite effect of keeping people apart. Now, instead of the dogs getting together to play while their owners watch from the perimeter benches or toss a ball, the owners are meeting in groups on the park paths, so their dogs can play together. Leashes, with wrestling pups on the other end, force owners to be closer together then 6 feet.

Garrett Rosso, the head of the Tompkins Square Dog Run and an officer of the New York Council of Dog Owner Groups (NYCdog), had offered a warning in advance.

“Guarantee, as soon as the dog parks are closed, folks will start off-leashing everywhere,” he predicted.

And he was correct.

I watched dogs having a great time running off-leash on the lawns in Union Square Park. I am also seeing this more often in the Hudson River Park. This is happening in all Downtown parks. Uptown, where there are off-leash hours, this is not an issue. Below 57th St., we do not have off-leash hours, which creates a big problem for dog owners ordinarily, but especially now.

As a word of caution, if you let your dog off-leash, which is a finable offense unless at designated areas — Uptown — and times, your dog must have excellent recall. If it doesn’t come when called, your dog is at risk of getting hit by cars, engaging with aggressive dogs and getting lost. A 30-foot leash is good for teaching recall and obedience. But be careful not to use it around people since they can be tripped by a crazy dog doing zoomies. My own dog has done this to me twice!

Last night, at midnight, I took my pit-bull mix to an empty corner lot. She is quiet and obedient but, to ensure her safety, I used a 30-foot leash. I cannot recommend this since it exceeds the city’s 6-foot leash law and is also finable. We played fetch for 20 minutes, considered the minimum amount of daily exercise recommended for dogs. Then I put her 6-foot leash back on and we went for a walk in the dark empty streets.

If I had a smaller dog, I would not feel safe doing this. Even so, it makes me uncomfortable at times. And I do not want to put Pax in the position of having to defend us. I love her too much to risk her safety. We keep the late-night walks short, but what am I to do?

Amy Willard is an NYCdog officer and the group’s Facebook moderator.

“Yep…plus it just ups the volume of people and dogs on park paths, too,” she said of closing the dog runs. “I felt safer being able to spread out in the dog run than walking on the paths with joggers [without face masks] going by huffing and puffing every minute. We had to go for an extended walk around the neighborhood today. I felt less safe passing people on 4-foot-wide sidewalks.”

We are all looking forward to the dog runs reopening but in the meantime here are some things to consider.

Amy, also one of the founders of the Maria Hernandez Dog Run Pac, put together an emergency form, which is necessary anyway, but especially during a pandemic. By law, if something happens to you or your apartment, the city will confiscate your dog and bring it to the pound. To avoid this, it is essential that you keep this contact information posted on your fridge. It is also good to keep it in your go bag and your pet’s go bag, too. (I also keep it in my wallet.)

The emergency form includes owner contact info, contact info for people who will take of your dog in case of emergency, a photo of your pet with description, vet info, license number, last rabies date, microchip number, behavior issues, food allergies and where you keep your pet’s official papers, like vaccine records. I also include a copy of Pax’s rabies shot, license and training certifications with the emergency form.

We play a game of hide-and-seek while using it to reinforce her obedience skills. I use various combinations of hand and voice signals to put her in a down or sit stay. Then, I hide. Once hidden, I call her. She gets a small treat when she finds me. She loves this game and I have come up with some good hiding places in my place to keep it fresh — in the tub behind the curtain, behind the drapes or half-open doors, in closets and on the guest-room bed. It’s kinda fun for me too.

One resourceful dog owner suggested: “I’ve been using slow-feeder bowls and snuffle mats. There’s a FB group called Canine Enrichment that has lots of good ideas to keep pups entertained during this quarantine.”

If you have a car, the national (not city) parks system allows dogs on the beaches part of the year.

We know that dogs DO NOT get the virus, but they are family and responsible dog guardians will do what they can to keep their fur babies happy and healthy. Let’s all stay safe and calm and make the most of this time and look forward to the runs reopening, hopefully, soon. Life really is better with a dog.