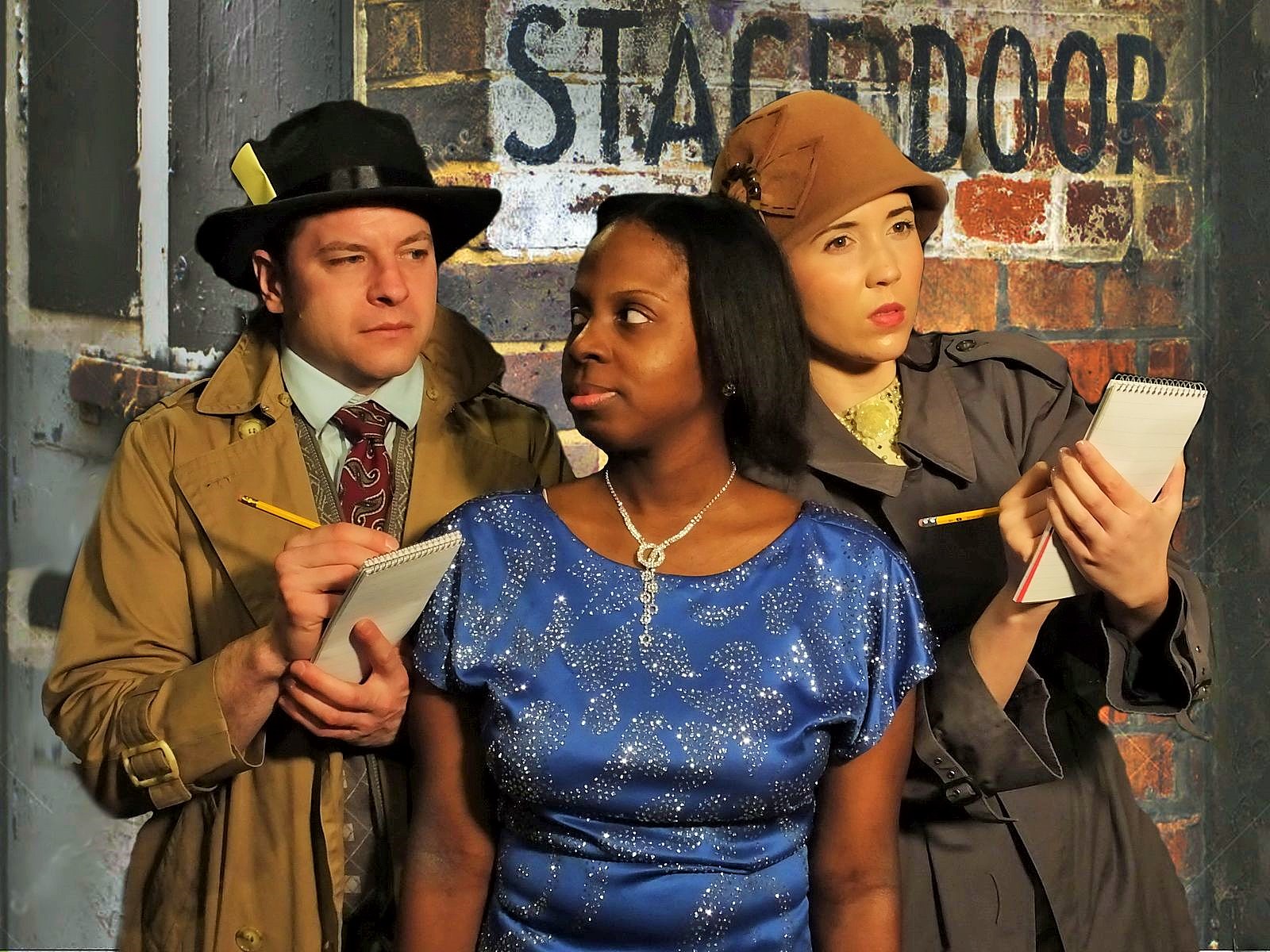 Actors Steve Barkman, Kendra Augustin and Sarah Teed wearing costumes by Everett Clark in "The Three-Mile Limit," a past production at Theater for the New City. (Photo by Everett Clark)

The costume’s the thing: Everett Clark talks about 40 years of designing thespian threads

BY THE VILLAGE SUN STAFF | Everett Clark stood in one of Theater for the New City’s four theater spaces recently during a break between costume fittings for “The Christmas Express,” a new musical with characters that are a blend of fantasy and tradition. When asked to describe his view of costume design, he simply said he’s a storyteller.

“You’re supposed to interpret the script through costumes,” said Clark, who has been designing costumes for decades, including many shows at TNC. “By a visual effect of looking at the costumes, the audience understands where they are in the story. I try to stay with the vision of the director, so we’re in sync as to what’s going on on stage at any given moment.”

After designing costumes for “They Came to the Castle,” a show written and directed by Barbara Kahn set in the 1850s, at Theater for the New City in November, Clark designed costumes for “The Christmas Express,” a new holiday musical at the East Village theater, where much of his work has been seen.

“Everett Clark is the most innovative costume designer I have ever had the pleasure of working,” said Joe John Battista, artistic director for the 13th Street Repertory Company.

In addition to three shows at the 13th St. Repertory, Clark has done more than a dozen at Theater for the New City, led by the theater’s artistic director, Crystal Field. He did costumes for about half a dozen shows written by Barbara Kahn, two by Claude Solnik, two TNC street theater productions, several for the theater’s festivals and one directed by Mary Tierney.

“Shows convey a story or a moral lesson in life,” Clark said of one common thread. “Each is unique because they tell it from a different perspective, of the writer and the director. Sometimes, the writer is the director.”

Although sewing is part of this aspect of show business, Clark said the process starts when he reads the script, typically four times. He reads it once, then highlights to indicate where characters enter a scene and whether they would need a new costume for that scene.

“The third time I go through it, I highlight props, anything they’re handling, so I can go over with the prop person what I’ll handle or they’ll handle,” he said. “The fourth time I read the script, I make sure I’ve hit on everything and break it down from there.”

Clark has done numerous plays at Theater for the New City, which focuses on new work. He typically helps bring new shows to life, helping craft a look and fleshing out productions with costumes.

Clark also designed costumes for “Dress of Fire,” with Austin Pendleton, at the 13th Street Repertory, as well as “City Girls and Desperadoes,” at TNC, with Pendleton. He often works with people more than once, bringing a light touch, talent and tailoring skills to the table. Clark did numerous shows for Kid City Theater, led by Wendy Tonken, as well as six “historical” play shows by Barbara Kahn from 2015 to 2021.

“He researched the specific time period for each play and used his research to support the costumes he designed,” said Kahn.

To design costumes for “They Came to the Castle,” by Kahn, set in the early 1850s, he Googled “Castle Clinton” and “Castle Garden,” two names for the same circular building at the Battery in Lower Manhattan, where the main action is set.

“From there, I looked at what immigrants were wearing when they got off the boat,” he said. “I went to the Statue of Liberty and got information as to what immigrants wore when they came from Europe. And I did a Google search of ‘immigrant tenement buildings.’”

While research helps with shows set in a specific, historical time period, he also designed costumes for the more whimsical “The Christmas Express,” which involves Santa, robots, cowboys and a wide range of characters. “It’s technically fantasy, so it’s not quite set in reality. I could draw from different time periods,” he said. “Santa Claus was traditional. We did a twist on his wife’s costume. Since it’s a fantasy, the other characters don’t have to be traditional.”

Clark worked with the director, Matthew Lightsey, and writer, Claude Solnik, to create a style that combines traditional and modern looks for a holiday show mixing tradition and innovation. Whether tailoring makes the woman or man, it can help clothe and convey the character.

“I try to keep the color palettes as neutral as possible,” Clark said. “That way it keeps the audience in the story. Sometimes if the costumes are too outrageous, they take people out of the story.”

He makes many costumes from scratch, drawing on 45 years of cutting and draping. For plays set in more modern times, he shops to find costumes that fit the characters, adding to them to fit the character to “evoke the look.”

“With “The Christmas Express,” the most creative costume was a robot,” he said of that costume crafted out of cardboard, circuit boards and other times. “I’ve never had to do a costume for a robot.”

Over the years in show business and sew business, so to speak, Clark has had some unusual costume requests, such as a YouTuber who wanted a fortune cookie costume, leading to challenges, such as getting the right shape and fit. He also did a flesh-tone costume for a fashion show called “Bare as You Dare,” giving the effect of tattoos on the body.

“I got fabric, dyed it and used stencils and screen printing,” he said. “I also did an art-to-wear event at the State Office Building in Harlem where I printed fabrics using blocks to make my own fabrics.”

Clark was born in Costa Rica and came to New York when he was 12 with his father, a tailor. His mother, grandmother and aunt were all seamstresses. His aunt, he said, was a big influence.

He did costumes for a church Christmas pageant and went on to design and make costume jewelry at The Door, the Broome Street youth center, as well as costumes for church plays.

The first show for which he designed and made costumes was “Man of La Mancha,” in spring 1977 at Farley Middle School,  during about one year spent in Framingham, Massachusetts. Clark played Sancho Panza, Don Quixote’s sidekick, and helped craft costumes for the show.

At Talent Unlimited High School in the Julia Richman High School complex, at 68th St. and Third Avenue, he did costumes for himself and some others.

He went to the Fashion Institute of Technology as a jewelry design major, working for Elan Elan, a costume jewelry company, and then returned to F.I.T. to learn tailoring and costume design. He helped with costumes for a Busta Rhymes music video and became the point person for “Spider-Man Live!” supervising costumes.

“It was at Radio City Musical Hall before the Spider-Man show that came to Broadway,” he said. “I worked on the costume for the wrestler, went to the fittings and came back to the studio and told everybody what they needed to correct or build.”

He still has some costumes at home from more than four decades of design. Some, he said, have been damaged by water, but a lot remain, although he no longer has a lot of the work he did. He designed costumes for the Fashion Institute of Harlem, which donated its collection to the Smithsonian Institute in Washington, D.C.

He said costume design is about evoking character, as well as creating a look. And it’s important for actors and audience to be aware of that aspect of the craft.

“Part of the effect of the costume is to make a character look a certain way. Some people just want to look good,” he said. “The character needs to look like the character.”

In addition to original productions, Clark has worked on huge shows that attract tourists from around the world. He worked with Jennifer Love Studios for the “Christmas Spectacular” for Radio City Music Hall on the tailcoats for the Rockettes’ opening scene.

“Each experience brings a different level of knowing,” he said. “I never had to do tailcoats. I applied tailoring skills I learned at F.I.T. to translate information from tailoring into making tailcoats.”

Christmas and the holidays in general, as well as musicals, can lead to elaborate costumes, including some shows that are staples for the season, as well as new ones. He did costumes for “The Nutcracker” for a production in Pennsylvania, as well as some other productions of the classic fairy ballet.

“This time of year, you get a lot of requests for those holiday shows,” he said. “”The Christmas Express” is a fantasy show. There’s no precedent or template to what the costumes look like. I get to play with what the look of the costumes get to be, a cross between modern and traditional.”

For more information about Theater for the New City, click here.