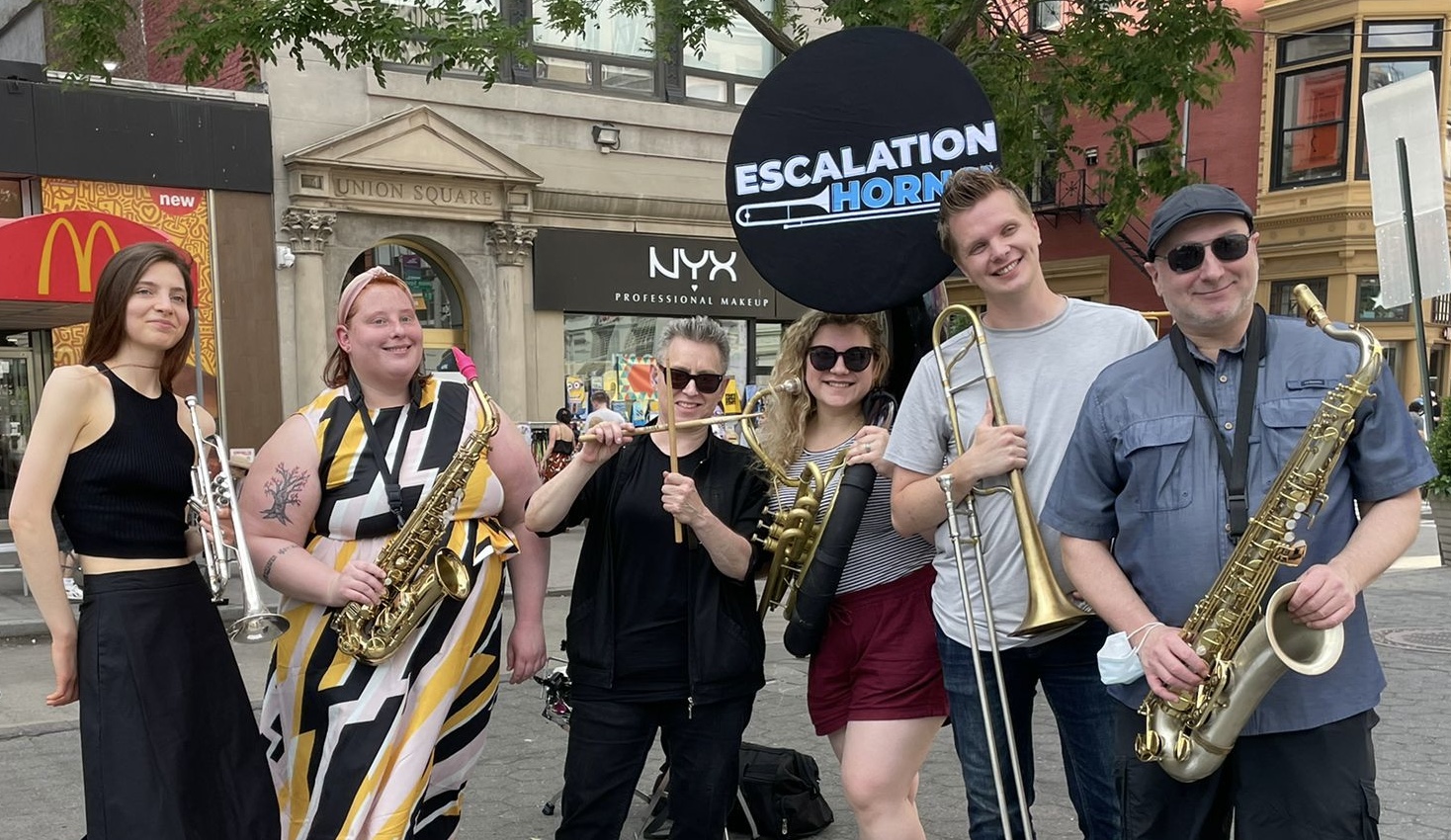 The brass lining: Escalation Horns take it to the next level during pandemic

BY ELLA HENN | As the Escalation Horns roved the West Village, stopping at each restaurant or bar to perform a few tunes, a woman approached. She had come to share her thoughts, bluntly, about the six-piece brass band: “I hate you.”

“We do get, every once in a while, people having a bad day, and just really not having it,” said Matthew Jermiason, the band’s trombonist. “We’ve had people come up to us and say, ‘We straight-up hate you guys,’ and that’s, like, O.K., cool. Awesome, love that!”

Busking, or playing music in public spaces for donations, became a necessity during the pandemic for bands and musicians looking to play safely for an audience. And brass bands like the Escalation Horns have an important advantage: They don’t need amps.

In New York City, in order to perform while using any sort of amplification device, you need a permit. So bands composed of only brass instruments, with their mobility, and easy ability to produce a powerful sound acoustically, are well suited for roaming the city streets.

Although the Escalation Horns’ capacity for big sound is a huge advantage when it comes to permits, they also have the potential to disturb local residents’ peace and quiet, especially in predominantly residential neighborhoods like Greenwich Village.

Despite the occasional negative reaction, the band’s overall reception while busking has been overwhelmingly positive, according to its members. Jermiason and the band’s saxophone player, Craig McGorry, describe whole tables of people getting up to dance, a restaurant owner Venmoing $100, people returning to listen for a second, even third time.

“I just remember the looks on people’s faces, just to see live music again,” McGorry said. “It’s kind of a visceral experience that was missing for a lot of people during the pandemic.”

And even the more negative, or strange, experiences have helped the band grow together and build fortitude as musicians. Busking is unpredictable. Or, as the band members put it, sometimes it’s “over the moon exciting, and other times it’s just crickets.”

McGorry and Jermiason founded the Escalation Horns in 2019. They had joined a large community band, the LTrain Brass Band, which introduced the pair not only to each other but to the sweet tunes of New Orleans.

Jermiason had recently moved to the city from the Midwest, where he had received his master’s in trombone performance. All throughout his life, he had focused solely on classical music.

“I grew up listening to classical music, orchestra music,” he said. “I didn’t listen to any pop music.”

When he moved to New York City, the world opened up to him. He realized: “Oh wow, there’s all these other types of music that are available to me all of a sudden.”

McGorry, on the other hand, has lived in New York for the past 32 years, been involved in the music scene for almost as long, and taught band to middle and high schoolers for 17 years. McGorry never played music as a kid, but describes himself as a “serious listener,” obsessing over Pink Floyd, U2 and Peter Gabriel. When he was 17, however, after deciding he wanted to play music, he managed to be admitted into a music school. Yet, he admitted: “I don’t know how because I didn’t play an instrument.”

McGorry picked up piano, practicing two to four hours a day, eventually learning to play the saxophone, as well.

“To be quite honest with you,” he said, “there was a little bit of an ego thing. I wanted to have an instrument I could carry around, so people knew I was a musician.” But he quickly fell in love with the woodwind instrument, noting, “The saxophone kinda gave me a voice.”

After college, and a brief stint in financial advising, McGorry began really studying jazz, which eventually led him to the brass band scene. LTrain was a “very nurturing environment,” he recalled. But he described wanting something more nimble, a smaller brass band that could “control the sound more.”

And then they got a break, a big one.

“We got this really insane gig, through the LTrain,” he said, “playing at the Barclays Center at a Lil’ Kim concert.”

Most of the LTrain band members were in New Orleans at the time, so McGorry, Jermiason and a few other members were left to “fill in the gaps and do this gig.”

“That was our big moment of being on the big stage,” McGorry recalled. “For like three minutes.”

“And that was one of the first iterations of the band,” Jermiason added. “We were all in the right place at the right time.”

All they needed was a name.

Enter Steve Moscowitz, another founding member of the group, who, as McGorry recalled, “would not get angry, exactly, but he would make comments. He just had no filter. And his wife was always like, ‘Steve! Stop escalating!’

“I’m always terrible at coming up with names of bands,” he continued. “So I was, like: There it is, there’s the name! I’ve just gotta grab it.”

Initially the Escalation Horns endured quite a few personnel changes. Another band even poached their tuba player. But Jermiason and McGorry remained consistently involved. McGorry admitted that he felt discouraged during the band’s first few months; so many brass bands were forming around the same time and musicians “were getting pulled in every direction.” It felt impossible to create a dependable group.

Then, suddenly, the pandemic hit, and live music was relegated to the city’s streets. The band immediately stopped performing altogether, and both McGorry and his wife caught COVID-19 in March, eventually recovering.

“That was a confusing time. We were just trying to figure out what the heck was going on,” Jermiason said.

Aside from some unsuccessful attempts at online recording, the band became almost completely inactive.

“We basically just took that time as a hiatus,” he added.

The Escalation Horns rediscovered busking in the fall of 2020, after an eight-month break, when they joined a Get Out the Vote campaign to play live music outside of polling locations.

“That was like, ‘Oh, my God, we need to play,’ and busking was a way we could actually play,” McGorry recalled. “It was a lifesaver.”

The group began busking frequently once the weather improved this spring and have played outside almost 25 times since then, in Union Square, Madison Square Park and Washington Square Park, among others.

McGorry and Jermiason describe every busk as an opportunity to become tighter as a group. They’ve memorized more music, like a cover of “Juice” by Lizzo, learned to listen to each other, and built trust among the band. Jermiason noted how busking allows the Escalation Horns to get their tunes “out in front of people as often as possible” and he believes the band has grown a lot faster because of it.

Most importantly, they’ve finally found their core group of people: a mix of full-time freelance musicians and New Yorkers with other jobs who play music in their spare time. All of their members make time for the band, despite their demanding schedules. McGorry points to Erica, the band’s alto saxophonist, who carefully balances her job as a full-time pharmacist with her love for music. And to Emma, the trumpet player, who manages to fit in rehearsal with her unpredictable hours as a freelance video editor.

“Even if it’s not their full-time thing, you know, they’re dedicated,” he said.

And that dedication has paid off. In early August the band performed their first live, indoor show in more than 18 months. Thanks to the frequent practice from busking and rehearsals, the Escalation Horns were able to have a “really fun and successful live show, and come away with a ton of takeaways.” They viewed the gig as an opportunity to receive feedback from the audience, to find out: What worked? What didn’t? And where can we go from here?

And now, with the city in limbo, midway through reopening and faced with the ominous Delta variant, McGorry and Jermiason were asked what they envision for the future of the band.

Jermiason chimed in, laughing, “We have pretty big visions, but we also need to be realistic about things, too. This year is gonna be a lot of busking — but also how can we get involved with more than just busking? What’s the next thing for us as a professional group?”