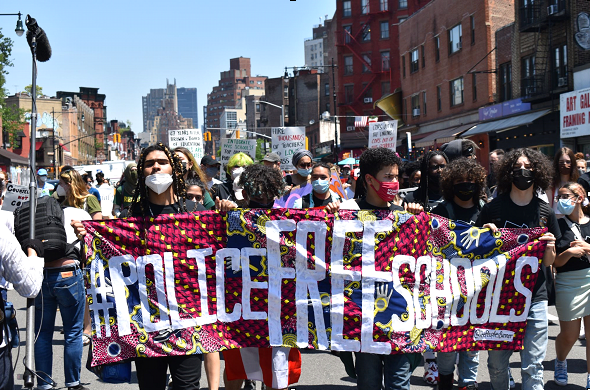 BY LACHLAN HYATT | Students, teachers and activists demanded the removal of school safety officers and increased spending on social programs for schools at a rally in Washington Square Park and march to City Hall on Saturday morning.

“With the [budget] deadline of July 1, City Hall will make a decision whether to keep police in schools or not,” said Keneisha Buckley, 16, a teen youth leader at the Urban Youth Collaborative and one of the rally’s organizers. “We must make police-free schools the standard and a reality for all schools in New York.”

Coming amid increased calls for defunding the police, the rally stressed the need for restorative justice practices to combat systemic racism and police discrimination in the city’s school system. Last summer, Mayor de Blasio announced a two-year plan to transition oversight of school security agents from the New York Police Department to the Department of Education as part of an effort to cut N.Y.P.D. funding.

Activists at the rally, however, believe this transition does little to address root problems of youth criminalization or race-based over-policing and is simply giving the same system a new name.

“It doesn’t do anything, like they’re still there,” said Stephanie Pacheco, 17, a Bronx student and member of the Teens Take Charge steering committee, regarding the mayor’s plan. “They’re still terrorizing our students. They’re still taking up too much money and it’s not enough.”

Starting at Washington Square Park, the group of more than 100 marched through the West Village, shutting down traffic along the way on Seventh Ave., to City-As-School, at 16 Clarkson St. They point to the Soho school as a model for education reforms and restorative justice in education.

From there, they marched to City Hall, where they called for the new city budget “to include at least $118.5 million for restorative justice in schools, $177 million to expand access to social and emotional support, and full divestment from school policing,” according to a press release issued by Urban Youth Collaborative.

Outside City Hall, the demonstrators were delighted by a surprise appearance of Congressmember Alexandria Ocasio-Cortez, who was already at City Hall to endorse mayoral candidate Maya Wiley. Climbing onto the iron fence encircling City Hall Park, AOC talked to the crowd and said she supported their aims.

“We’re with the kids,” she said. “Because one of the things that is damaging is that we have a system of policing in schools that kids get used to at a very young age. You think that being policed your whole life is normal — and it’s not. What should be normal is that when you need help, if you’re acting out and you’re a kid that needs support, that you get that support. We don’t answer these injustices with more injustice. That’s like trying to solve climate change by hiring more firefighters. The damage is already done — that’s the problem.”