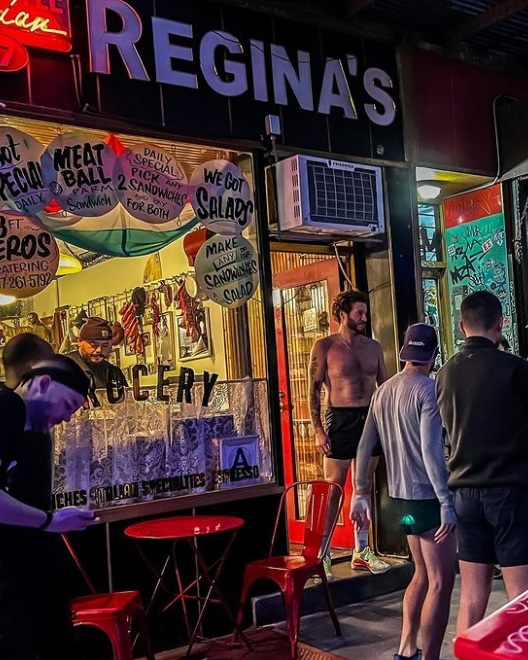 The Orchard Street Runners assembled for an outing in May. (Photo by Joseph DiNoto)

BY AVERY HENDRICK | Standing shirtless in the doorway of Regina’s Grocery, a runner looks over the crowd of Nike-garbed athletes gathering in the belly of the Lower East Side on Orchard Street. Above, the sun sets behind the buildings, casting the group in blue shadows and a cold breeze.

“What? It’s not that cold!” the bare-chested man says as he steps into the night with the Orchard Street Runners, an 11-year-old, unsanctioned Downtown racing club. Around him, the group stretches as they wait for their weekly Tuesday night run to begin.

Among them are a teacher, a New York University graduate student, a documentary filmmaker and a patent attorney. Amid the crowd stands Corey Weiss, 26, dressed in monochrome black, like many of the runners — it’s their unofficial uniform.

“The racing we do here — you don’t see that in everyday life,” said Weiss, a former Division 1 athlete-turned-urban running-race director, about the group. The Orchard Street Runners don’t meet for organized track workouts like most running clubs. Instead, they cross busy intersections, hop fences and cut corners in search of the best times. They run year-round in sun, rain, snow and darkness.

Following several starts and stops through waves of COVID and mask mandates, Orchard Street Runners, or OSR, announced on April 22 the return of the Midnight Half, a half marathon raced at midnight through the streets of New York, on June 18. The race returned for the first time since 2019, with new addition Corey Weiss and longtime leader Joe DiNoto as race directors and two years of unusual pandemic-time competition tucked under their belts as fuel for the event.

Started in 2011 by laid-off architect DiNoto, Orchard Street Runners hosts small, unique, late-night races through the streets and on the bridges of New York City. All of the races are “unsanctioned” and run without road closures, official courses, timing or a bike escort. Instead, the contests feature checkpoints as course markers. How the runners reach these checkpoints, however, is entirely up to them.

“We’re playing with the sport of running like a game,” Weiss said.

OSR’s competitions thrive on creativity and originality: They often rethink the sport of running by eliminating typical restrictions, like designated courses.

Weiss first heard about OSR in 2018 after graduating from Elon University in North Carolina, where she spent four years racing for the school’s Division 1 track and field program. A lifelong runner, she felt burnt out after years of collegiate racing and returned to her hometown of New York City. However, she decided to try the sport again after her father heard about Orchard Streets Runners and recommended the group.

On a whim, Weiss signed up for the Red Hook Race, a roughly 9-mile route from the Lower East Side to Brooklyn. From the first moment, she was obsessed.

“It was like a breath of fresh air. It reset my love for the sport,” she said. “I remember we were once running over the Williamsburg Bridge and fireworks went off at the top and I knew this was what I was supposed to be doing.”

After Red Hook, Weiss befriended founder DiNoto while racing in the Bread Route Race, a 7-mile course based on bread-delivery routes with a 2 a.m. start time, as well as OSR10K, one of the group’s most elite events.

After Weiss quit her job in athletic retail, DiNoto invited her to help host OSR1, a 1-mile race run in Times Square at midnight in January 2020.

“When it went off without a hitch, I thought, ‘Why not keep going?'” she said.

Unfortunately, the COVID-19 pandemic prevented Weiss from immediately leading OSR races since the group was forced to pause. However, OSR was small enough to quickly return to outdoor practices. As for competition, they created their form of pandemic-time virtual racing: the OSR Global Challenge, which asked participants to submit their running times at various distances with no restrictions.

“That was fun. We wanted to see what people would do with it,” Weiss recalled.

The results were spectacular, with one athlete matching the men’s world record mile time of 3:43 — on a disqualified downhill course. The challenge stretched across the globe, with around 150 runners submitting times from Chicago to Amsterdam from 1 mile to 100.

To Weiss, the virtual OSR Global Challenge, operated mostly on the running app Strava, was the best racing option during the pandemic.

While that format is no longer needed now that in-person events are back, the challenge perfectly represented the unrestricted spirit of Orchard Street Runners.

“We put our lives and souls into this, to create a place to run with more autonomy and freedom,” explained Weiss, whose experience in the ultra-structured world of collegiate cross country left her drained. “A place to just let you say, ‘I know my body’s in pain, but I’m gonna go.'”

She compared the experience of running to life in New York City. All of Orchard Street Runners’ events are New York-centric and draw inspiration from the city, like the OSR30, a 30-mile ultramarathon circling Manhattan Island.

“New York City will eat you up and spit you out,” Weiss said. “But, eventually, it’ll reward you for sticking around.”

If Orchard Street Runners is one thing, it’s resilient. The Midnight Half on June 18 featured David Trimble of Trimble Racing and a Nike sponsorship.

On Aug. 11, Weiss’s OSRC1, a timed race involving collecting points and specific checkpoints, created chaos through the streets of the city. This group knows no limits — not time, traffic or weather.

One of the group’s members, Steph, described an April Tuesday night run in the pouring rain that drew an unexpectedly large crowd.

Tonight, the weather is crisp and clear with a chilly breeze. The runners mill about in the soft, yellow light of Regina’s Grocery as DiNoto stands on a chair to announce today’s route.

Dressed in all black, despite their lack of visibility, with hats low on their foreheads, they don’t look like the average group of hobby joggers. This running group doesn’t wait for anyone and doesn’t
hold anyone back.

In a flurry of neon shoes, the dozen athletes are around the corner of Orchard and Canal and lost to the city.