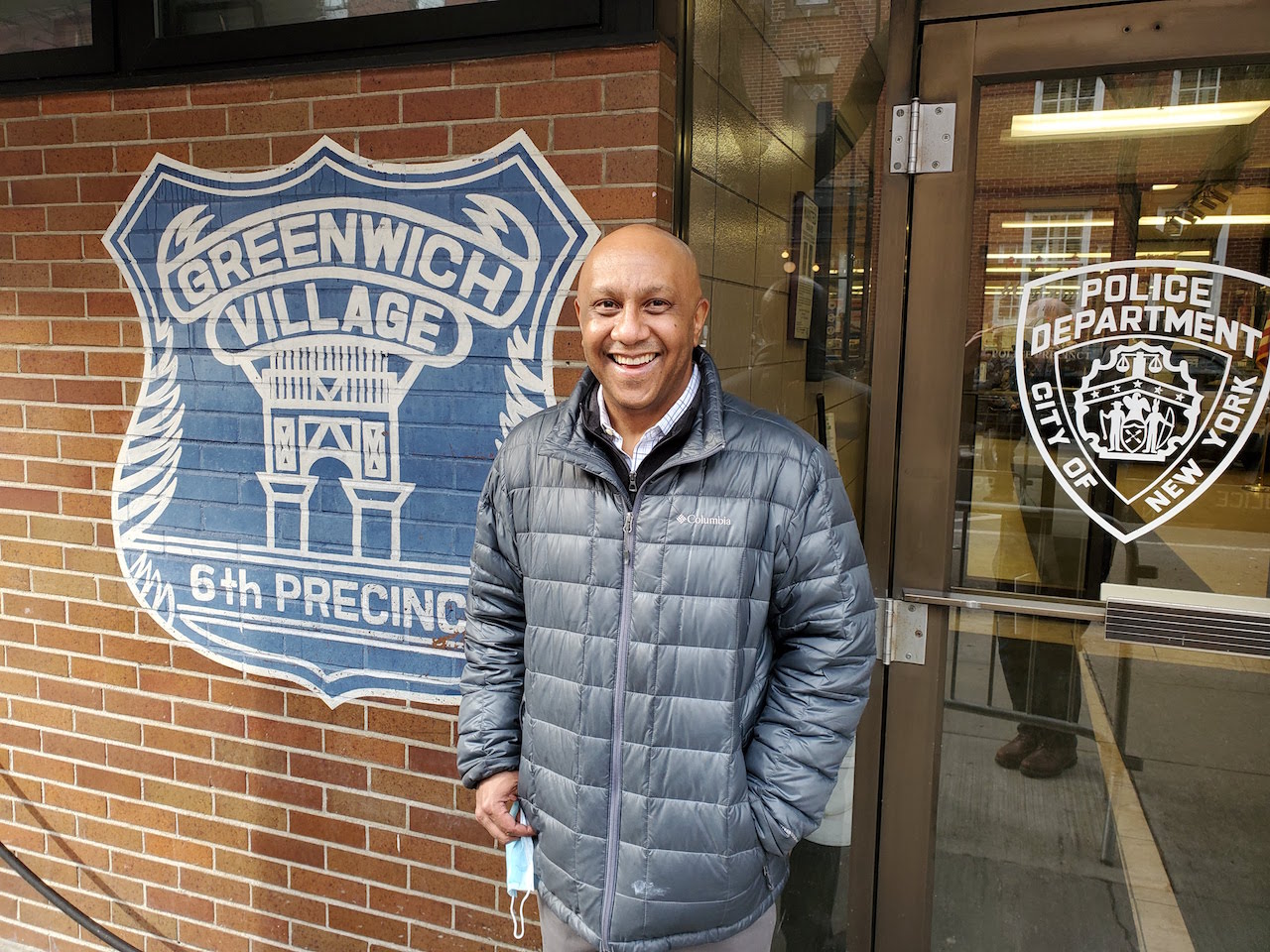 Detective Robert Jackson after his "walkout" farewell at the Sixth Precinct on Feb. 26. (Photo by The Village Sun)

BY THE VILLAGE SUN | As Maureen Remacle, the president of the Sixth Precinct Community Council, put it: “It’s the end of an era.”

The amiable, easygoing Jackson spent all of that time at Greenwich Village’s Sixth Precinct, the last seven years in the community affairs unit. To friends he’s known simply as “RAJ” (pronounced “rahsz”), for his initials, R.A.J.

In a special honor only given to its longest-serving members, the Sixth gave him a “walkout”: The precinct’s officers lined both sides of W. 10th St. and clapped and cheered as Jackson walked through them down the middle of the street. He then got into a car and ceremonially drove off — only to drive right around the block and return to continue the celebration with a party inside the station house.

In an interview, a few days before the walkout, Jackson said, for him, the Sixth was the ideal precinct in which to work.

Jackson, 53, lives in Riverdale, in the Bronx. He grew up in New Jersey, where he went to Rutgers University, majoring in political science.

He entered the Police Academy at age 26. Upon graduation he was given a “dream sheet” on which to list precincts in which he wanted to work. Living on the West Side at the time and wanting an easy commute, he asked for all the West Side precincts.

“I just knew I wanted to be in Manhattan,” he recalled.

He got assigned one of his picks: the Sixth.

Jackson spent his first five years as a patrol officer, working the midnight shift. He then switched to the Street Enforcement Narcotics Unit, or SNEU, for nine years, focusing on drug arrests. Next, he spent three years on the Sixth’s anti-crime team’s midnight tour, where his job was to look out for things like store burglaries. After that, Jackson logged five years as a crime prevention officer, doing things like helping stores set up security cameras or handing out pamphlets to raise awareness about handbag theft or the importance of securing air conditioners. He capped off his career by serving as a community affairs officer, dealing with community issues and the press.

“I hope I got all that right,” he quipped after ticking off all his stints in different units. “The numbers should add up to 27 years.”

Having clocked more than 20 years, Jackson will be getting a full pension, starting in April. Sometimes ex-cops, after retiring, start a second or part-time career, sometimes in the security field. But Jackson, who could have retired seven years earlier, is not rushing into anything.

“I have no plans,” he laughed. “No plan at all. Take a couple of months off. … I don’t know what I’m going to do. Read more, travel more — obviously, I gotta wait for the coronavirus to go away.”

Asked for favorite memories of his time at the Village precinct, Jackson said, “I was in Washington Square Park all the time. I loved the park. It’s one of my favorite places. I still see a lot of the people [there] that I used to interact with 20 years ago. A lot of the chess guys are still there. I walk down Washington Square Park and people still call out my name.”

Asked about good arrests he made, Jackson, reflected, “So many. … I can’t even think of any.” But, after a few seconds of flashing back, he mentioned one.

“When I was in anti-crime, we caught a burglar — he had done about 40 burglaries,” he said.

In fact, Jackson had been mulling working a bit longer, maybe to the 30-year mark. He thought about keeping on because, he said, “I enjoyed it. I enjoyed working at the precinct.”

But he said, in the end, it just felt like it was time, plus he admitted, last year was “a busy year.”

“2020 was very interesting,” he said. “We went through a lot at the precinct. The precinct was very active in a lot of the social stuff that was going on. We had a lot of protests, a little rioting. We had to deal with the pandemic.”

The precinct still has movable barriers up on W. 10th St., he said, because there are ongoing protests in the neighborhood. On Thursday evenings there is a Black Lives Matter transgender protest outside the Stonewall Inn, on Christopher St. And there’s always the chance a protest will pop up in Washington Square.

Asked how he and other officers at the Sixth reacted to the wave of extreme anti-cop sentiment after police killed George Floyd in Minneapolis last May, Jackson said he felt the community stood by them.

“It goes up and down,” he said of public perception of police. “But I think that the West Village community really rallies around their police officers. Nationally or even citywide, police are under the microscope. But the community here is really behind them.”

Jackson said he enjoyed working with everyone in the Village.

“Community Board 2, very good,” he said, “Maureen and the [Sixth Precinct] Community Council, N.Y.U., a lot of the bars and restaurants, the local businesses, just a really good, tight community.”

The feeling was mutual.

Speaking after the walkout, David Gruber, a former C.B. 2 chairperson, said, “He was great to the community. He was always there. Seriously, no bulls—. You could call him on the weekend. RAJ was a good guy. It’s hard losing two of these guys in the same year.”

He was referring to Detective Jimmy Alberici, another Sixth Precinct community affairs stalwart, who retired in July after 30 years, also all spent at the Village station house.

“He did a great job,” Alberici, who was at the walkout, said of Jackson.

Asked what qualities are needed to be a good community affairs officers, Alberici said, “Listening…and hearing people. Try to work through differences.”

When Remacle said it was “the end of an era,” she was also referring to Alberici’s retirement, as well as Jackson’s.

Evrim Can is now the precinct’s senior community affairs officer.