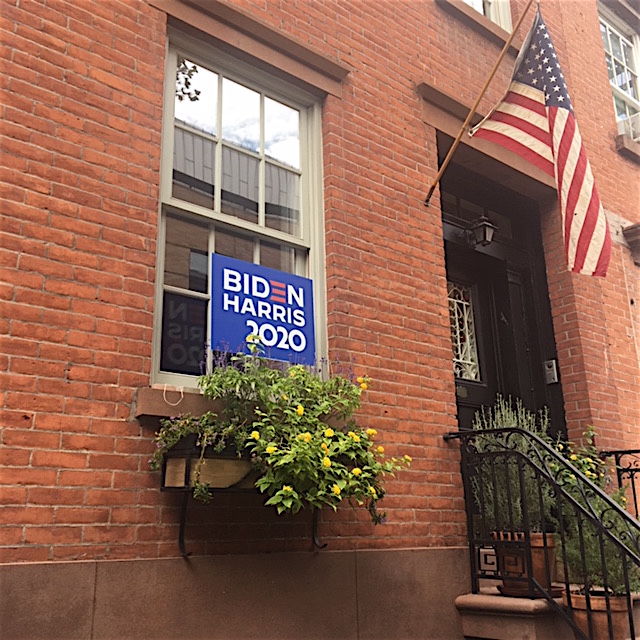 A reassuring sight: a Biden-Harris campaign sign in the West Village. (Photo by Kate Walter)

BY KATE WALTER | “‘Hey, Kate, welcome back,” said my neighbor in the hallway of Westbeth.

We were friends from the singing group, now meeting on Zoom. As we chatted, the first thing I noticed was her Biden-Harris mask. That made me feel good. I had just returned from a long stay in Trump Land in Ocean County on the Jersey Shore.

Earlier that morning, my left-wing friend Gerry had driven me to the train station in Bay Head. As we rode along Route 35 North, I noticed many yard signs for Trump and lots of banners flying from houses. They had increased since I’d arrived in the middle of August. It was now the end of September.

“What happened to your Biden sign?” Gerry asked when she pulled up in front of my house. I had taken it down because my conservative niece was coming the next day with her kids and I didn’t want to upset an already fragile relationship. She and her husband are the only Trump supporters in my family. Gerry thought I should’ve left it up to needle her.

Two weeks earlier I’d asked Gerry to bring over a Biden sign. (It was actually a bumper sticker that I taped into my window.) What prompted me was when the house in front had been rented to a bunch of Trumpers with New Jersey and Connecticut license plates.

As soon as they arrived, they tossed a big Trumpy party (with awful country music). One female guest opened up her car trunk filled with signs. She handed them one: “I Stand for the Flag and I Kneel for the Cross.” They put it in front of their rented house. That did it. I had to counteract this.

Although they did take down the silly sign when the party ended, I still had to walk past their cars with Trump bumper stickers. I saw them giving my house the side eye when they went past it the next morning and saw my Biden-Harris sign. Even though the Trumpers left, I’m planning to put the sign back up when I return in mid-October.

I want to get a Biden-Harris mask to wear when I go into Rite Aid in Lavallette, the local town. The first time I saw some guy wearing a Trump hat in Rite Aid, we were standing in the aisle in front of the dairy products. (Everyone I saw wearing a Trump hat was a white male.)

I couldn’t control myself. “Trump is a racist,” I blurted out.

“Oh, yeah?” he retorted. “If Biden wins, we will become a communist country.”

“You really drank the Kool-Aid,” I replied as I headed to the register.

On my last evening, I went to see the moon over the ocean. As I turned to walk up the ramp, I saw an older white man sitting on a bench with a Trump visor. The New York Times had just run that big story about his taxes.

“Trump is going to jail,” I said and stomped off.

“Why are you doing this?” asked my therapist, worried about my safety. I told her I hate Trump and it offends me that people are walking around wearing these hats in the county where I grew up as a summer resident. They can wear their stupid hats and visors but they’re not getting away without me commenting. Maybe if I get the Biden-Harris mask, I’ll be able to keep my mouth shut.

I have often wondered how my ultra-liberal friend Gerry can live in such a conservative area year-round. But people are attracted to the area’s natural beauty. Gerry loves the beach life and still goes boogie boarding at 78!

Barnegat Island is a narrow strip of land between the bay and the ocean and the beaches are beautiful. That’s what attracted my parents so many years ago. It was also an affordable area for them to buy a bungalow in a small summer community.

When my mother died three years ago, my siblings and I inherited the house in Ocean Beach that my parents bought in 1949. I’m glad my mother lived long enough to vote for Hillary. Mom and Gerry used to play Scrabble together.

Ocean County was always solidly Republican in terms of the people who live there year-round. The second-home owners tend to be Democrats from North Jersey or New York City. As more people from North Jersey relocate to Ocean County year-round, the demographics are changing. My liberal brother moved his family there many years ago. He too hates Trump.

When I was living in the bungalow during the month of September, I noticed way more people than usual were around because they are working remotely and their kids are going to school remotely. I wondered if some would decide to relocate permanently.

Considering the changing demographics, I would have expected to see a few more Biden signs. During my bike rides, I saw only one, while I was blinded by houses with two or three Trump banners blaring from their rooftops. Very ostentatious. Maybe they feel a need to do this because New Jersey is a blue state.

It’s always a culture shock staying in Ocean County since I live in Greenwich Village.

But this year it was more intense. As I walked the hallways of Westbeth and visited the courtyard, I felt grateful for the warm “welcome home” greetings from neighbors and staff. And I felt grateful to live in New York City.

I’m still dreading winter but at least I won’t see any Trump hats in the Rite Aid on Hudson Street.