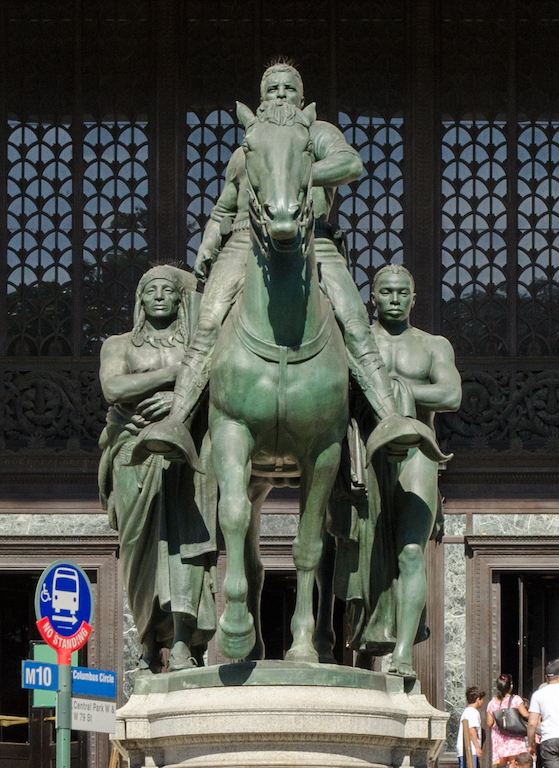 The Theodore Roosevelt equestrian statue at the American Museum of Natural History, which has always struck so many as so wrong, is finally slated for removal.

Remembrance of embarrassing things past: A president, a statue and history

BY JUDITH MAHONEY PASTERNAK | In the latter half of the ’60s, when I lived around the corner from the American Museum of Natural History, I often pushed a baby carriage down Central Park West, past the front of the museum. And every time I passed the the larger-than-life equestrian statue of Theodore Roosevelt there, I was appalled.

It was a turbulent moment in U.S. history — if not as turbulent as this one, which seems to be setting a new benchmark for turbulence. If no longer a child, I was still young enough to be what you might call an adult in process. I wasn’t an active participant in any of the turbulence, that is, not involved with any activist group. But I dutifully demonstrated in New York City and Washington for civil rights and against the war in Vietnam. Although I was writing advertising copy professionally, I hadn’t yet found my own voice to write with; that wouldn’t happen until the explosion of second-wave feminism a few years later.

It’s for those reasons that all I could do about the Roosevelt statue was be appalled. There he sat, atop his horse, dressed head to toe in his Rough Rider uniform, while on one side of the horse walked a half-naked Black man and on the other a half-naked Native American. And I would look at them, and think of Harlem only a mile or two to the north, and wonder how it was that no one had set dynamite to him and the horse he rode on on. The statue was morally repellent, but it never occurred to me then that there was anything I could do about it. Meanwhile, I did take my children to the museum as they grew.

Years passed. Feminism called me, and I answered in my own voice. I became a journalist and writer, and one of the things I wrote most about was movies. By the mid-’80s, I was writing regular reviews for what was then the left paper of record, the Guardian Newsweekly. But I still lived around the corner from the museum, and I still passed that statue every few days, and it still appalled me.

Then one week the Guardian sent me to the Margaret Mead Film Festival, an annual event at and produced by the American Museum of Natural History that screens “groundbreaking, international, nonfiction films [with] fresh cross-cultural perspectives.” My assignment was to see as many of the films as possible and write one big piece containing capsule reviews of the ones I found worth mentioning.

There was a catch. No one reads two pages of capsule reviews unless they’re presented as part of a unifying idea. The finished piece would not only have to describe the individual films, but put them in a context that said something about why they mattered collectively. I took copious notes over the festival’s several days, writing the capsules as I went along — but as of the last day, I had no idea how I was going to tie them together.

Until, entering the building at the front entrance, I looked again at the Rough Rider, riding the horse he came in on to nowhere, his half-naked captives alongside, and thought I heard the horse laughing at the arrogance of the man on his back.

And I wrote about the diverse ways in which the festival’s films challenged that arrogance, and about the horse laugh I had heard in the distance, and the Guardian published it with a big photo of the statue, and that was that, until now.

Now it seems the museum has belatedly come to feel ashamed of the statue that has appalled me for so long and is going to remove it. But I don’t feel the triumph I might have expected. Instead, I have a nagging qualm.

What if we removed all such monuments, taking George Washington out of Washington Square, Christopher Columbus from Columbus Circle, et cetera, et cetera, et cetera? What if we removed from the public eye all the bronze and marble celebrations of the men who thought they were the chosen leaders of a master race? What if we erased from our collective memory the fact that we used to celebrate those men — but left the dominion they built still standing? Would we not be ignoring the warning that those who cannot remember the past are doomed to repeat it?

So I propose another solution: Move them — all of them, starting with the New York City Rough Rider and the great phallic symbol on the National Mall. Move them to a new home created just for them, a national open-air museum, located, appropriately enough, at the foot of the Mount Rushmore National Monument. Take them there one at a time, and label each one honestly, including, along with each man’s accomplishments, the number of people of color he slaughtered, the number of slaves he owned, and the number of ill-paid soldiers he drafted to do his dirty work.

It’s a long-term project, of course, and won’t be cheap. But it shouldn’t take longer than the 14 years it took to build Mount Rushmore (the sculpture, not the hill itself), and the cost could come out of the grotesquely swollen U.S. military budget. It should include a line item for the purchase of the land from the living descendants of the Lakota and other tribal people who used to live there, who might sell it back for a reasonable price if the site were called the National Museum of Repentance and Restitution.

I so want to take my grandchildren to that museum.