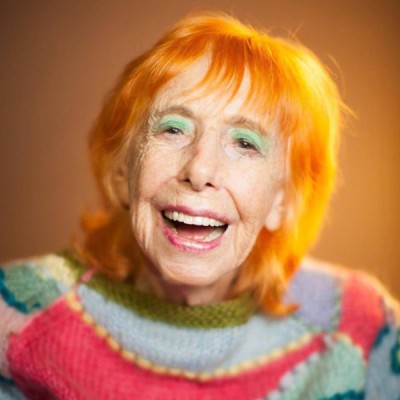 Edith Stephen, a dancer and choreographer who studied with masters like Martha Graham and Jose Limon, died on the evening of Thurs., March 18, in her Westbeth studio. She was 101.

With her by her side were five close friends and her niece. Jacqueline Basker said she showed her the latest version of Stephen’s new film, “Sound Into Silence,” which they were working on together.

Stephen was a dancer in her younger days but, in later years, channeled her creativity into filmmaking. In late 2017, she was named a Westbeth Icon. The award honors Westbeth senior residents who continue to passionately create art.

Edith Stephen wanted more than her share of the good, free things in life: attention, affection, love, sex, fun, friendship, camaraderie, conversation, loyalty, creativity,  sunlight, a little solid ground to dance a shuffle, and views of the Hudson River from her Westbeth apartment on clear days.

When I first met her I didn’t quite trust her, for the same reasons that Elaine Shipman absolutely adored her. They had bonded in Paris when Elaine was 20-ish and Edith was 40-ish. They shared thrills and disappointments, wild and unimaginable Days of Heaven. She gave Elaine permission to use her freedom without boundaries, as long as she was expressing her inner being through her craft; she comforted Elaine when things got tough.

A video of the event on Jan. 18, 2018, when Edith Stephen, then age 99, was honored as a Westbeth Icon. To watch the video, click on the headline above or click here.

She was always “Tante Edith” to Elaine and to a generation of younger dancers poets, singers and artists: Susan Wells, Janet Houseman, Primavera Boman, Austin Alexis, Barbara Ensley, Linda Diamond, Kay Hines, Barbara Christopher and others. Now they will mourn her death.

Edith was one of Jose Limon’s first dance students, and it appears to me that she held on to Limon’s early modernist esthetic: dedication to narratives that put the writhing human form in the center of actions that swung between distress and ecstasy, a dance esthetic that inspired visual artists of the early 20th century, from Auguste Rodin to Abraham Walkowitz.

About 20 years ago Edith performed at my Spring Studio. Standing in the center of the model platform under the spotlight, thin and frail of body, nearly 80 years old, her bright fluorescent-red hair glowing like fire, holding a piece of paper in her hands, she read aloud something that a politician had said. She didn’t agree with it. She didn’t like it at all.

She tore the paper into bits and threw the pieces beneath her feet and stomped on them, performing a dance that ground the bits of paper to shreds. It was then that I began to love Edith as Elaine loved her, for her very existence, for her very insistent existence.

At about the same time, Edith hired a young man from Poland, a videographer, to work with her on a project. One day he asked a favor of her. Claiming to have Jewish ancestry, perhaps only in order to persuade her to act as a matchmaker, he confessed to her, “Edith, I am lonely. I need a girlfriend. Can you introduce me to a nice Jewish girl?”

She turned her head toward him and answered him in all sincerity, “How about me?”

Edith Stephen had been planning her birthday party on Fri., April 2. So friends and family will make it a Zoom birthday party memorial on that day at 7 p.m.