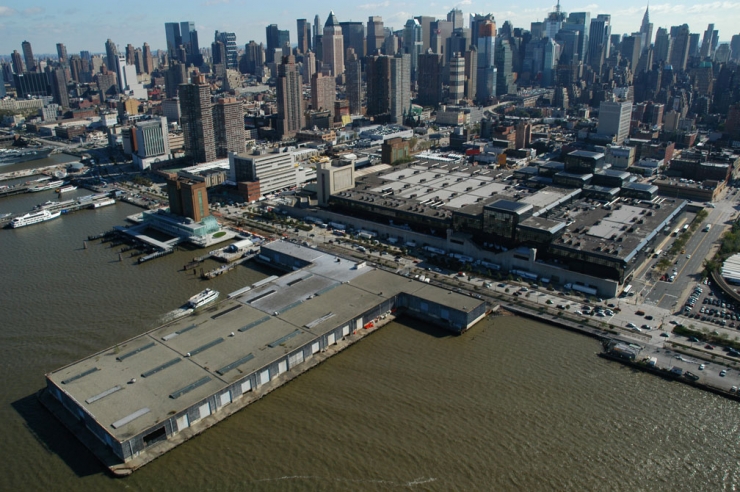 The existing pier shed of Pier 76 would need to be razed for any redevelopment plan. (Google)

BY TOM FOX | Governor Andrew Cuomo’s strong and decisive action has finally forced the city to vacate Pier 76 in the Hudson River Park. I believe he’s created a tremendous opportunity to move forward with the redevelopment of Pier 76 now. Focusing on implementing costly and time-consuming interim improvements would only delay the completion of the park.

With two years remaining in his current term, Cuomo can advance his effort to finish the Hudson River Park by taking advantage of this opportunity to think big and create a truly amazing asset for the community, the park, our city and the state.

The Hudson River Park Trust established a Pier 40/Pier 76 Task Force last year to recommend alternatives for the future development of both those piers, at W. Houston St. and W. 36th St., respectively. The Trust and Community Board 4 developed an interim plan for Pier 76 that was first proposed last November, and recent news articles included that rendering of the proposed interim public use of the pier.

I understand that residents of C.B. 4, strongly support interim public use. After 22 years waiting for the city to do the right thing, they have every reason to be impatient, especially with the dearth of open space in that segment of the Hudson River Park.

However, focusing on interim use would be a mistake, and hopefully the governor will move as forcefully as he did to vacate Pier 76, to request that the Trust issue a request for proposals (R.F.P.) for the redevelopment of Pier 76 as soon as possible. Permanent open space could be created in the same time frame required to implement the interim improvement, and pursuing a more comprehensive approach to the area’s redevelopment could greatly magnify benefits to the community.

Shortcomings of an interim-use plan

• The entire pier structure would have to be demolished. It was built in the 1960s and likely contains asbestos. Pier 76 sits above an estuarine sanctuary, which would require significant protections during the demolition process.

• Pier 76 has been a tow pound since the 1970s and the pier deck is contaminated with oil, gasoline and battery acid, leaking from hundreds of thousands of cars over the years. The E.P.A. has identified chemicals, heavy metals and carcinogens in tires that the deck — which will have to be decontaminated — has been exposed to for 40 years.

• The shoreline bulkhead and piles holding up the pier haven’t received adequate maintenance. The Trust is spending $100 million protecting Pier 40’s piles. Pier 76 is one-third the size, and estimates of $20 million for its stabilization aren’t out of the question.

• All of that would need to be completed before interim improvements, which would allow interim public use, could be built.

Given the cost, regulatory approvals and time required to implement interim improvements, it’s possible that adequate public funding may not be readily available. The Trust surely doesn’t have the required resources. It would be a disservice to the community, and the park, to pursue interim improvements when permanent public open space on Pier 76 could probably be built in the same time frame.

Issue an R.F.P. for redevelopment of Pier 76 now

Some say the economic climate is not right to issue an R.F.P. and there would be more interest during a more favorable economy. However, we are talking about 5 acres of Midtown Manhattan, on the waterfront, in the middle of a world-class waterfront park. The real-estate community doesn’t make their decisions based on what’s going to happen in the next few years.

Some involved citizens, who I respect, have suggested that getting the maximum revenue will require consideration of hotel, commercial office or even residential development on the 50 percent of the pier that is available for commercial development. Those uses are prohibited by the Hudson River Park Act. The act could be amended, but what should it be amended to allow?

Without a realistic development proposal, it would seem odd to amend the park act based on assumptions, with no certainty on what type of noncompliant use should be allowed, if any. There are currently viable commercial uses, consistent with the park act that may be proposed.

There are always concerns about traffic, but television, film and broadcast studios don’t generate large volumes of traffic and the park act limits associated parking spaces. Concerns regarding traffic crossing the park esplanade/bicycle and pedestrian path would depend on the commercial use proposed. However, the front of Pier 76 is more than 600 feet long, with ample room to gently slope park elements above an access roadway, if necessary.

Potential developers would surely propose much more creative concepts for Pier 76 and, if any proposed development precluded by the park act was desired, we would understand what we were amending it to accommodate.

Integrate Pier 76 into the community

The governor has created a bigger opportunity if we expand our vision a bit and integrate Pier 76 more closely with the local community by enhancing connectivity. Such a plan was included as phase two of the governor’s plan for expansion of the High Line, highlighted in The New York Times today. I would encourage the governor to tie Pier 76’s redevelopment more closely to the local community, adjacent attractions and Midtown, and to do it now.

Building bridges across W. 34th St. connecting the High Line to the Javits Convention Center, and across Route 9A to link Javits to Pier 76 would connect Pier 76 closely with the community. The High Line would then terminate at a grand public park on the waterfront, instead of spilling down onto 34th St. The accompanying Google Earth screenshot illustrates the concept, showing the location of the bridges in red. Obviously technology and graphics are not my strong suit.

The Javits Center is directly across Route 9A from Pier 76, and I.M. Pei’s original design for Javits anticipated a bridge to the waterfront when Westway was the West Side waterfront’s planned future. There is even an existing portal for access into Javits. Javits also has a wide roadway on its western side, facing the river and Pier 76, at about the same elevation as the High Line directly to the south across W. 34th St. Capturing this opportunity would:

With the governor’s leadership, the Trust could issue an R.F.P. for redevelopment of Pier 76 in the next few months, with a summer/fall 2021 submission date. Developers should be required to assume the cost of removing both the existing pier shed and hazardous waste, plus stabilizing the pier, including any upgrade required for their proposed redevelopment. Responding bidders could be vetted and selected sometime next year.

The Trust should plan and fund the permanent park improvements working with the local community. Focusing public resources on demolition, remediation, pier stabilization and construction only to do interim improvements is a distraction that would delay the park’s completion, especially when the permanent public space at Pier 76 could be built in the same time frame.

The governor deserves a great deal of credit for forcing the city to vacate Pier 76. I believe he has created a unique opportunity that should be captured now. However, the Trust has created unrealistic expectations by developing plans for interim improvements at the pier.

Limited public funding is better spent developing permanent open space and designing and building the bridges required to connect the community and all the area attractions and enhance pedestrian safety. The bridges could be funded by a variety of mechanisms and might even be eligible for federal transportation funding that might otherwise not be available for park use.

New Yorkers are very fortunate that Governor Cuomo has proven that he really cares about the Hudson River Park. Providing millions in new funding in the past few years and his swift action to clear Pier 76 have shown his determination to complete the Hudson River Park. Hopefully, he will consider another bold action and ensure the creation of a magnificent new window on the Hudson River that is connected to the community and will benefit the public in perpetuity.