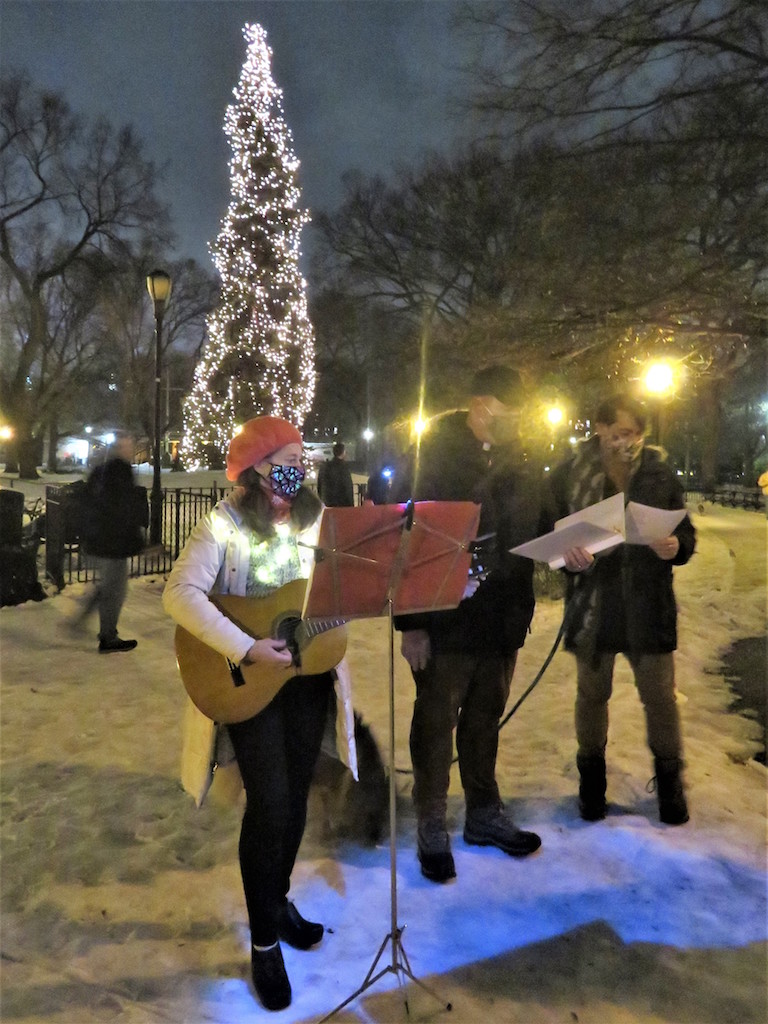 BY EVERYNIGHT CHARLEY CRESPO | The Christmas story is meant to reverberate in all places and times. The events that occurred some 2,000 years ago can resonate with our personal history. Sometimes having a guide can make the experience more relevant.

Elizabeth Ruf Maldonado of the local punk bands the Head Peddlers and Sewage recently led what she called a “Renaissance/Punk Nativity Walk” in the vicinity of Trinity Lower East Side Lutheran Church.

The Dec. 20 walk included stops at several historic neighborhood sites, where the parish’s pastor, Reverend William Kroeze, and others shared reflections about the significance of this local history. Kroeze made parallels between the local history and segments of the Christmas story and read aloud the accompanying scriptures. Maldonado sang, played guitar and led about a dozen participants in the caroling of both traditional and punk rock Christmas songs.

Leaving Trinity Lutheran Church, the first reflection was in Tompkins Square Park, the gathering spot for political movements since 1857. Kroeze connected this site with the angel Gabriel’s announcement to Mary that she would give birth to Jesus. Maldonado led the singing of “Lo How a Rose E’er Blooming” in view of the park’s Christmas tree. Leaving, the participants sang “Ding Dong Merrily on High.”

The next stop, the Museum of Reclaimed Urban Space (MoRUS) and C-Squat, represented the squatters movement of the 1980s. Kroeze compared the symbolism of this site to the government forcing Joseph and Mary to leave their home. Maldonado led the singing of “Nowell Sing We Both All and Some.”

Moving along, La Plaza Cultural symbolized the community gardens movement of the 1980s. Here, the reverend read the scriptures of the birth of Jesus among the livestock. Maldonado led the singing of “What Child Is This?” and “Away in a Manger.”

The next stop on the route, the East Side Hebrew Institute (ESHI), was founded in 1910 by Russian immigrants and, according to Kroeze, housed orphans who worked as “newsies.” He connected this site with the revelation of Jesus to the shepherds, who were young men living in poverty. Maldonado led everyone in the singing of “Angels We Have Heard on High” and “While Shepherds Watched Their Flocks.”

In 1979, the former P.S. 64 became CHARAS/El Bohio, a community center that grew into an axis for local arts and political movements. Stopping in front of the vacant old school building, Kroeze shared the story of the three wise men bringing their gifts to Jesus. Maldonado led in the singing of “Little Drummer Boy.”

The Renaissance/Punk Nativity Walk circled back to Tompkins Square Park, this time near the Slocum Memorial Fountain. This site memorializes the local German residents who died in a fire aboard the excursion steamship General Slocum in the East River in 1904, reportedly the city’s largest-scale disaster of the 20th century. Kroeze read the story of Herod massacring all the newborn children of Bethlehem, and Mary, Joseph and Jesus fleeing to Egypt as political refugees. Maldonado led in the singing of “Coventry Carol (Lully Lulla).”

The Renaissance/Punk Nativity Walk concluded back where it started, in the courtyard of Trinity Lower East Side Lutheran Church, at Ninth St. and Avenue B. Maldonado led in the singing of “Silent Night” in English, German, and Spanish.