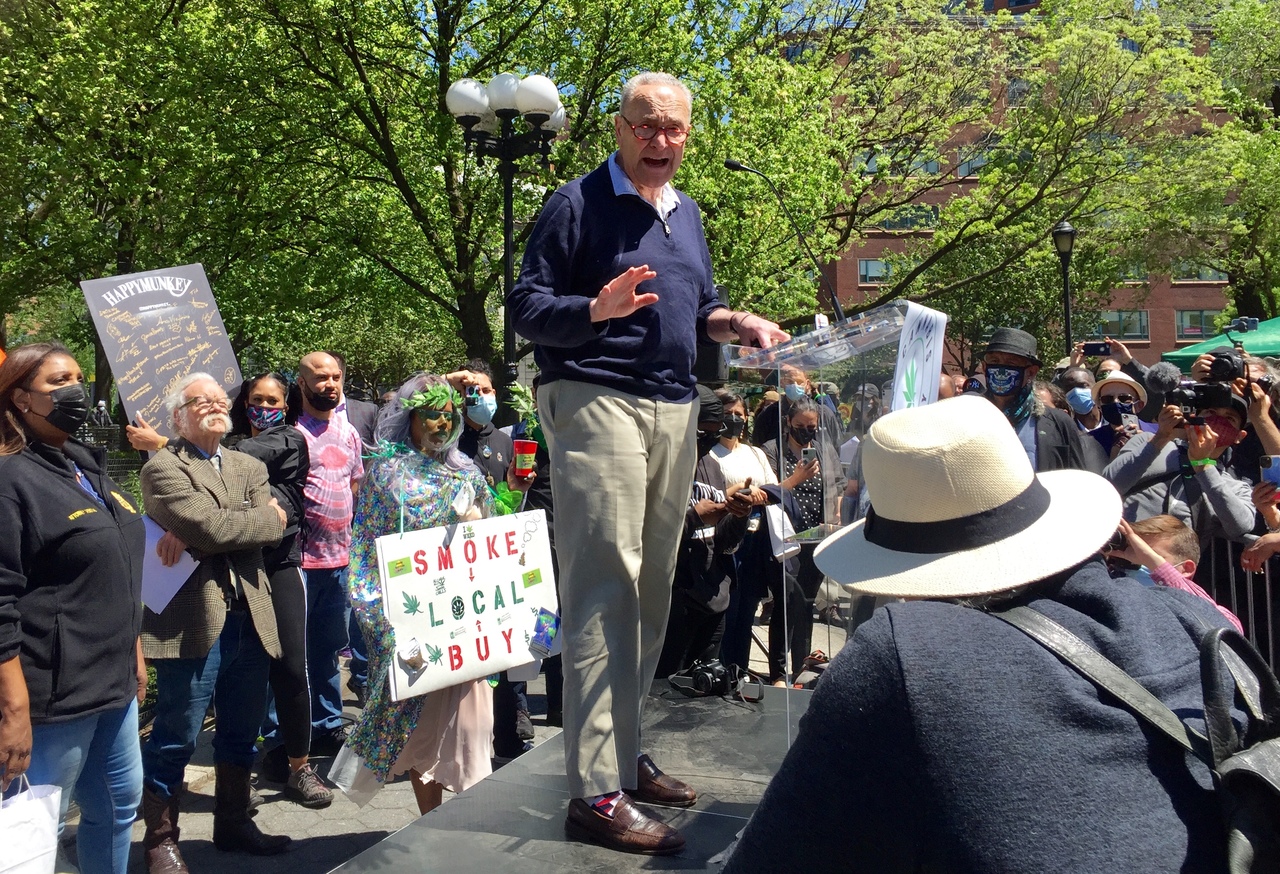 Pols for pot: At cannabis rally victory lap, politicians pay respect to hippies who were there first

BY PAUL DeRIENZO | The annual New York City Cannabis Parade and Rally jumped off Saturday with a spirited march down Broadway led by a giant joint to a rally at Union Square Park. The rally has been held on the first Saturday in May for at least 50 years, originating as a Yippie-led peace rally in Tompkins Square Park.

This year was different. It was the first since Mary Jane was legalized in New York State. And this time instead of narcotics police, the march got a friendly visit from the state’s top cop, Attorney General Letitia James, and the U.S. Senate Majority Leader Chuck Schumer.

Jerry the Peddler has been a frontline activist for legalization for the past 50 years.

He said the first pot parades were targeted by cops, who raided the homes of activists and infiltrated and arrested potheads on the march.

Dana Beal, the doyen of pot legalization, has a slightly different version of the story. He says the Yippies organized the first pot parade to mediate a turf dispute between hippies and young Puerto Ricans on the Lower East Side.

Most of the annual parades originated from Washington Square Park and marched up to Central Park for a smoky gathering in the Sheep Meadow. In the ′80s the parade morphed into a two-day affair with a Rock Against Racism concert at the Naumburg Bandshell, featuring diverse music acts and speeches on the second day. But the city evicted them in the late ’80s after their case went to the United States Supreme Court.

In the ’90s there were dueling rallies marching on Fifth Ave. in opposite directions. The dispute pitted Dana’s view touting marijuana as a medicine versus Jerry’s crew who just wanted to celebrate the joy of getting high. Both sides were right, but the strictly illegal status of muggles then often added an apocalyptic, all-or-nothing air to the movement.

Sometimes the authorities ignored the rally and other times, like under Mayor Rudy Giuliani, there could be a lot of arrests. Rudy was especially rough on pot, lumping it in as another quality-of-life crime, and setting the stage for stop-and-frisk policies and mass incarceration of potheads under Mayor Mike Bloomberg. The tide began to turn in recent years, despite New York’s reputation as the “marijuana arrest capital of the world,” as Tish James said Saturday in Union Square Park.

The added joy of marching in the first pot parade after legalization added a bittersweet note to the festivities. In April a coalition of groups led by the Drug Policy Alliance got Governor Andrew Cuomo to sign MRTA, the Marijuana Regulation and Taxation Act. The law went onto immediate effect, allowing New Yorkers to possess three ounces of the herb on the street and five pounds at home. The bill also legalized possession of up to six pot plants. James said at the rally it was the most sweeping pot legalization bill in the nation.

Besides James, a bevy of politicians spoke at the rally. In the past it was a few iconoclasts and visionaries, like Assemblymembers Richard Gottfried and state Senator Liz Kreuger, who introduced cannabis reform year after year.

On Saturday it was Senate Majority Leader Chuck Schumer who headlined the speakers list. He declared that “bigoted” marijuana laws have hurt millions of people. And he took credit for pushing Cuomo to “get off your butt” and sign MRTA, because the bill had been languishing during the COVID-19 pandemic.

Although pot advocates in New York are happy legalization passed, pot is still illegal at the federal level. As a Schedule 1 drug, pot has no accepted medical use, putting it in the same class as heroin, hampering the emerging cannabis industry’s access to federally regulated banks.

New Jersey Senator Cory Booker, Schumer and Oregon Democrat Ron Wyden are planning a Senate bill that would overturn federal prohibition, if the law can overcome the partisan gridlock on  Capitol Hill.

Other politicians spoke, mostly from the new generation of elected officials who have been embraced by their diverse districts to bring change, including state Senators Julia Salazar, Alessandra Biaggi and Jessica Ramos.

Dana Beal, who marched in the first New York City pot parade, was there to give his insights into the history of the marijuana movement and also look to the future. Beal said legalization of entheogen plants, like psilocybin, “magic mushrooms” and ibogaine, would be the logical next step for pot activists.

An activist who couldn’t be there Saturday was Doug Greene, who was killed in a freak subway accident in 2019. Greene was a stalwart for the National Organization for Reform of Marijuana Laws, or NORML. He had dedicated much of his adult life to marijuana legalization and his inspiration was felt by many of his friends who were in Union Square Park.

Unlike some other large events in the ’hood in past weeks, this group, though large, was almost fully masked and vaccinations were encouraged. Beal held a pop-up “Joints for Jabs” event at the end of the rally, where anyone 21 or over with proof of vaccination got a free joint.

DeRienzo is news director at WBAI. He is also a teacher and lifelong pot legalization advocate.