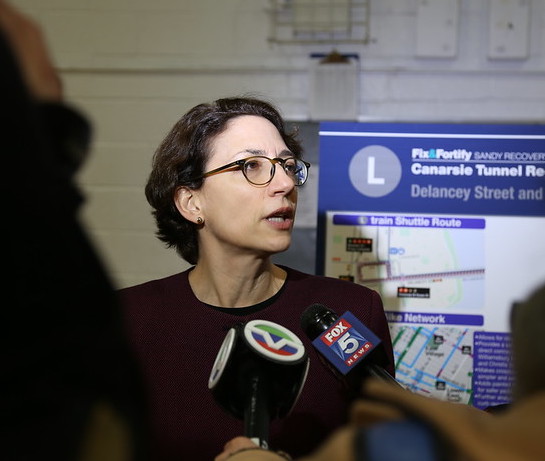 D.O.T. Commissioner Polly Trottenberg at an open house in January 2018 on the plan to fully close the L train's Canarsie tunnel for repairs of damage from Hurricane Sandy in 2012. After Governor Cuomo intervened, the plan was revised so that some subway service was maintained during the repairs. (Courtesy NYC Dept. of Transportation)

Polly Trottenberg, the city’s Department of Transportation commissioner, on Monday announced her resignation from the de Blasio administration, effective in early December.

She has been an advocate for street safety and accessibility, and has led efforts to expand cycling and bus use, with a focus on underserved communities.

While opponents of the 14th St. busway, among others, won’t shed any tears over her departure, Mayor de Blasio hailed Trottenberg’s tenure as a resounding success.

“We all owe Polly Trottenberg a debt of gratitude for her incredible service to New York City,” de Blasio said. “She is a tireless and talented public servant who has made our city safer, fairer and more accessible. I’m proud to have worked so closely with her, and I wish her all the best in whatever comes next.”

“I will always be grateful to Mayor de Blasio for the incredible opportunity to serve the city I love so much, and especially for the chance to lead the 5,800 dedicated public servants at D.O.T.,” Trottenberg said. “I have been honored to work with them and see the passion, creativity and dedication they bring every day to serving New Yorkers, especially during the pandemic of the last eight months.  For now, I just say, thank you, one and all.”

While Trottenberg has not announced new employment, she was asked earlier this month to volunteer on the Biden-Harris transition team, advising around transportation issues.

Trottenberg spearheaded the de Blasio administration’s efforts around a range of transportation issues.

During the pandemic, D.O.T. has led a number of initiatives that have significantly reshaped the city’s streets, including Open Streets, Open Restaurants, Outdoor Learning and Open Storefronts. The Open Restaurants Program, with more than 10,700 participating restaurants, is among the largest in the world.

However, to many residents’ chagrin, the Open Restaurants program has not had any significant public input, despite the fact that the City Council recently voted to make it permanent.

On cycling, under the de Blasio administration, D.O.T. has tripled the extent of the city’s on-street protected bike lane network from 36 miles to more than 120 miles — with a commitment to more under the Green Wave plan — creating key commuting connections and extending further into underserved communities. In recent years, one of every five protected bike-lane miles in the country has been built in New York City.

Also regarding cycling, under Trottenberg’s leadership, Citi Bike is now one of the largest  bike-share programs in the world. Citi Bike is on course to double its service area — including bringing service to the Bronx — and triple its number of bikes to more than 40,000 by 2023.

On buses and mass transit, the administration worked closely with M.T.A. New York City Transit, expanding access to buses, including an additional 64 more miles of dedicated bus lanes around the city since 2014, for a total of nearly 138 miles.

The 14th St. busway, begun in 2019 and made permanent this year, has increased ridership and decreased travel times, according to the de Blasio administration.

However, during the pandemic — which has skewed ridership and traffic numbers down — the city has not been making data about the busway publicly available, feeling it would not paint an accurate picture.

The 14th St. busway was initially pitched a few years ago as critically needed due to the much-hyped, looming “L-pocalypse” subway shutdown. But after Governor Cuomo intervened, keeping the L train from being completely shut down for repairs, City Hall then quickly flipped the script, saying the busway was now urgently needed because the M14 was simply too slow.

Also, de Blasio decreed by fiat that the busway was permanent less than halfway through an 18-month-long pilot project that was supposed to be reviewed by the community at the end of the pilot.

Under the mayor, New York City was the first American city to adopt Vision Zero. DOT has served as the lead agency since 2014 for a multi-agency effort to reduce traffic crashes and fatalities through enforcement, engineering and education. Traffic fatalities in New York City have been recorded since 1910 — and six of the city’s seven safest years have happened since 2014.

However, in 2019, traffic fatalities — including a tragic spike in cyclists’ deaths — increased for the first time during de Blasio’s tenure. Some attributed this simply to the fact that more cyclists are on the streets, though Trottenberg blamed SUVs and gentrification in industrial areas.

As part of Vision Zero, Trottenberg advocated for state legislation that allowed the city to lower its default speed limit to 25 m.p.h. and expand its speed-camera program to 750 zones and 2,000 cameras, making it the world’s largest such program.

Since 2014, New York City has undertaken more than 700 street-improvement projects, intended to make streets safer for all users. D.O.T. has added an ever-increasing number of car-free pedestrian plazas citywide, with more than 70 plazas now covering in excess of 20 acres of former street space.

On the technology front, in 2018, D.O.T. started allowing parking payments for all 80,000 metered spots citywide to be made by cell phone via the ParkNYC or ParkMobile apps.

The city also plans to launch an electric-scooter sharing program, for which a request for expressions of interest (R.F.E.I.) for an operator was recently released.

D.O.T. also oversees the operation of the Staten Island Ferry. During Trottenberg’s time helming the agency, the city commissioned three new ferries, two of which are slated to be delivered in the next year.