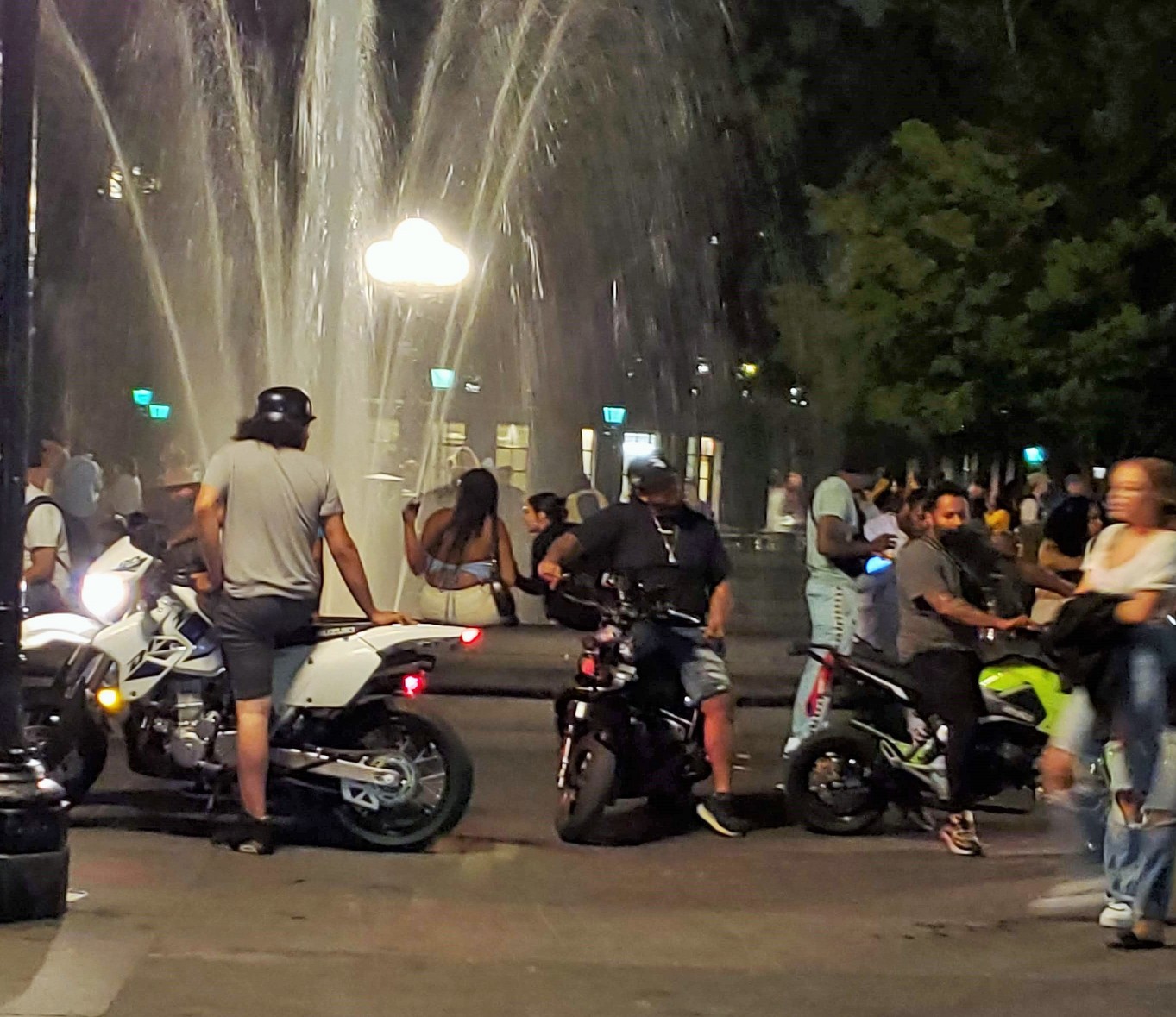 Motorcycles in Washington Square Park on the night of Fri., June 18. (Photo by The Village Sun)

BY STEPHEN DiLAURO | So, the rich have returned to their aeries overlooking Washington Square Park for a few weeks before it gets too hot and they head back to the Catskills or the Hamptons.

These rich folk are upset that the city is noisy. They want the pastoral silence they enjoyed in the countryside. Who did they call to complain? The Police Industrial Government Syndicate, who came up with the idea of a curfew in the park.

Now de Blasio, who will be seeking the donations of those same rich folk as he launches his gubernatorial campaign, is supporting the curfew. Police and government doing the bidding of the rich and corporations (N.Y.U., in this case) is a political philosophy that has a name — fascism.

So, the police, rather than actually enforce the existing regulations, started a “mini-riot” on the night of Sat. June 5, when they clashed with young protesters while trying to clear the park.

There are amplifiers, microphones and other illegal sound devices used in the park, no question. The simple answer to that is to confiscate the amps and so forth, issue a ticket to their owners, and arrest anyone who resists. They can get their gear back after they pay the fine. Instead, the problem has been ignored for years and suddenly the answer is to shut the entire park and use truncheons to attack everyone there.

The F.B.I. recently released a report that said police forces around the country are rife with white supremacists and right-wing extremists. Make no mistake. When you see cops sitting in their cruisers, engines running, air conditioning blowing, noses buried in cell phones, some of them are reading the latest dangerous lies and propaganda from QAnon and other right-wing radicals.

After all, the mission of the police nationwide has devolved in recent years from “protect and serve” to “officer safety uber alles.” Every cop gets up every morning and straps on a gun and heads out feeling above the law. To those who are going to cry “there are more good cops than bad,” I reply, “Bovine excrement!”

The cops and de Blasio also must come around to the idea that marijuana is legal now and it is not a hard drug. (It never was.) The local precinct launched a sweep against (Black) marijuana dealers a couple of days before weed became legal, supposedly on behalf of the same rich people complaining now. My guess is that it was one last chance to feed the Public Incarceration Government Syndicate with more Black men.

I have lived in this neighborhood within a block of Washington Square for years. I have walked through the northwest corner of the park too many times to count; but if I did count, the number would be in the thousands. Not once have I seen anyone using hard drugs there.

I have seen crack smoked and needles used countless times on stoops and under scaffolding as buildings are renovated on the surrounding blocks for the rich and N.Y.U.

So, is the closing of the northwest quadrant of the park really about hard drugs? Or is it accommodating the racism of rich people who are offended by the presence of unemployed Black men? If it was really about hard drugs, wouldn’t we be seeing Big Pharma executives across the river arrested and perp-walked for the opioid epidemic they created, all for profit?

Do the cops believe that hard drug use stops when addicts are removed from a certain locale? Or does it spread to other locations where they can ignore it? Who knows what de Blasio believes, if he believes in anything other than his own superiority and rulership.

There is plenty more that can be done to make the Washington Square Park neighborhood safer, and quieter, for everyone who lives here. Cops should be ticketing Uber drivers, engines always running, and other vehicle owners who take over the bike lane along MacDougal St. and cause traffic jams and beeping horns until well past midnight.

There are civilly challenged motorcyclists and car drivers who ride their penis extensions through the neighborhood every night and use muffler cutouts to make the streets sound like a war zone. That’s the real noise.

Get the cops’ air-conditioned noses out of the latest digitally transmitted conspiracy theory and have them open their traffic summons books. This city needs revenue. So, start fining the Big Pharma workers in their SUVs and the ride-sharing drivers who destroyed the taxi industry.

When, recently, I spoke to two cops on MacDougal St. and asked why they let all those cars defy parking regulations, one answered, “Well, it’s different people every night.” So, good: More people, more money for the city. How hard is that to figure out?

Oh, by the bye, it is different people in Washington Square every night, too. A lot of them are young. They want to celebrate the end of our long civic nightmare. These young people helped defeat COVID-19, too. If they are not violating any noise ordinance, they have a right to celebrate. The police are tasked with keeping the peace, not starting riots.

DiLauro is a playwright and musician who lives in Greenwich Village near Washington Square Park.