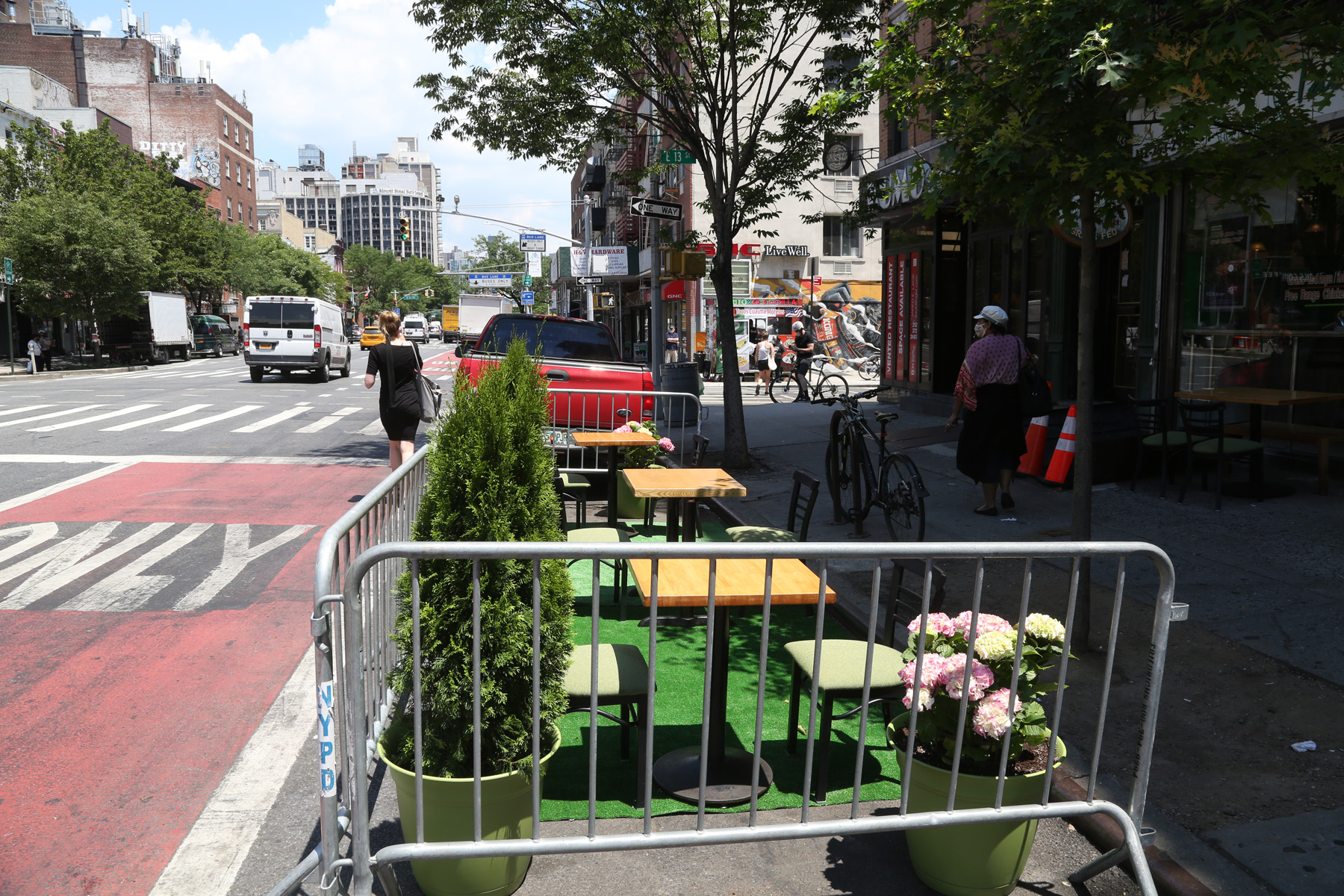 An outdoor dining area in a parking space on First Ave. at 13th St. back at the launch of the city's pandemic-inspired Open Restaurants program. (Photo by © Jefferson Siegel)

BY ARTHUR SCHWARTZ | Back in mid-June, with New York City still in lockdown, and with crowds of demonstrators marching down 14th St. and smashing windows, Bill de Blasio stood on the corner of Seventh Ave. and 14th St.  and declared the 14th St. busway pilot project, which was supposed to last 18 months, a “great success,” and he declared the busway “permanent.”

Our neighborhood was still in COVID shock, most people were not going to work, and 14th St. had been deserted since mid-March. No public hearings had been held, no community board sessions had been consulted, no genuine studies had been conducted. But the mayor, standing in front of boarded-up windows, issued a fiat — it’s “permanent.”

Assemblymember Dick Gottfried, who represents the community north of 14th St., wrote to Polly Trottenberg, the commissioner of the Department of Transportation, about the lack of community input: “We may all agree that the 14th St. project has worked well. But we and D.O.T. are not all-knowing. Before making the project permanent, the City must recognize that receiving public comment might yield differing views and valuable suggestions.”

Fast-forward four months. The city is struggling to revive. Stores and restaurants are suffering. Restaurants that had not closed are allowed to open up sidewalk cafes, since indoor dining is prohibited. At first, tables were allowed on sidewalks. Then D.O.T. issued temporary rules allowing parking lanes, along the curb, to be turned into spaces for outdoor dining.

Some of our neighborhood restaurants tried to revive. (Too late for Sammy’s Noodle Shop & Grill on Sixth Ave. and Saigon Grill on University Place.) We were all happy to see them back, and to have a chance to get out and sit with a friend or a spouse and eat a restaurant meal. A little reminder of our pre-pandemic lives. Even in early October, when the city allowed indoor dining at 25 percent capacity, most of us chose to sit outside.

The rules, however, were unclear. Tables were on sidewalks, alongside the buildings but also at the curb, as well as in the street. Some tables were 6 feet apart with partitions. Some places, like The White Horse, have people sitting closer together with no mask wearing. Many narrow sidewalks are impassable, especially for the elderly or folks in wheelchairs.

As the weather has gotten cooler, some restaurants have built structures, some with poles and plastic sheeting, some now made out of wood, looking a lot more permanent. Some restaurants started playing music outside. I went to one that had live music on the sidewalk. There were no “permits” per se, no controls on hours and noise levels. No applications for exceptions to zoning resolutions. And now, spaces with plastic enclosures have started using propane heaters as the city lifted a ban on their use in New York City.

So, what does “feel-good” de Blasio and his sidekick Polly Trottenberg do? They declare that outdoor dining of the sort we see around the city will be “permanent.” No rules yet, no regulations, no community board input, no plan to return to normalcy post-pandemic. Not a single request from the city for a community board hearing. (Yes, unless we reelect Trump, there really will be a post-pandemic United States.) “Permanent.”

De Blasio ran his “permanent” idea past community boards in October, and the result was outrage. Folks who live in buildings adjacent to or across the street from outdoor eating establishments screamed. They are glad to tolerate the noise and the crowds during the pandemic in order to keep local eateries alive. But “permanent?”

We live in a community with more restaurants per square foot than any in New York. Pre-pandemic sidewalk cafe and cabaret permits — and liquor licenses — were subjects of great debate at community board meetings; the boards negotiated lots of restrictions addressed to numbers of tables, hours of operation and noise levels. But Polly Trottenberg (who I like to compare to Robert Moses in her zeal to ignore local community input) and de Blasio want to ignore all that. And then, despite the outcry, our city councilmember, Corey Johnson, as speaker, asked the City Council to vote to approve the move. And they did. No public process at all!

Is this the last we will hear about this? I don’t think so. Block associations are up in arms and are planning a counter-movement. Last week 35 block association leaders in the South Village and Soho met to discuss a political campaign and possible litigation. Stay tuned!

Schwartz is the Democratic district leader for Greenwich Village and a candidate for City Council in Council District 3.