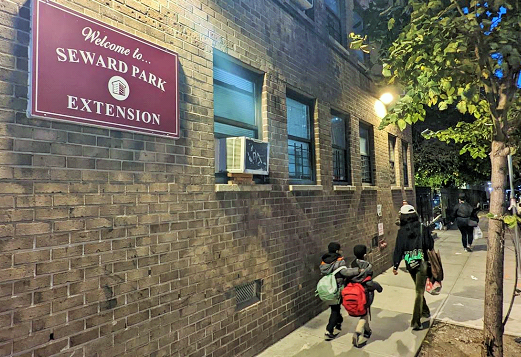 BY MARIA MONICA FERNANDEZ | A complex managed as public housing on the Lower East Side is on its way to being transferred to private management, which has neighbors fearful of rent increases or even evictions.

A few weeks ago, residents of Seward Park Extension, which includes two buildings, received an envelope in their mail that was hard to ignore. All 360 units received a letter from the New York City Housing Authority informing them that their buildings would be converted to a program that uses private companies and funds to manage the housing development and its repairs.

The Housing Authority says that under the new system, repairs to the buildings will be expedited, but residents fear that rents will go up or that they will be evicted.

“There was no vote,” said one resident, who preferred not to be identified for fear of being evicted from the apartment where he has lived for more than five years.

The letter explains that NYCHA will move Seward Park Extension into the Permanent Affordability Commitment Together program a.k.a. PACT. NYCHA presents PACT as a tool to obtain funds from private companies to repair decades of public housing neglect due to lack of federal funding.

Under PACT, Seward Park Extension, with its 796 residents, will be part of the federally funded RAD (Rental Assistance Demonstration) program, which involves a transition from the traditional public housing model, which is assisted by Section 9 federal funds, to apartments in the Housing Choice Voucher Program, or Section 8, a privately funded program for management and repairs.

But other Seward Park Extension residents who spoke to this reporter say that in doing their research on other NYCHA residences converted to PACT, they found that those homes fell into a “gray area,” where neither NYCHA nor the private entity dealt with complaints, grievances or assistance about the residential units.

“The more I researched, the more I realized how bad [PACT] is,” said Christopher Parker, a resident since 1984 of Seward Park Extension. He has been collecting signatures, along with other residents and Councilmember Christopher Marte, to petition to stop the implementation of PACT before the conversion becomes “official” and, Parker fears, residents start getting evicted.

Since NYCHA began implementing PACT in 2016, there have been multiple complaints of noncompliance and violations against residents of housing that became managed by private companies.

A study by Human Rights Watch on PACT’s implementation in New York City reveals that, while it is difficult to draw conclusions on the privatization’s long-term effects — since it is a relatively new program — there has been an increase in evictions in two of the housing developments already under the PACT system, and that the system “has not established adequate oversight measures and protections for residents’ rights.”

Tenants of NYCHA housing — where the Hispanic, African-American, elderly and disabled communities predominate — face a 99-year privatization that “gives profit-driven entities unprecedented control over public housing residents,” according to Human Rights Watch. This would entail new practices for vulnerable-income communities when it comes time to sign new rental agreements, collect rents and raise grievances and other legal issues for the protection of their rights.

James Rodriguez, an associate professor of urban studies at the CUNY School of Labor and Urban Studies and an activist with Residents to Preserve Public Housing, says PACT’s privatization processes have lacked clarity and “have been poor at encouraging collective decision-making,” which can lead to confusion and distrust among tenants.

Rodriguez claims that PACT has not met its goal of improving housing conditions in the communities where the program is already implemented. He cited “mediocre repairs that begin to fall apart in a matter of months, chronic problems, such as lead and mold that have not been properly managed, and problems due to lack of transparency and communication between residents and management.”

Various resident and activist groups have raised criticisms of PACT’s privatization of NYCHA residences and its goal of transferring 62,000 apartments into Section 8. Nevertheless, some Seward Park Extension residents interviewed for this article see the program as offering hope toward ending the years of neglect they say they have received from NYCHA.

Deborah Givers, the president of Seward Park Extension’s Tenant Association since 2020, is in favor of her building becoming part of PACT. Givers described the building as an “unsafe and unsavory” place where, she said, some elderly residents are afraid to leave their units because of the constant presence of teenagers and homeless people who freely come and go, taking advantage of the lack of a lock on the building’s front door.

That lack of security worries other residents, as well, who complain the building’s hallways and elevators are sometimes the scene of drug use, sex, homeless people sleeping and even human feces.

As of this past October at Seward Park Extension, 158,000 outstanding repair orders had been registered with NYCHA. An average of 90,000 orders is the manageable workload for NYCHA housing repairs, according to an audit report on the agency’s maintenance practices. Currently, NYCHA records a citywide backlog of 668,640 open orders.

When asked about residents’ uncertainty regarding the threat of evictions once PACT takes over management, Givers responded that people who say they’re going to be evicted “are guessing.” Since September, Givers explained, NYCHA has held meetings concerning PACT.

“They are not listening,” she said about the uncertainty the change has generated among residents.

NYCHA officials contacted for this article confirmed that Seward Park Extension is in the process of becoming part of PACT but that the transition to the 99-year private management plan would not actually start until 2024. They said meetings would continue to be held in coming months to address residents’ concerns about the change.

According to the agency, tenants will be able to review the complex’s facade maintenance via the Resident Review Committee, and legal assistance will be provided by NYCHA.

Officials said the intention of PACT is not to evict tenants and that strategies are in place for those unable to pay their rent to have their cases reassessed, so that rent does not exceed 30 percent of their income.