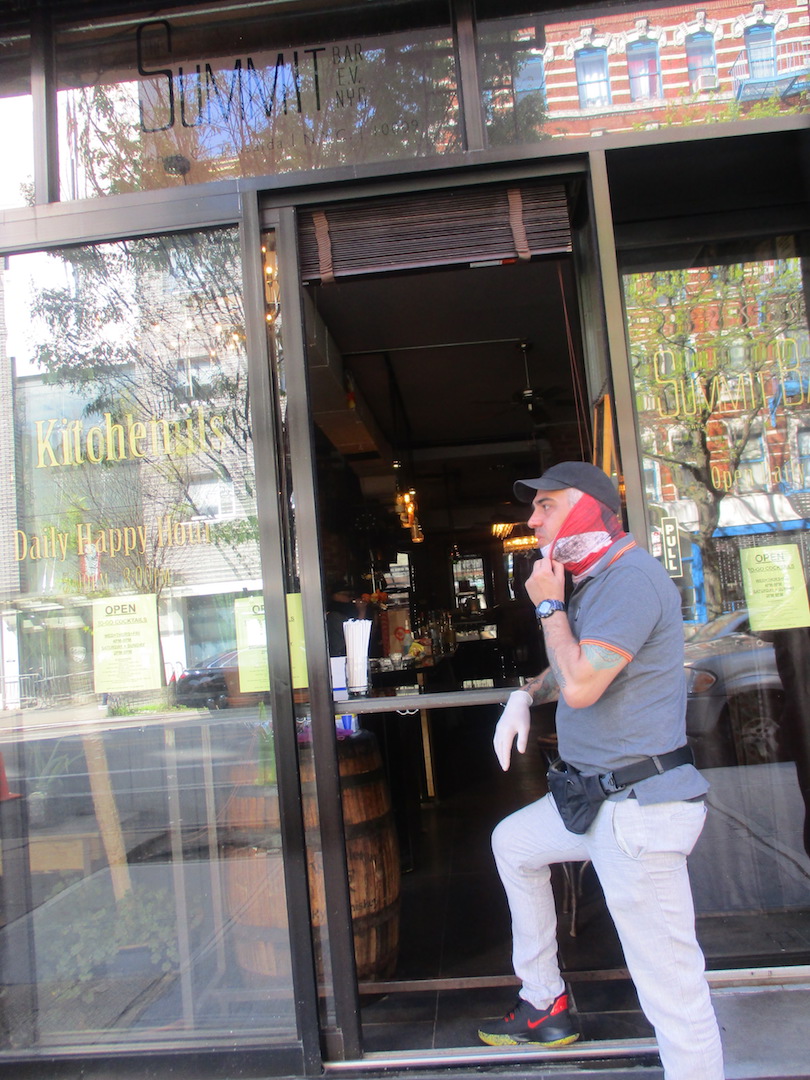 A man got a drink to go at the Summit Bar on Avenue C on Saturday. (Photo by Mary Reinholz)

On a sunny Saturday, signs of renewed life on Ave. C and E. 14th St.

BY MARY REINHOLZ | During the regular business hours on weekdays, a long line of people who are homeless or out of work because of the lockdown snakes around part of E. 17 Street and down Irving Place to the city’s H.R.A. building in Gramercy near Union Square.

“They’re applying for benefit cards,” one of the security guards told me as he stood outside the  building at 109 E. 16th St. “Either they’ve lost them or need a new one.”

“I’m trying to get Medicaid,” explained one of the people in the line, a thin blonde woman in a exercise suit who wore a colorful mask.

The scene blocks away on Avenue C in the East Village on a sunny Sat., May 2, was decidedly different, showing signs of normal Downtown New York life before the pandemic hit. Shoppers browsed the aisles of an Associated supermarket on the corner of E. Eighth St. Several wore no masks but there seemed to be no sense of panic.

“We’re fine,” said Glen Bruno, one of the owners, noting his Loisaida store is open six days a week, Monday through Saturday, from 8 a.m. to 10 p.m.  Bruno and his partners had to vacate Associated’s beloved supermarket on E. 14th St. between First Ave. and Avenue A late last year after a rent hike. That store had been there for 26 years and was a mainstay for seniors.

The former Associated space is now occupied by StuyTown Pantry, a partnership of a First Ave. real estate management firm called Beam Living and City Harvest. The pantry had its first distribution of food on April 29 for locals who can’t afford to pay for groceries. A volunteer wearing a Beam T-shirt was leaving the site and declined to be photographed.

A block up from Bruno’s store, the popular Summit Bar, at 133 Avenue C, known for its daily happy hours, is still open, even though owner Hamid Rashidzada had to limit business to “drinks to go,” according to a server. Hours are limited to Thursdays from 4 p.m. to 9 p.m. and Sundays from 2 p.m. to 9 p.m. Bartender Rafael Cussolin noted that the part-time business was good “when the weather is warm on days like this.” He acknowledged a slowdown during the first months of the lockdown.

Some business owners obviously believe New York has turned a corner this springtime. A Dunkin’ Donuts franchise reopened on Mon., May 4 (but not the adjacent Baskin Robbins), at 542 E. 14th St. Temporary hours are Monday through Friday 6 a.m. to 4 p.m.; and 6 a.m. to 9 p.m. Saturday and Sunday.

On Saturday,  a Target franchise on E. 14th St. had plenty of customers leaving the store and others standing in line patiently observing the 6-foot social distancing rules put in place by Governor Andrew Cuomo and Mayor Bill de Blasio. A huge Target truck rolled up at one point.

“People go to Target to get all sorts of things, including a some food on the cheap,” said Marty Williams, 66, a Stuyvesant Town resident.

He said neighborhood seniors had been distressed by the Associated supermarket’s closing, “but now they can get groceries for even less at the new Trader Joe’s” across the street.

He said word was that Morton Williams had considered moving into the E. 14th St. Associated space, but decided against it “once they heard Trader Joe’s was coming” to the neighborhood.

He smiled. It was a nice day in old New York.