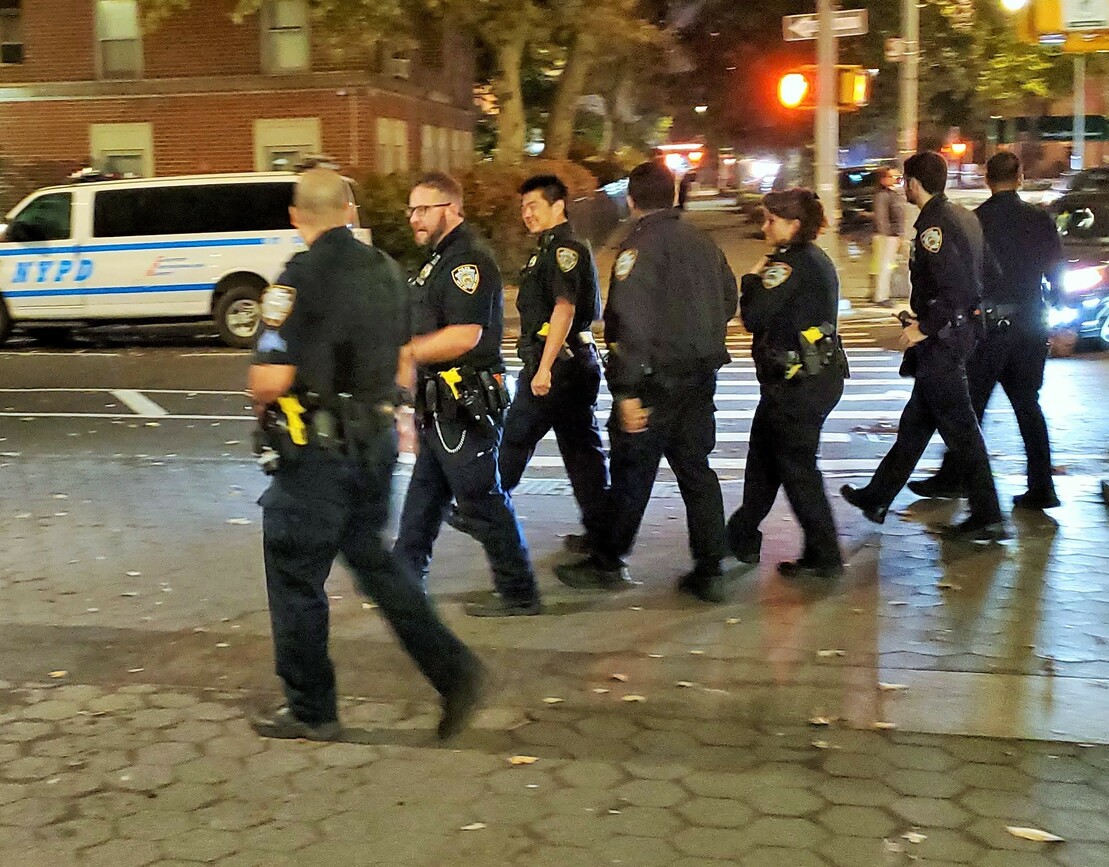 A group of police who had gathered at the arch headed to their assigned foot posts or patrols on the streets around Washington Square Park on the evening of Fri., Nov. 4. (Photo by The Village Sun)

BY THE VILLAGE SUN | If you’ve noticed a lot more police officers on the streets around Washington Square Park lately, particularly to the west of the park, you’re not imagining it.

In response to complaints about crime and quality-of-life issues spilling out of the park and into the surrounding area, police have added more officers — both on patrol and stationed at “foot posts” — in the area.

In early September, The Village Sun first reported how some local block associations — including W. Fourth Street and W. Ninth Street — had hired security guards for the summer due to the influx of crack smokers, injection-drug users and people using the stoops and streets as a toilet. In the case of the West 4th / Mac 6th Block Association, which covers the single block of W. Fourth Street west of the park, the guards were packing handguns, allegedly for their own safety against drug dealers.

Meanwhile, other nearby Greenwich Village block associations and residents groups — including on Washington Place, as well as several buildings around the MacDougal Alley mews — continue to pay for private security to patrol their streets throughout the year.

Around the time The Village Sun published its article about block associations hiring guards, local city councilmembers or their representatives, Sixth Precinct police and others did a walk-through of the park and the surroundings to assess the situation. Among the upshots has been the increased police presence.

In an e-mail on Oct. 21 to The Village Sun, Captain Stephen Spataro, the Sixth Precinct’s commanding officer, said there had been a “positive” response to the visibly increased police numbers.

“We’ve gotten a lot of positive feedback about the deployment in and around Washington Square Park, including W. Fourth Street,” he said. “We’ll continue to adjust the deployment in real time based on crime and quality-of-life conditions. We hope this deployment of additional officers continues as it’s been really effective.”

Furthermore, Spataro said that starting two days from then, the neighborhood would also begin seeing additional police stationed at designated foot posts — meaning the officers don’t patrol around a wide area but mainly stick to a certain spot.

“The neighborhood will also see additional foot posts in these areas manned by new officers assigned to [Patrol Borough] Manhattan South field training,” he said at that time, adding that the foot posts are “approximately a block in length.”

Last Friday night around 10:45 p.m., a large group of about two-dozen uniformed officers were mustering just north of the Washington Square Arch. They weren’t focused on the skateboarders loudly clacking and slamming their boards on the other side of the arch or the guys selling pre-rolled joints from small tables scattered around the fountain. Nor were they there to close the park at its midnight curfew.

Instead, a sergeant spoke a few words to the group, and then they all walked off to the west along Washington Square North toward their beats or foot posts.

The sergeant told The Village Sun there are two deployments like this daily, though he wasn’t sure how long it would last — or, as he put it, “every day and every night — for now.”

Brian Maloney, the head of the West 4th / Mac 6th Block Association, said having more cops on the street is a positive, as far as he’s concerned. But he noted he’s seeing some officers “simply walking by and not addressing these issues.”

“The police have been great,” he said. “The issue is they literally seem to have no power, really. They’re making arrests and [giving out] summons, but they’re right back on the street,” he said of alleged offenders.

Maloney sent The Village Sun a fresh photo of a homeless man camped out against the side of the building on the west side of Sixth Avenue between W. Fourth Street and Washington Place, which he said showed the man injecting himself at 10:30 a.m. He also sent a video of the same guy urinating against the building’s wall, as pedestrians either skipped over his urine trail or walked around it.

Popping wheelies in the park

The Village Sun also asked Captain Spataro a few weeks ago about groups of young guys riding bikes in Washington Square Park, after noticing some of them popping wheelies around the fountain and also provocatively doing so right behind a pair of officers who were circling the fountain on foot.

The newspaper asked the two patrolling officers about the trick cyclists, and they said to speak to the Greenwich Village precinct. The captain noted that police who have been detailed to the park are from other precincts.

“Unacceptable,” Spataro said of the brazen bike riders. “Unfortunately, the officers that are detailed here are not from the 6th Precinct, so they are not as engaged as our officers are. We will investigate this incident.”