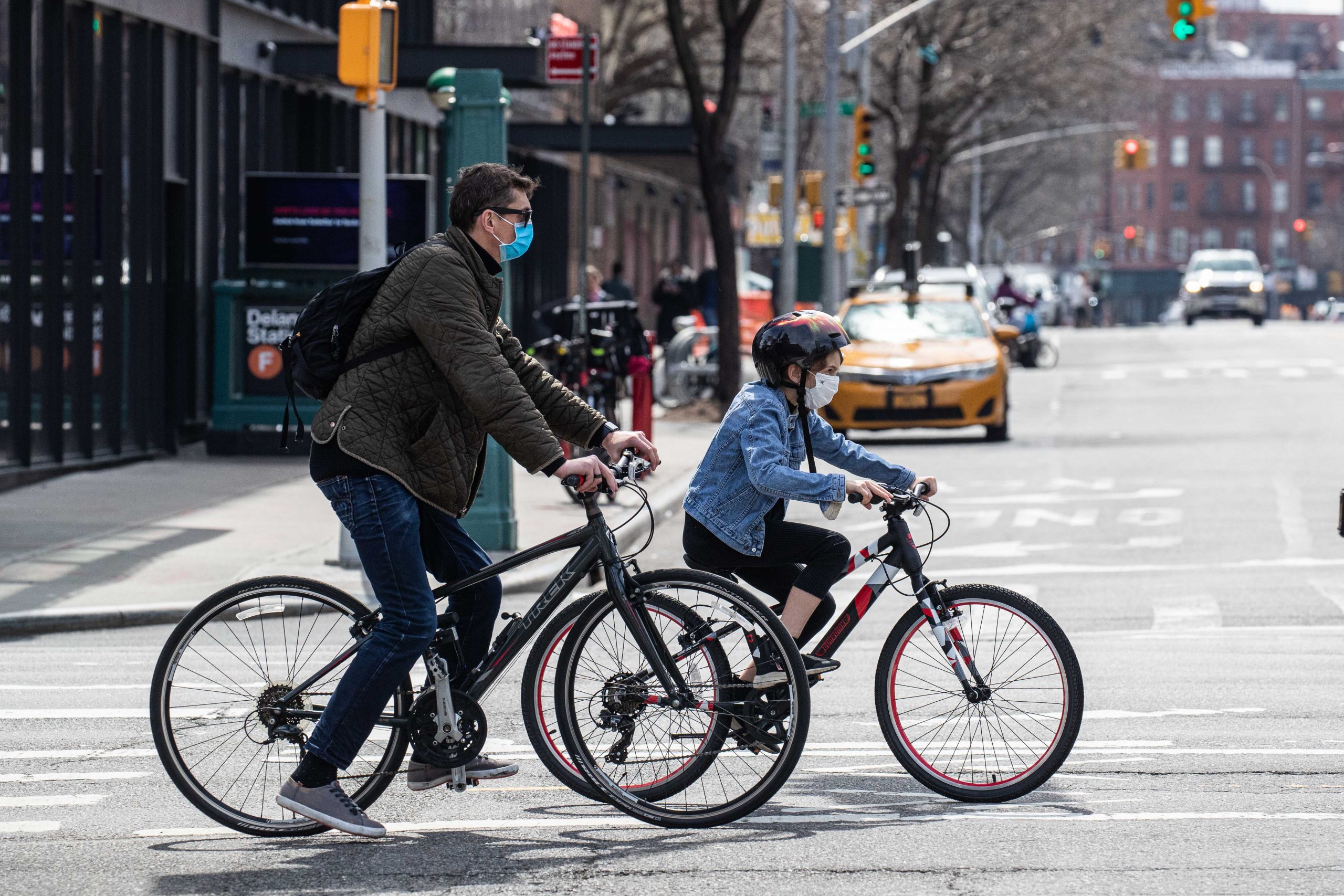 A father and son biking on the Lower East Side. (Photo by Isaac Rosenthal)

As the weather gets warmer and New York City’s fight against COVID-19 stretches into the summer, Council Speaker Corey Johnson and Mayor Bill de Blasio on Monday announced plans to implement at least 40 miles of street closures, sidewalk widening, and additional bike lanes over the next month — with a goal of implementing 100 miles, focusing on communities hardest hit by the pandemic.

De Blasio, initially, had resisted the Council’s call for creating open streets, saying that too much police manpower would be required to ensure the program’s safety. A smaller-scale open streets program, launched by the mayor, lasted less than two weeks before de Blasio ended it, citing the policing issues.

But Johnson, Rivera and Council advocates — along with Borough President Gale Brewer — argued that local community partners could help keep the order in the new open public spaces.

Also, as the mayor apparently was still demurring, on Sunday Johnson threatened to play hard ball — saying, if need be, he would seek Governor Cuomo’s help in banning cars from select city streets.

The so-called “early-action” bike lanes — apparently, bike lanes that were planned to be installed, though on a later time line — will be permanent.

“This summer is going to look different from any other in our city’s history — and we’re ready to give New Yorkers more ways to leave home while staying safe from COVID-19,” de Blasio said. “I’m proud to work with Speaker Johnson, the Department of Transportation, and the N.Y.P.D. to find creative solutions that support our broader goals of ending this pandemic and rebuilding a fairer city.”

“The Council is thrilled our calls for open streets have been answered and looks forward to working with the administration to give New Yorkers the space they need to socially distance properly,” Johnson said. “As the weather gets nicer and this unprecedented crisis stretches on longer, we need to do everything in our power to keep our neighbors safe and healthy. This announcement is a great starting point for the ongoing conversation about how we share our public spaces during this pandemic and in a post-coronavirus future.”

“I want to thank Mayor de Blasio, D.O.T. and the N.Y.P.D. for working with Speaker Johnson and me after our Friday hearing on an open streets plan that we can hit the ground running with this week,” Rivera said. “This initial span of 40 miles of open streets and the 100 eventual miles that will be created will provide the space for essential workers to pursue safer commuting options, provide outdoor opportunities for vulnerable New Yorkers, and give families the chance to play beyond the four walls of their home. This is just a first step, and once successfully implemented, I look forward to working further with the Mayor’s Office on open streets and other social distancing measures we can undertake to protect all communities and help keep COVID-19 rates low.”

Open streets will only be in effect for the duration of New York State on Pause, with the exception of bike lanes. Governor Cuomo has said the “pause” — the New York shutdown — will extend at least through May 15, after which some sectors of the economy may be allowed to reopen.

Conversations with communities and local stakeholders about the open-space plan will take place in the coming weeks.

In his daily press conference on Monday, de Blasio spoke at greater length about the open streets plan:

“Over the next month we will create a minimum of 40 miles of open streets… . But during this crisis, the goal is to get up to 100 miles of those open streets and the way we will do it, we’re going to focus first on streets in and around our parks.

“Some places will be able to expand sidewalks. Use the example of what we did over the holidays around Rockefeller Center, where you just open up the sidewalk space into the street more, but with the proper kind of barricades.

“Some streets will be more local areas that aren’t necessarily where you have a major attraction like a park, but they are places where we can safely open up some space and have it be enforced.

“And another important piece of this discussion is early-action bike lanes where we see an opportunity to do more with bike lanes — [we’ve] done some of that already in this crisis, we want to do more.

“So, the focus here will be to focus…where the need is greatest. So, so many communities that we already have identified have been very hard hit by COVID, we want to be particularly sensitive to implement these kinds of steps — working with the City Council, working with the Police Department, Transportation Department, Sanitation Department and Parks Department, figuring out all the right places we can do this, but first priority are the places hardest hit. And then of course, figuring out where they’ll have the biggest impact, where the most people are.”