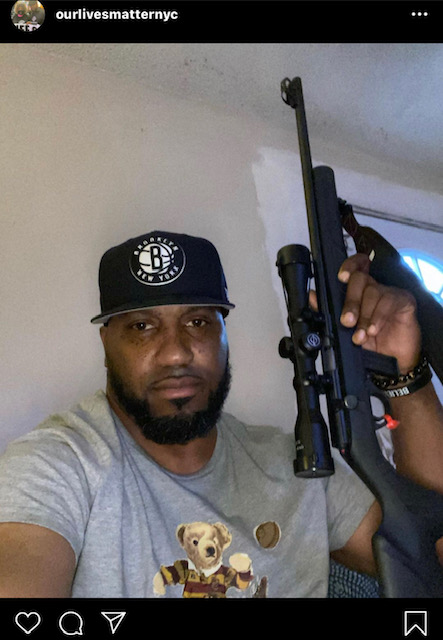 BY LINCOLN ANDERSON | Updated June 25, 5:00 p.m.: A man who was in the news recently for hurling racial slurs at an Asian police officer in Washington Square Park has been arrested on a gun charge and has been on the radar of the F.B.I.’s Joint Terrorism Task Force.

As police were closing the park one night earlier this month for its curfew, Shermaine Laster was videoed shouting “f—in’ chink” and “chink” at the officer nearly two dozen times.

“You’se a chink! Get outta here, you f—in’ chink!” Laster is seen yelling at the officer.

The cop has said he felt Laster was trying to provoke a response from him.

According to the U.S. Attorney’s Office for the Eastern District of New York, on Friday morning, F.B.I. agents arrested Laster of Brooklyn at Kennedy Airport, where he was boarding a flight to Miami. Laster was taken into custody on an arrest warrant charging him with being a convicted felon in possession of a weapon — a Nodak Spud rifle — in Texas.

He was convicted of a robbery in 1999 and on a gun charge in 2000. In October 2020, he reportedly traveled from Brooklyn to Dallas, where he visited a gun range, and used the rifle.

Starting last fall, Laster allegedly started posting photos of himself with firearms on an Instagram account, @ourlivesmatternyc.com. This caught the eye of the F.B.I.’s Joint Terrorism Task Force.

One post reportedly showed a photograph of multiple handguns on a red background, with the caption, “No games!!! Proud boys, KKK, skin heads, white supremacy I’m not playing absolutely NO GAMES with your kind!! I just wish MY ppl wake up and unify before it’s too late. (Black toys) good to fight in the dark!!”

Another post reportedly showed two photos of Laster, one holding an apparent assault rifle and one a handgun, at the Dallas firing range. The pictures were captioned, “Get ready ppl!!!! The WAR is coming!!! Brought my baby out and connected with big boy AK-47 AR-15 #stopsingingandstartswinging
#outlivesmatter #fight #war #black #revolution #itson #justice #free #equality.”

Laster, who is a cleaner for SUNY Downstate Health Sciences University, made his virtual initial appearance this afternoon in Brooklyn Federal Court, at which the government was seeking his detention. He would be prosecuted in Texas.

At the arraignment, the defense and prosecution argued over whether the evidence proved Laster had been in possession of firearms. A search warrant enacted at his home on Friday did not turn up guns. But the prosecutor said the U.S. attorney was in possession of additional photos showing Laster with them.

The judge expressed concern about Laster losing his job and noted that his earlier convictions were about 20 years ago and that people can change over such a long period of time. She requested that the U.S. attorney provide the additional photos.

After the prosecution presented 11 more photos of the defendant with firearms, the judge pronounced, “I cannot get past” the evidence.

“Your honor…” Laster started to say, but his defender quickly advised him to remain silent.

The judge agreed, counseling Laster that anything he said in court could be used against him. She issued a temporary order of detention against Laster and said the case would reconvene Monday.

The Daily News reported that Laster has been a regular presence at Black Lives Matter protests in the city.