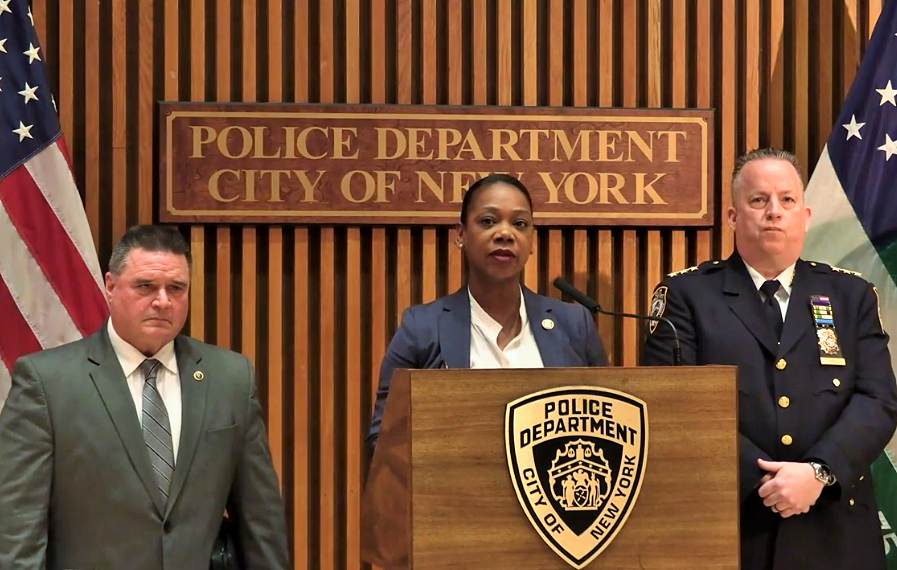 Police Commissioner Keechant Sewell praised the "greatest detectives in the world" for making an arrest in the deadly crime pattern. (NYPDNews / Twitter)

Man busted in Ave. A slaying was on ‘violent spree’: Cops

BY LINCOLN ANDERSON | Police on Monday announced an arrest of a man in a bloody, four-day Manhattan rampage that left two victims knifed to death — one in the East Village, one Uptown — and two others wounded.

Police Commissioner Keechant Sewell and top police brass made the announcement in a press conference at One Police Plaza. She praised the collar, calling it “a department-wide collaboration of intelligence, resources and skill.”

Roland Codrington, 35, of East Harlem was spotted by police and arrested in the Bronx on Christmas Eve and charged with two counts of murder, two counts of attempted murder, one count of assault and one count of criminal mischief. When he was caught, he was allegedly driving a black Mercedes Benz that belonged to one of his victims.

Codrington has a lengthy rap sheet, including arrests for knifepoint assaults and robbery and, according to the New York Post, has done time in prison.

Police said the bloodshed started on Mon., Dec. 19, around 1 a.m., after local resident James Cunningham, 51 — who lived nearby — stepped out of Spike’s bar, at 218 Avenue A, between 13th and 14th Streets and had just started walking south. Codrington randomly came up to him and they got into a dispute that lasted only 20 seconds before Codrington, according to cops, pulled out a knife and sliced the other man’s neck. There was no prior incident at the bar before the attack, according to witnesses and video.

Responding officers found Cunningham on the sidewalk in front of 214 Avenue A lying in a pool of blood with a 10-inch-long gash across his neck. He was taken to the hospital, where he was pronounced dead.

Police said a female, Codrington’s girlfriend, was with him at the time of the incident.

A bartender at Spike’s later that night told The Village Sun that he had been working at its sister bar across the street at the time of the murder, so had not seen the victim that night. He called Cunningham “a normal guy.”

The other two incidents in the pattern happened Uptown. On Thurs., Dec. 22, around 11:30 p.m., according to police, Codrington entered Teddy’s Bar, in East Harlem, bringing with him a pit bull and a baseball bat. He went behind the bar and assaulted the bartender. Two patrons tried to intervene, but Codrington reportedly pulled out a large knife and stabbed them, nonfatally. Again, Codrington’s girlfriend was there, too.

Police said the attacker felt he had been disrespected by the bar owner a week earlier when he had been asked to leave the place. Employees at the bar subsequently ID’d Codrington to police.

After leaving Teddy’s, Codrington reportedly saw a report of the attack on the Citizen app and went home. But around 2 a.m. Friday he decided to go to Marcus Garvey Park, about a 17-minute walk away, to “cool off.” There he wound up talking to Dr. Bruce Maurice Henry, 60, and for some reason he became “enraged,” police said. Codrington knifed the doctor to death, stabbing him numerous times, in the back, torso, buttocks, eye and palms.

As for why Henry was in the park at that time, James Essig, the Police Department’s chief of detectives, said, “Whatever reason he was in the park, he didn’t deserve what he got.”

Detectives checking video afterward saw a man and woman entering the doctor’s Mercedes Benz, which had been parked nearby. So now they were on the lookout for the vehicle.

Meanwhile, on Fri., Dec. 23, detectives at the East Village’s Ninth Precinct — through witnesses, video and computer work — independently identified the suspect in the Avenue A homicide as Codrington. Now police knew that the same guy was involved in both the East Village murder and the Teddy’s Bar assault.

According to Chief of Patrol John Chell, police put a “heavy deployment” plan into effect to catch the suspect, using all units, “aviation, transit, housing, everyone — all our assets.”

Finally, on Sat., Dec. 24, at 9:40 p.m., sharp-eyed police officers in the Bronx’s 30th Precinct spotted the black Benz and arrested Codrington. His girlfriend was in the car with him. She has not been charged with anything but is involved in the investigation.

Essig said police are looking into whether Codrington was involved in any other stabbings.