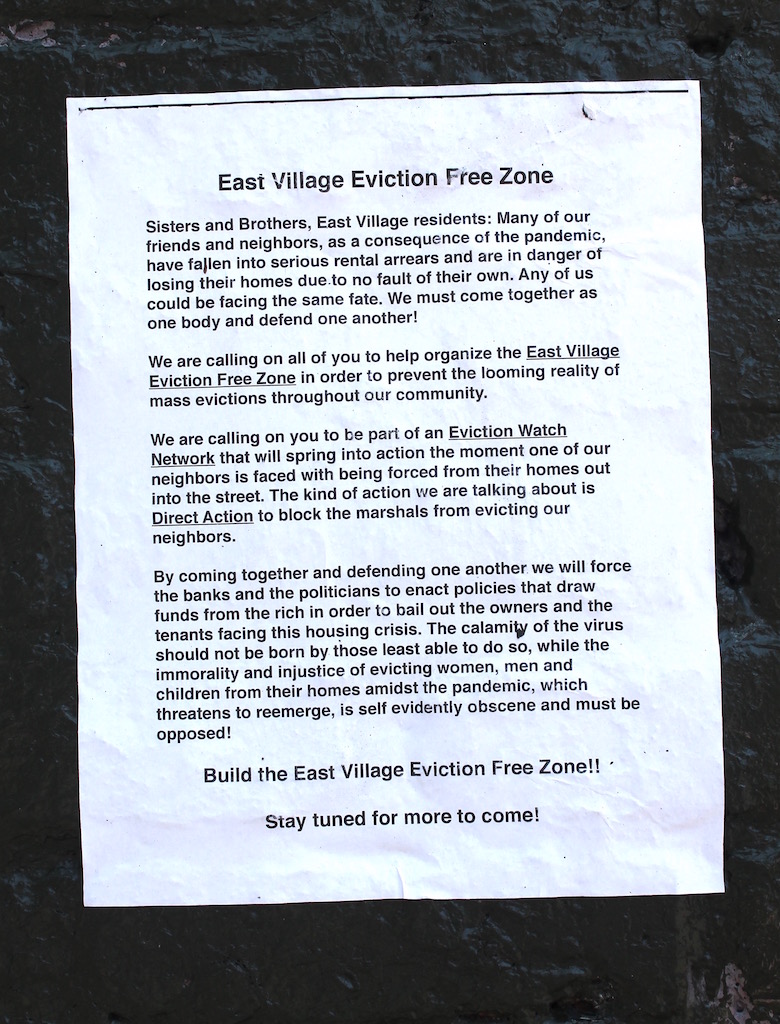 An activist group's fliers for the East Village Eviction Free Zone — like this one posted at the southwest corner of Tompkins Square Park — recently started appearing around the neighborhood. (Photo by The Village Sun)

BY FRANK MORALES | As John Lennon once said: “Strange days indeed.” And for tenants living through the pandemic, these are also days fraught with fear, fear of losing their homes due to their decreasing income, mounting rental arrears and the looming threat of eviction.

The situation is dire: Federal, state and local eviction moratoriums are about to or have already expired. The $600 weekly unemployment payments to nearly 30 million Americans who lost their jobs due to the pandemic ended last week, with no replacement or extension yet in place.

Meanwhile, another 1.2 million Americans filed for first-time unemployment benefits last week. As a result, according to a July 28, 2020, Forbes report, 40 percent of renter households in the U.S. are going to experience rental shortfall during the COVID-19 crisis, with just under 12 million facing eviction over the next four months alone. Around 17 million are likely to be impacted throughout the pandemic.

In New York State, nearly 50 percent of renters are dealing with rental shortfall and subsequently are facing potential eviction. Clearly, without a sustained federal intervention, there will be, as an NBC report put it recently, “a tsunami of evictions” along with a grievous spike in homelessness across the country. In fact, citing a Columbia University study, the NBC report stated that “homelessness could increase nationally by between 40 to 45 percent this year compared to January 2019.”

In New York City, where renters make up nearly two-thirds of the population, it is thus cause for concern that, even though the “pause on evictions” enacted by New York’s Office of Court Administration has just been extended by Governor Cuomo until September, the New York City Housing Courts will soon once again “open for business,” facilitating landlords in the five boroughs who are pushing new eviction cases forward.

To make matters worse, aside from facing eviction, tenants also face having to pay their rental arrears debt accrued over the past several months. The recently passed Tenant Safe Harbor Act, state legislation designed to ameliorate some of the problems facing tenants, does not cancel rent payments — and yet, paying rent may not be feasible for many New Yorkers who recently lost work. So what does this mean and what can we do about it?

Well, here in the East Village, where 82 percent of the available housing stock, some 33,000 units, are rentals, former squatter activists and others have recently come together to strategize and organize the East Village Eviction Free Zone. With hundreds if not thousands of East Villagers facing possible eviction, these activists are advocating a “horizontal” grassroots approach designed to defend our neighbors and keep people in their homes while protecting the integrity of our community and preventing further gentrification.

A recent notice from the group addresses the matter in the following manner:

“Many of our friends and neighbors, as a consequence of the pandemic, have fallen into serious rental arrears and are in danger of losing their homes due to no fault of their own. Any of us could be facing the same fate. We must come together as one body and defend one another!

“We are calling on all of you to help organize the East Village Eviction Free Zone in order to prevent the looming reality of mass evictions throughout our community. We are calling on you to be part of an Eviction Watch Network that will spring into action the moment one of our neighbors is faced with being forced from their homes out into the street. The kind of action we are talking about is Direct Action to block the marshals from evicting our neighbors.

“By coming together and defending one another, we will force the banks and the politicians to enact policies that draw funds from the rich, in order to bail out the owners and the tenants facing this housing crisis. The calamity of the virus should not be borne by those least able to do so, while the immorality and injustice of evicting women, men and children from their homes amidst the pandemic, which threatens to reemerge, is self-evidently obscene and must be opposed!”

In essence, the group, drawing on past lessons of anti-eviction defense strategies utilized by the squatter movement of the ’80’s and ’90s, is advocating for the creation of an anti-eviction network, a communications network of East Village residents pledged to join in a collective effort to defend those facing eviction, and to do so through various means, including blocking the access of marshals tasked with evicting East Villagers.

The activists believe that through the creation of a neighborhood-wide “rapid deployment force” of East Village neighbors, some trained in the tactics of nonviolent civil disobedience, they can create the conditions, the “heat on the street,” that will force the powers that be to meet the challenges of the moment — forcing the subsidizing of both tenants and owners in such a manner so as to prevent the unjust displacement of East Village residents during this time of crisis, while stemming the growing number of homeless people and the further gentrifying of our community.

As one of the activists recently pointed out: “With crisis comes opportunity, the opportunity for neighbors to support one another, and who knows, maybe even to come up with more cooperative ways of dealing with housing and community development, with the goal of placing people before profits.”

The group is planning a series of public meetings and events in the coming weeks with the aim of organizing an anti-eviction, community self-defense movement, calling on all East Villagers to “Build the East Village Eviction Free Zone!”