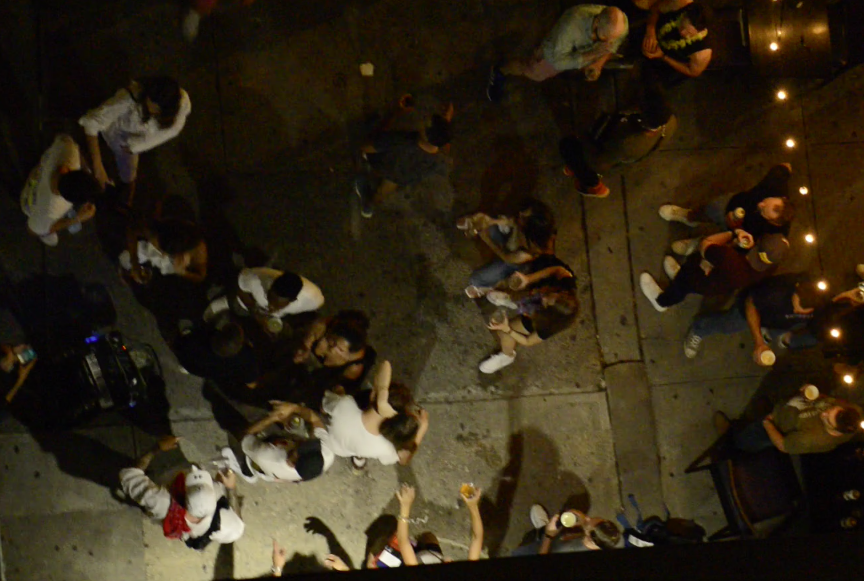 BY THE VILLAGE SUN | This dance party probably would not get the seal of approval of Dr. Fauci or Governor Cuomo.

Soho resident Harry Pincus reports that thousands of demonstrators on bicycles passed through the neighborhood on Saturday, up Sixth Ave., then — against traffic — down Sixth Ave. and up Varick St.

Around 1 a.m., the ride seemed to be on its last legs as police vans with lights flashing had started to follow them.

But, then, just as the cyclists were clearing out, a raucous dance party suddenly erupted on the sidewalk outside The Woo, a Korean restaurant at 206B Spring St., near Sixth Ave. The merriment, some of which Pincus captured on video, lasted for about a half hour.

Soho dance party outside the Woo, at Spring St. and Sixth Ave. Probably would not get Dr. Fauci and Gov. Cuomo’s seal of approval. pic.twitter.com/q1FxHWnjcK

“No one can possibly think that setting up a loud speaker after 1 o’clock in the morning and blaring it all over the neighborhoods is an act of community,” Pincus said. “These people were expensively dressed, they had spent a lot of money in the restaurant, and they were going to plant their flag on our block no matter how hostile that might have seemed. They did what they did because they could, and they had the money to be here.

“The group last night doesn’t live here, but they don’t think they have to, because they have MONEY. Imagine going to someone else’s neighborhood, en masse, and doing that?

“So all day long, we had demonstrations to defund or demolish the police. … Emma Goldman’s shredded banner of ‘If I can’t dance, you can keep your revolution’ is now replaced with a plastic credit card,” he lamented.