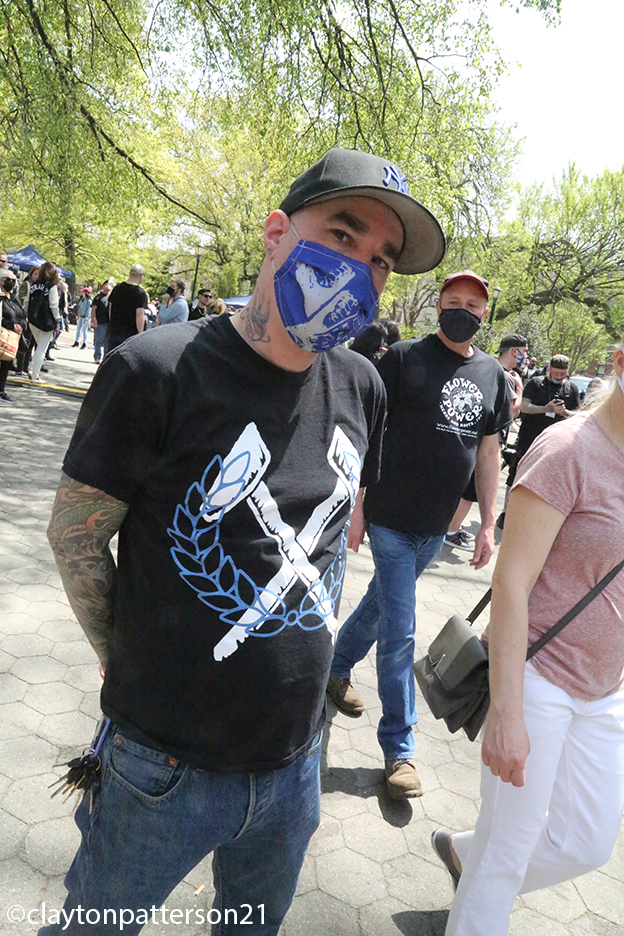 Sid at the Tompkins Square hardcore concert on May 11. (Photo by Clayton Patterson)

Let’s move on: No one was to blame for Tompkins Square hardcore concert

BY CLAYTON PATTERSON | When Phil Mickelson won the PGA championship on May 23, thousands of golf fans mobbed him. It looked like a huge mosh pit for khaki-wearing Republicans. Very few masks, no social distancing. A month earlier, more than 2,000 fans of hardcore music had a mosh pit of their own as they enjoyed a Saturday afternoon concert by Madball, Bloodclot, Murphy’s Law and the Capturers in Tompkins Square Park. Again, very few masks, no social distancing.

Did the PGA lose its ability to hold future tournaments because it lost control of golf fans that day? Of course not. But the New York City Parks Department revoked permits for future concerts held by the organizers of the Tompkins concert. Maybe there wasn’t enough khaki in the park.

Who is to blame for too many people showing up at a music festival in a public park? The government, the promoters, the performers? Who is responsible for the head count, the government or the promoters? Government authorities who were overseeing the event were the police and the Parks Department.

Jaime Hernandez was there from the N.Y.P.D. He is a Ninth Precinct community affairs detective. He has been with the N.Y.P.D. for more than 25 years. During those 25 years, I have photographed Detective Hernandez in all kinds of emergencies, evictions, crime scenes, protests, funerals, marches, celebrations. Almost every kind of situation where one would expect to find a community affairs cop.

He was there at the beginning of the concert. He is not an excitement junkie. He is calm in times of trouble. He knows what to do if a dangerous or potentially explosive situation arises. The police did not shut down the show. What does that tell us about how “dangerous” Detective Hernandez thought the event was?

I know the people who organized and performed at the concert. Chris Flash founded The Shadow, an  independent political newspaper started in 1989. It’s one of the only independent Downtown newspapers still published. He runs his own delivery business, has been doing Tompkins Square Park concerts for a number of years, does much to support his community.

I have known John Joseph of the Cro-Mags for more than 35 years, witnessed him doing years of service for the Lower East Side Hare Krishna movement.

I first met James Drescher probably in 1987, working the door at the Pyramid Club with RayBeez (R.I.P.). He’s a part owner of Hardcore Tattoo, a specialist woodworker. John and Jimmy have contributed their talent and money to so many benefits.

Joseph Cammarata runs the Black N’ Blue show at Webster Hall. A family man with two small boys, he  also has done a number of benefits.

I have documented all these men in a number of different circumstances. If  I was asked on a witness stand to give a personal reflection on them, I would without question stand behind them as moral, ethical, honest, not alcohol- or drug-addicted, functional, the kind of people I respect as good community people.

Who was to blame for the concert’s potentially dangerous threat to our health? I would say, nobody. It was just an abnormal situation that seemed like it needed to happen. A storm broke. People have been in lockdown for more than a year. Cabin fever, rent owed, businesses closed, jobs lost, suicides, friends and acquaintances dead. You could not visit the one you loved. Could not visit people in nursing homes and hospitals. Could not visit doctors. I could not visit a doctor for several months. Could not start my treatment. We were all under a tremendous amount of pressure. People were pent up. Some got squirrely, some bordering on madness, others just needed to feel the first new taste of freedom.

So for this day of wild exuberance there is no one to blame. This was the opening up of an emotional pressure value. This must have been what it was like on VJ Day, the sailor kissing that woman in Times Square.

Who had the authority to throw people out of the park? Who is the expert to determine if the health conditions were safe or not? Even the governor has made serious blunders, leading to many people in nursing homes dying. There was no riot. There were no arrests, no ambulances. How would Detective Hernandez know if it was dangerous? How would the concert organizers?  Should the government have had a medical expert there?

We live in a democracy. Freedom does come with a price. We are responsible to ourselves and to one another. I know John Joseph and Chris Flash do not believe in wearing masks. I believe in wearing a mask. We are good with each having his own opinion. I am going to be 73. I’m dealing with cancer, and the medication kicks the air out of me. Slows me down. For the moment I am more vulnerable than I would normally be. I still do street photography. Still in the hunt.

Elsa is going on 77 and is also in a weakened state. If, in the end, it turns out the masks were not needed, I would not take a chance to compromise her.

I did not stay for the larger show that afternoon. I would have been very tempted to get in on the action. I love that excitement. Over the years photographing and videoing on the street, I have gotten broken bones, torn ligaments, had teeth knocked out, been knocked unconscious, and the old body is feeling the effects of all that ill treatment. I’m giving it a rest. I came because I wanted to show support, but did not want to be in the middle of any large crowd, so I left. My choice. I would have left the PGA event, as well.

Let’s move on. Stop the name-calling, the negative innuendos. We have suffered enough. Causing pain does not solve the problem. It is wrong to try and damage good people. My bet is after the concert was over, many felt mentally and physically better off than the day before. A lot of steam, aggression, internal pain and madness were released. Let’s hope nobody got sick. Think of all the photos I missed.