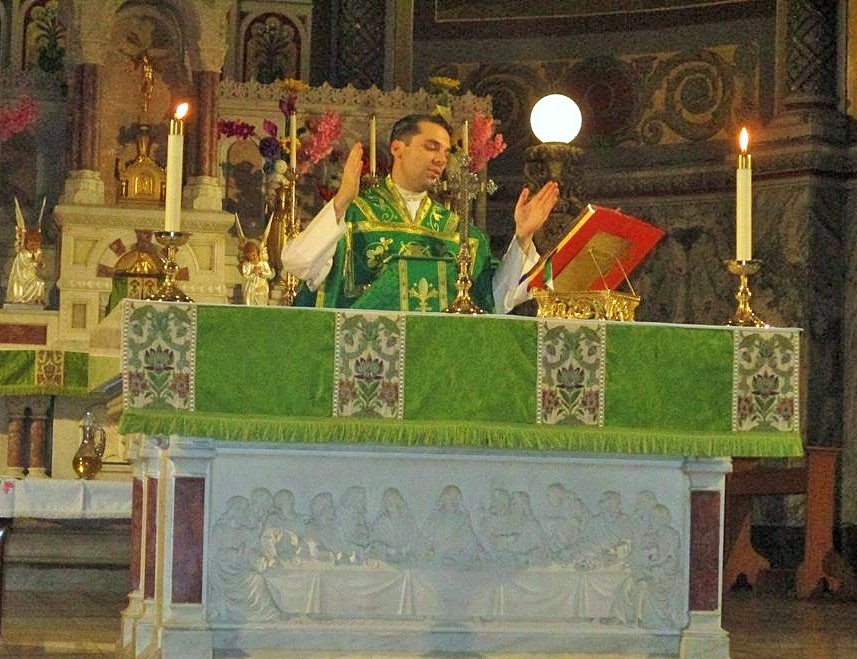 Reverend Father Sean Connolly, administrator/pastor of Most Holy Redeemer - Nativity, celebrates a modern, bilingual Mass in English and Spanish. He says he got permission from the New York Archdiocese to offer a series of five Saturday Latin Masses that Pope Francis seeks to limit. (Photo by Mary Reinholz)

BY MARY REINHOLZ | The Reverend Father Sean Connolly  faced about 30 parishioners from behind a free-standing altar at the Church of the Most Holy Redeemer and Nativity. It was noon on a hot summer day as Connolly, resplendent in a green cassock, began celebrating a modern bilingual Mass in English and Spanish.

The faithful joined him in prayers and in singing hymns like “Ave Maria,” several holding rosary beads. Connolly washed the feet of a disabled elderly woman in a front pew, moments before offering her a consecrated communion wafer.

Three days later, at noon on Aug. 6, the Reverend Father Alessandro da Luz, a visiting priest from the Long Island Diocese of Rockville Centre, celebrated the controversial Latin Mass at Holy Redeemer. It was one in a series of five Masses that will be conducted — for a second year — on the first Saturday of each month at the soaring baroque edifice in the East Village.

This ancient Mass drew about 150 people, many Latino. Da Luz stood at the high altar, facing the tabernacle as he murmured prayers in Latin. An altar server rang a communion bell when he elevated the host. A church choir sang in Latin, as well.

Da Luz, who also released incense, repeatedly called out to congregants, “Dominus Vobiscum” — meaning “The Lord is with you” in English — words from traditional Latin Masses that were codified from earlier liturgies by the Council of Trent (1545-1563) and used in the Roman Missal from 1570 up until the Second Vatican Council of 1963-65 (a.k.a. Vatican II), which ushered in new Masses in the vernacular.

Often called the Tridentine Mass or the “extraordinary form,” the Latin Mass has been threatened with total extinction ever since Vatican II, notably last summer when Pope Francis reversed a 2007 ruling from his still-living predecessor, Pope Benedict XVI, who had relaxed restrictions on the old rite, allowing it to  flourish.

Francis, in an apostolic letter titled “Traditionis Custodes,” called on bishops around the world to reimpose restrictions on the Latin Mass in their parishes, claiming it had created division in the church spurred by people opposed to the reforms of Vatican II.

The new law requires celebrants of the Latin Mass to obtain signed permission from local bishops; to practice in nonparish churches; and to express fealty to the reforms in liturgy defined by Vatican II.

Connolly, who is on his first pastoral assignment at Holy Redeemer, said he obtained permission last year to celebrate the Latin Mass from the New York Archdiocese.

“I think the Latin Mass gives you a real sense of the sacred, and of the purpose of the Mass,” he said in a telephone conversation.

It’s still unclear whether he will be allowed to continue to offer the old rite after the current series concludes in December. The church bulletin doesn’t even describe the series as Latin Masses.

Cardinal Timothy M. Dolan, New York’s archbishop, is still evaluating his response to Francis’s letter from July 16, 2021, according to Joseph Zwilling, a spokesperson for the archdiocese.

“The matter is still under review and [Dolan] has not taken action as yet,” Zwilling told this reporter, adding, “The New York Archdiocese is happy to be in compliance with The Holy Father’s wishes and is studying the best way to do that before we issue any guidelines for this archdiocese.”

Zwilling noted that there were people with “passionate views” on both sides of the debate. Indeed, one skirmish in the so-called “worship wars” featured advocates for the “timeless” Mass booing liberal Chicago Cardinal Blase Cupich, who has banned the Latin rite from being said in parishes at Christmas, Easter and other other feast days.

Francis’s efforts to suppress the Latin Mass have caused “confusion” and distress at Holy Redeemer, said a parishioner in his 30s who identified himself only as Matthew, noting that the venerable rite has drawn younger Catholics of his generation.

Matthew was one of the altar servers at the Latin Mass conducted by Father da Luz at Holy Redeemer.

The bearded priest said, “I don’t know,” when asked why Francis was cracking down on Latin Masses. “I wish I knew,” da Luz added, noting Latin Masses are “well attended” in his Rockville Centre diocese, a Latin Mass ecclesiastical territory of the Catholic Church.

In contrast, Cardinal Wilton Gregory, the Washington, D.C., archbishop, last month banned the Latin Mass outright at Catholic parishes in compliance with Francis’s 2021 decree, allowing it to be celebrated only in three nonparish churches in his archdiocese starting on Sept. 22.

The New York Archdiocese could not provide a list of Roman Catholic parishes offering the Latin Mass in the city. It appears that only one, the Shrine and Parish Church of The Holy Innocents, at 128 W. 37th St., conducts Latin Masses exclusively, seven days a week. Its pastor, the Reverend Father James L.P. Miara, did not respond to an e-mail requesting additional information and was unavailable for comment.

A 24-year-old immigrant factory worker from Williamsburg, who  called himself Red, said he regularly attended Latin Masses at Holy Innocents and enthusiastically praised the rite celebrated by Father da Luz at Holy Redeemer.

“It was inspiring, uplifting, bringing all that history back,” he said. “It was like going into another world, and to a Mass that the apostles celebrated.” He claimed Vatican II reforms had made some contemporary Catholic Masses more like “Protestant” worship.

Dorothy Day, the Christian anarchist and co-founder of the left-leaning Catholic Worker movement — who is now being considered for sainthood in Rome — reportedly loved the Latin Mass. So did many famous writers, intellectuals and scholars, Catholic and non-Catholic from the last century. Among them were famed British crime writer Dame Agatha Christie, who joined in petitioning the Holy See to keep the rite more than 50 years ago, saying it had inspired priceless works of art and literature.

The Reverend Father James Cascione is a former parochial vicar at Holy Redeemer and a member of the Redemptorist priests, a missionary order that founded the parish for German-speaking immigrants in 1841. He said he likes “both rituals” and finds it “difficult to understand” Pope Francis’s strict limits on the Latin rite. However, Cascione doesn’t believe Francis has “created division. That comes from the traditional people who are feeling alienated right now,” he said.

The 64-year-old priest, now living in a Pennsylvania Redemptorist care facility after suffering a stroke more than a year ago, also noted that Francis could have completely banned the Latin Mass, but didn’t.

“The pope could theoretically mandate and totally wipe out the Latin Mass, but popes usually don’t go that far,” he said. “[Francis] would get resistance from bishops who don’t like the Latin Mass but tolerate it. He could ban it, but it’s not worth the trouble.”