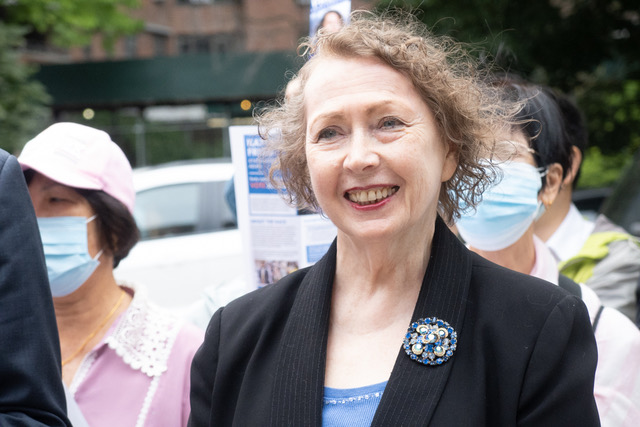 Kathryn Freed was endorsed on June 16 by the Coalition to Protect Chinatown and the Lower East Side. (Photo by Pat Arnow)

Kathryn Freed, tired of politicians ‘not listening,’ is running for State Committee

BY LINCOLN ANDERSON | She’s mad as hell and she’s not going to take it anymore — so she’s running for elected office.

State committeemember is an unpaid party position. Members typically work to shape Democratic Party policy at the state level. However, if elected, Freed also plans to use the position as a platform to advocate on local issues that she feels have not received proper representation from the current crop of area politicians — whom she scoffs are “lame.”

After being term-limited out of the City Council, Freed served as a judge from 2004 to 2021. Since recently retiring from the bench — after former Governor Cuomo forced out veteran judges as a cost-cutting measure — Freed has plunged back into the kind of local issues that were her bread and butter when she was known as a hard-working councilmember representing Lower Manhattan from 1992 to 2001.

Freed formerly lived in Soho but now lives on the Lower East Side in the Grand Street Co-ops at the east end of Grand Street.

“There are a couple of reasons” why she’s running, she told The Village Sun. “I got very involved in fighting the Soho/Noho/Chinatown upzoning — which was sponsored by [former Councilmember] Margaret Chin and [current Councilmember] Carlina Rivera. I was very upset with the lack of listening to the community.

“And then I got very involved with East River Park — right now 30 acres of it is a wasteland,” she said. “That was also sponsored by Margaret Chin, though it was in Carlina’s district. We couldn’t get the state officials involved [in fighting the plan]. My feeling was the elected officials were not listening to the community. Just the lack of listening by the elected officials to the community, I found that very frustrating.”

Freed, who is a lawyer — obviously, since she was a judge — teamed up with activist Village attorney Arthur Schwartz on a lawsuit to try to stop the East Side Coastal Resiliency project from razing East River Park, but the legal challenge was ultimately defeated.

Meanwhile, her opponent Low works full time for the City Council speaker and also is a newly appointed commissioner on the city’s Board of Elections. Low chose not to run for reelection as a Democratic district leader last year since she was also running for City Council in District 1 in a primary race that was ultimately won by Christopher Marte.

“How can you not have a conflict as a state committeemember if you work for the City Council speaker?” Freed asked. “She’s very much an insider in the politics — she’s got two political jobs. She’s very  much a part of the machine and machine politics.”

In short, Freed said what she’s running against is “the same old machine politics and we need to change. I will be independent and I will ruffle feathers — as I always do,” she said with a laugh.

If elected, she plans to join the State Committee’s Progressive Caucus.

“I think it’s time for a shakeup in Albany. There’s a lot that goes on behind closed doors,” she said, noting that the State Committee does give funding to candidates, “but it’s not transparent.”

Freed has stood shoulder to shoulder with Lower Manhattan activists on fighting the construction of the Chinatown “megajail,” as well. Low, on the other hand, has been harder to pin down on the jail issue.

“She doesn’t oppose it, let’s put it that way,” Freed said.

“I don’t think people are aware of what’s going on in Chinatown,” Freed said. “More and more businesses keep going out of business. And the jail will disrupt the heart of Chinatown and also Little Italy. Asians now have the highest food insecurity in New York of any group.

“COVID, the jail, anti-Asian hate, shelters, Christina Yuna Lee’s murder,” Freed said, “it all combines in a really nasty witches’ brew — I hate to say that because everyone’s using that [expression] lately.”

It’s not surprising, then, that she recently won the endorsement of the Coalition to Protect Chinatown and the Lower East Side. The group endorsed her two days before the start of early voting, which began June 18 and runs through June 26, followed by primary election day on Tues., June 28.

Zishun Ning, an organizer with the coalition, said of Freed, “She has a track record of supporting workers and communities against displacement and luxury high-rises. She opposes the sale of Knickerbocker Village, advises on the current lawsuit to stop the Two Bridges luxury towers, and supports the Chinatown Working Group Rezoning Plan to limit real estate speculation and guarantee truly affordable housing for Chinatown and the Lower East Side.

“She’s also vocal against the homecare agencies and insurance companies forcing home attendants — the majority of whom are women of color — to work 24-hour workdays,” Ning added. “Unlike Kathryn, her opponent, Jenny Low, was the board president of the Chinese-American Planning Council (C.P.C.), the leading agency that forces home attendants to work 24-hour workdays. C.P.C. is also helping a developer build a luxury high-rise in the Lower East Side. Obviously, Jenny Low represents the interest of sweatshop bosses and big developers. Therefore, we need to elect Kathryn, so that she can represent the interest of the community in the State Committee.”

In addition to the Coalition to Protect Chinatown and the Lower East Side, Freed has also been endorsed by four local Democratic political clubs, inncluding the Grand Street Democrats.

“I’m supporting Kathryn not just because she’s been my downstairs neighbor for 16 years,” she said. “When she retired as a judge, I found out how brilliant and incisive she is. She got involved with East River Park activism; she read everything [about the park and E.S.C.R.] and became an advocate. Her positions on development and other issues in the neighborhood are what we need to hear. She’d be great for our neighborhood in Democratic Party leadership.”