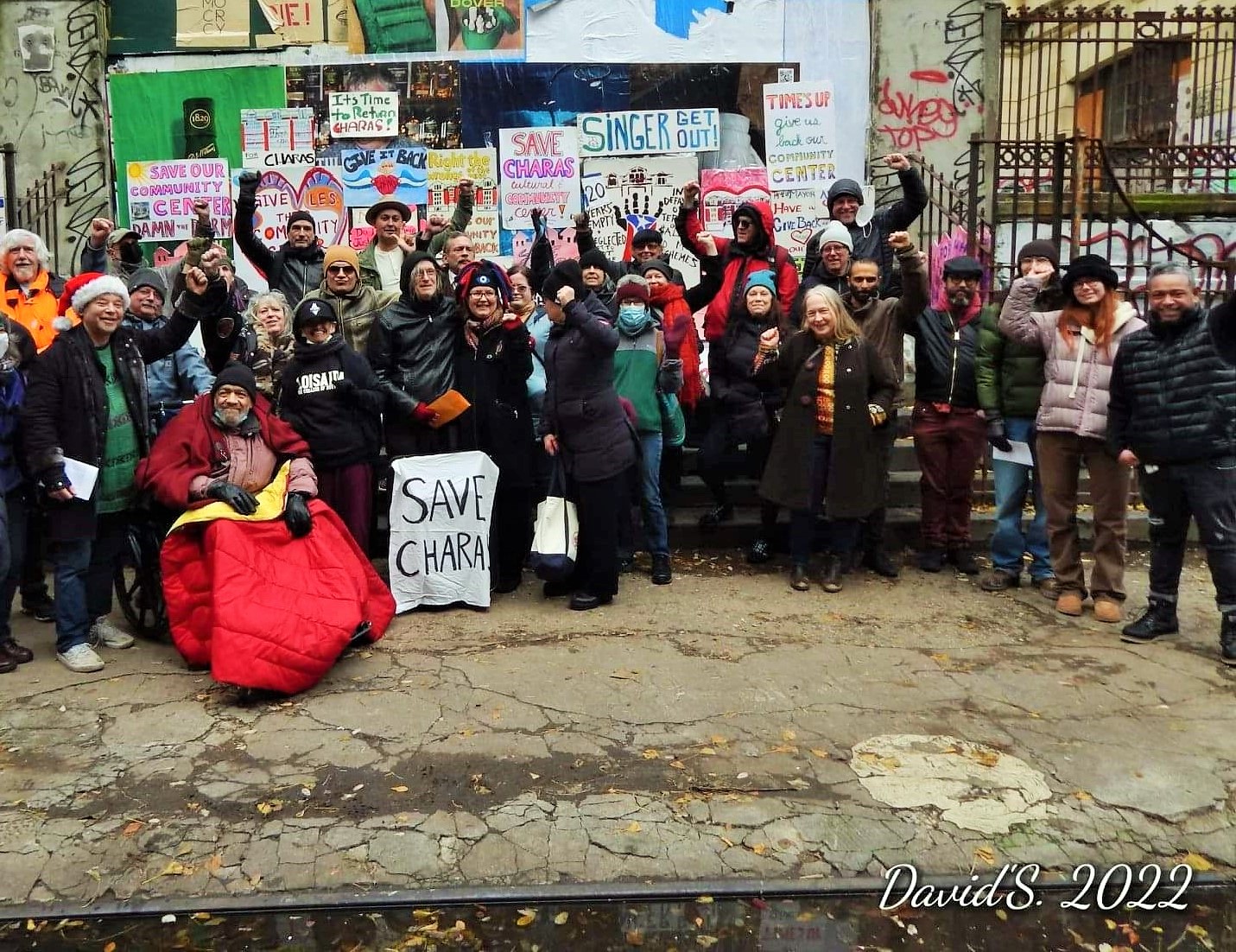 Carlos "Chino" Garcia, at left, and supporters rallied in December to restore the old P.S. 64 as a cultural and community center. (Photo by David Sanders)

BY LINCOLN ANDERSON | Supporters of CHARAS El Bohio rallied outside the old P.S. 64 on Dec. 17 to mark the 21st anniversary of the Puerto Rican-led group’s eviction from the historic and now long-vacant building.

The old school, which straddles the block from Ninth Street to 10th Street east of Avenue B, has sat empty since developer Gregg Singer — who purchased it for $3.2 million in 1998 — kicked out CHARAS at the end of 2001. However, community activists, local politicians and City Hall have frustrated Singer’s various schemes to redevelop the structure, most recently as a university dorm. The property carries a “community use” deed restriction that bars residential use, for which a zoning change would be needed.

In huge news for CHARAS supporters, who want the building restored as a community center, five days after the rally, a judge ordered the foreclosure and sale of the property. The property, which is valued at upward of $100 million, must be sold within 90 days. It’s unclear, however, if Singer will try to appeal the order.

“We are excited to finally have the opportunity to return the building to full community use, and are ready to work with Mayor Adams to restore this once vibrant community hub,” said Carlos “Chino” Garcia, a co-founder of CHARAS.

“After 25 long years, Greg Singer has finally been forced to relinquish control of the beloved former P.S. 64/CHARAS El Bohio Community Center,” said Andrew Berman, executive director of Village Preservation. “One critical piece of the great wrong done by former Mayor Giuliani at this site so near and dear to the heart of the East Village has finally been righted. … Now the current administration needs to undo the final wrong and reacquire this building to return it for once and for all to the community use it served for so many years when CHARAS El Bohio was located and flourished here. This is a unique and fleeting opportunity, and Mayor Adams must seize it now.”

Also, a lawsuit Singer filed five years ago — claiming his efforts were being thwarted by a “conspiracy” of the mayor, local politicians, Village Preservation and dozens of activists — recently lost on its final appeal. However, according to Susan Howard of Save Our CHARAS Community Center / P.S. 64 (SOCCC-64), despite the building now being in foreclosure, Singer merely has filed another lawsuit.

Regarding Singer’s repsonse to the judge’s forced-sale ruling, Howard told The Village Sun, “Yes, he can try an appeal of the judge’s order.”

As for how the auction would work — whether it would simply be a matter of the highest bidder winning the property — Howard said she didn’t have a clear answer on that.

“I can say we have met with city represenatives and they are committed to working with us,” she said.

Speaking days before the big news, CHARAS leader Garcia gave remarks at the spirited Dec. 17 gathering, saying, “I hope there’s still hope to get this building back. I’m glad that the community is still fighting to redevelop this building, to develop us as a community. We’re gonna try to figure out a way to bring it back.”

Juan Rivero, Village Preservation’s East Village director, declared, “I call on the mayor to make this the last such event we have — because I want next year’s event to be in there!”

However, the event’s emcee, Anthony Feliciano, a Democratic State Committee member, ominously noted, “Let’s be very real. There are other forces against us — not just Singer, but real estate interests.”

Vit Horejs, the director of the Czechoslovak-American Marionette Theatre, recalled how he came to the East Village in 1979 “looking for an affordable neighborhood.” He found a cheap performance space inside the old P.S. 64.

“I had my puppet theater in here,” he recalled, “puppets that were 100 years old, 200 years old. We were kicked out to DUMBO, paid three times as much for a minimal space without windows. … The puppets want to come back.”

“What CHARAS gave all people who lived here was hope, a dream,” she said, “to care for each other, to support each other.”

Crystal Field, the director of Theater for the New City, couldn’t make it in person but made a voice recording, which was played aloud at the event. While TNC is on First Avenue, a theater is also needed east of Avenue B to cover that part of the East Village, she stressed.

“It had a theater and beautiful art galleries, and local playwrights were presented there and audiences were larger,” Field recalled of CHARAS/El Bohio’s heyday. “You really need a community and arts center way east. … The neighborhood wants it. It never forgets.”

After gathering for group photos in front of the building — the shots with raised fists were everyone’s favorites — people reconvened at Piragua gallery on E. 10th St. — across from the other side of the old school — which some have dubbed “mini CHARAS.”

At Piragua, there was conga drumming and hips swaying as Angie Martinez — the mother of the gallery’s owner, David Soto a.k.a. DASO — and Elizabeth Ruf salsa danced to the beat. Hot pizzas arrived courtesy of Two Boots on Avenue A.

Frank Morales, a co-leader of Guardians of Loisaida (formerly Guardians of CHARAS) came in and shook hands with Valerio Orselli. Orselli is advocating for affordable housing to be built at two East Village sites, one the Ninth Precinct’s E. Fifth Street parking lot, and Morales asked how the effort was going. Though the two did not see eye to eye over the direct-action Guardians recently getting involved in trying to reclaim the former old P.S. 64 as a community center, at the Piragua community space they appeared allies.

After a while, everyone crossed the street and gathered outside the old P.S. 64’s E. 10th Street side for the dedication of a new multi-artist mural organized by Thrive Collective’s Jeremi Del Rio and DASO, with the support of Frank Gonzalez of Loisaida CommUnity Concerns and others. The mural is dedicated to CHARAS’s founders — Chino Garcia, Humberto Crespo, Angelo Gonzales, Ray Battiste and Sal Becker: CHARAS is an acronym of the first initials of all of their first names.

In another benefit of the mural, a light fixture that had been out at the spot has been repaired, thanks to electrician Ray Sage — husband of Wendy Brawer of GreenMaps — making the street safer at night.

Pastor Rick Del Rio a.k.a. “the Harley-Davidson minister,” Jeremi’s father, said a blessing before the ribbon-cutting.

“I pray blessings on this mural,” he said. “Keep it from being all marked up.”

DASO noted that, as a kid, CHARAS was “a safe space” for him. Angie Hernandez, who is considered an unofficial founder of CHARAS / El Bohio, is prominently pictured in the mural. DASO said he loves coming out of the gallery and being greeted by her portrait.

“Back in the day, we were young and we were doin’ it, right Chino?” Martinez said to Garcia. “I lived there!” she said of the old P.S.64.

“All the artists that came up over the decades,” DASO said, “we need a place like this.”