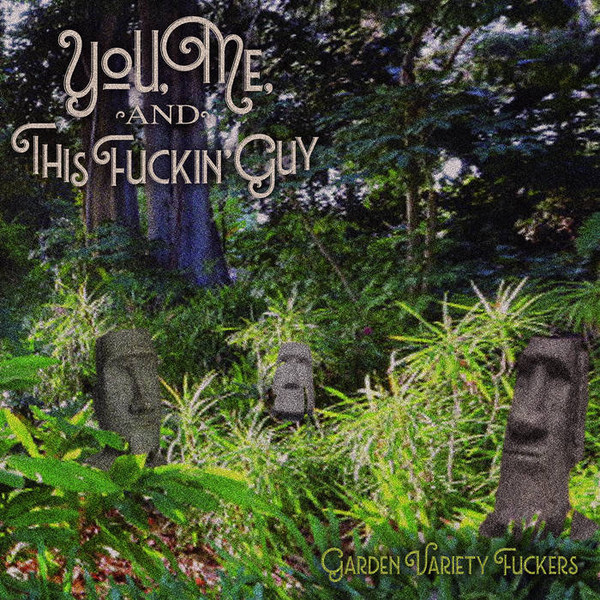 John S. Hall, joined by bandmates Azalia Snail and Dan West, has a new vinyl album out on Dromedary records.

John S. Hall is back in a new trio

BY JOHN PIETARO | On splashed green vinyl spinning at 33 1/3 rpm, performance poet John S. Hall lets loose within the confines of newly christened trio, You, Me and This Fuckin’ Guy.

Not that he was exactly a slave to conformity before: Hall was heretofore known for fronting ’80s Downtown ensemble King Missile, whose renowned hit “Detachable Penis” was less than genteel.

Hall, thriving on his acerbic humor, length of social activism and considerable gift of verse, steps further into the performance-art tradition here, conjuring a working-class hero/antihero for all time.

Erupting continuously with emotive phrases that the F.C.C. has never forgiven, Hall reels the listener in just as the repulsion fades.

As an aging New Yorker, I recognize the nostalgia in this verbiage and style, recalling a time when every cabbie, newsstand owner and hash-slinger sounded very much like this, give or take the regularity of F-bombs.

In each of the dozen selections, Hall and his bandmates, Azalia Snail (“the Queen of Lo-Fi”) and multi-instrumentalist Dan West, the tales are cast, by turn bizarre or run-of-the-mill New York, all of which seem to make sense on one argumentative level or another.

The purposely lo-fi keyboards and highly compressed rhythm-machine beats, along with West’s deceptively artful electric guitar, well reflect the era of King Missile’s founding, the Downtown that was — long before gentrification priced out the arts, as well as the revolutionaries birthed in the squats and lofts.

Whispered or “girl group”-style backing vocals by Snail and West, often paired with atmospheric synthesizer and a variety of loops, only add to the mystery contained in these grooves.

Hall’s jagged philosophical musings range from hysterically funny (“Owls,” “Hike”) to politically profound (“FBI”) and insightful (“Dan West”). But he also delves into the coarsely contemplative with “Moon” and the closing cut, “Stars.” And, perhaps surprisingly, the legitimately meditative (“Sunset”).

For all of his eruptions, the poet seems to be only partially satirical in this effort. In the company of these two sensitive, supportive musicians (West has a particularly fascinating history as a jazz, rock and experimental artist), one is indeed drawn into Hall’s vision of Downtown, then and now…and some other fuckin’ time.

Pietaro is an arts journalist, creative writer and musician from Brooklyn.