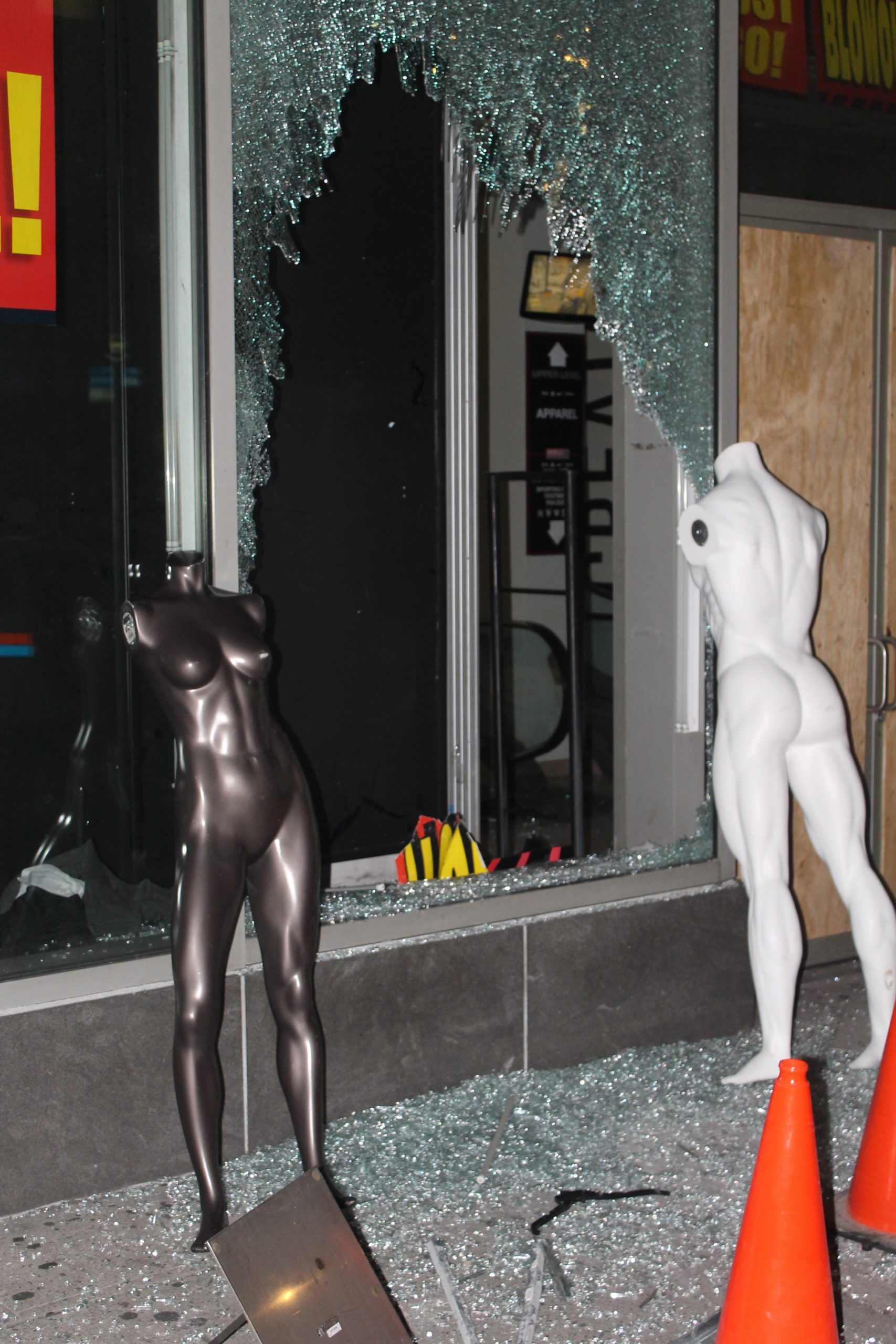 "Gotta go to Mo's...to loot!" An interesting tableau at Modell's at 18th St. and Sixth Ave., one of the stores in Chelsea that was looted. (Photo by The Village Sun)

‘It was madness’: Looting rages on as city starts curfew

Or you could also call it Plywood Way, as all along 14th St., storefronts and residential building lobby windows have been boarded up for protection.

Looting in Manhattan reached a new level of frenzy last night, with young teenagers roaming on foot and on bikes and groups of young men in cars seemingly having free rein to hit stores over and over again.

And it’s not clear when it will all end.

Observers said the looting is “highly organized,” with the individuals coordinating by phone and operating in teams, in cars or in pairs on motor scooters — one guy will stay on the scooter while the other rushes inside to grab stuff.

Many of the cars have out-of-state plates, local residents and security guards said.

The mayor and governor finally moved to put a curfew into place at 11 p.m. Monday — but some major break-ins still occurred in the hours before the rule went into effect.

The Foot Locker on 14th St. between Fifth and Sixth Aves., for example, was hit hard between 8 p.m. and 9:30 p.m. Monday, according to a local resident on 13th St. who declined to give his name. Sitting on his stoop after midnight, he said he had been out “patrolling” and observing the mayhem.

The looters had tried to get into Foot Locker the previous night, but only broke through the glass not the gate, he said.

“Today, they breached it,” he related. “Two nights ago, they looted Sunglass Hut and then Urban Outfitters. They went for sneakers, clothes and glasses.”

The looters then piled the pilfered goods into cars, which they had parked on 13th St., and fled, the man said.

“This was their getaway route,” he said of his block.

Riot helmet-wearing police had 14th St. between Fifth and Sixth Aves. cordoned off around 12:30 p.m. and refused to allow press onto it. Only an M14 bus — empty — was allowed to rumble through.

“The block’s closed,” one of the officers said.

Video games are another favorite target of the looters. The GameStop on 14th St. was hit in a big way Monday morning at 3 a.m. and then again late on Monday night.

Ben Gjoni, a residential manager at The Victoria co-op, at 7 E. 14th St., was sitting watch overnight in front of the place with Robert James, a hired security guard, early Tuesday morning around 12:30 a.m. Around midday on Monday, the 495-unit building’s large lobby windows had been covered with plywood. The street had been filled with the sound of screw guns and saws as all the other places on the block hurriedly did the same thing, he said.

They had witnessed the looting rampage at the GameStop across the street.

“There were 30 or 40 kids going in,” Gjoni said. “You had cars stopping on the other side of the street just to run inside [and take stuff]. They pulled the gate off the tracks — they had 30 people pulling on it.”

Around midnight, just before The Village Sun came by, he said looters had hit the store yet again, though this time only for 20 minutes.

Strewn about the sidewalks on 14th St. and Sixth Ave., were empty sneaker boxes, coat hangers and, of course, broken glass from shattered store windows.

In some spots, cleaned-out cash-register drawers could also be seen left on the pavement.

Some stores’ alarms were still sounding when The Village Sun came by.

In Chelsea, along Sixth Ave., young looters continued to drift through the streets into the wee hours, looking to grab more stuff from stores whose windows had been shattered earlier.

Officers stood guard outside the breached stores — either standing on the sidewalk or sitting inside cars with the police lights flashing. Despite the curfew order, however, police did not appear to be arresting — or even questioning — those still roaming the streets in the early-morning hours.

Occasionally, police would say something.

“No standing still. Keep moving,” an officer in a patrol car said over his loudspeaker.

At another point, a black female police officer got out of her car on Sixth Ave. and berated a group of young looters on the other side of the street. She sounded like a frustrated mother scolding children.

The group gave her some lip, with one of the guys saying she couldn’t tell them to go home.

In addition to GameStop and sneaker shops, eyeglass stores are a top target. A Cohen’s Fashion Optical at 15th St. and Fifth Ave. and the Sol Moscot at Sixth Ave. and 16th St. were cleaned out.

One thing the looters don’t seem to be focused on is food. They’re apparently not interested in Trader Joe’s fare — like Coconut Crispy Rolls or Jicama Wraps — because the TJ’s at 21st and Sixth Ave. had its lights blazing, but its large, inviting windows were unharmed early Tuesday morning. Similarly, the Fairway supermarket at 25th St. had its lights on and no protective plywood up and was undamaged.

But, just across the street from Fairway, two cops in helmets stood guard outside a CVS that was not boarded-up. CVS seems to be another favorite of the looters, and several other of its other Downtown outlets have been hit.

Two blocks north of there, a Duane Reade had been breached, its tripped alarm still sounding. Through the shattered window, Pringles cans could be seen strewn all over the floor, and an empty cash-register drawer was left outside, propped beside the window. A police officer in a helmet and holding a black club stood nearby as another cop sat in a car with its blue, red and white lights flashing.

“Look at that,” the cop on the sidewalk muttered as a dark-colored SUV with a group of men in it drove by up Sixth Ave. He eyeballed another car that was slowly rounding the corner — and the driver, sensing the officer look his way, suddenly hit the gas and sped off down 27th St.

The looters seen by The Village Sun were not violent, however. In fact, they seemed pretty peaceful.

None of them were chanting any protest slogans. However, one group that came along had tunes playing on a small boombox and were dancing a bit. They stopped to snap some selfies in front of the Modell’s sporting-goods store at 18th St., getting a kick out of two naked mannequins flanking its broken window. Eventually, an officer in a car deigned to shoo them along.

While not violent, the looting definitely had a feeling of anarchy — and of a city out of control. Although the mayor has blamed the problems on outside anarchists, the looters seen by this reporter just looked like opportunists.

The city has now moved Tuesday night’s curfew up to 8 p.m., which people interviewed early Tuesday morning, having heard that would happen, said was a good idea.

Also early Tuesday morning, workers were cleaning up broken glass and installing replacement plywood at a wine and liquor shop at 27th St. and Sixth Ave. The store had installed plywood earlier, but the looters, using crowbars, had broken right through it.

“They did it three times,” a worker said, “yesterday — and then twice today.”

A neighbor, who was out walking his dog and talking to the liquor store workers, said he had watched and videoed the whole thing and that the police response had been tepid.

“It went on for hours,” he said. “The cops came in force — they looked around, and went back in their cars.”

At 30th St. and Sixth Ave., cops had the street cordoned off because the Police Department’s Traffic Control Division is down the street. They weren’t worried about looters, obviously, but cop-hating anarchist protesters trying to hit the station house.

A block north of there, Umar Holland, 19, was sitting on a chair on the corner outside the boarded-up Nordstrom store.

He said the looting had reached a new high on Monday.

“It’s worse — a lot more than yesterday,” he said. “It was madness today.”

Earlier that afternoon, a group of looters had broken through the plywood on the Nordstrom store’s 31st St. side, but they couldn’t get through the glass window, he said.

He empathized with police, though, saying it’s too hard to try to catch all the looters.

“Sometimes, they’re groups of hundreds,” he said. “Once the police show up, everyone runs away in different directions. The only people they can catch are the people inside the stores.”

Holland said the looters are overwhelmingly young, and that he saw one kid who looked to be no older than 10.

He noted that looters had been repeatedly going into a small costume jewelry store kitty-corner from Nordstrom. At one point, as he spoke, a half-dozen young looters could be seen dribbling out of the place, then drifting off up the avenue, several of them on bikes.

“That’s a family-owned business,” the guard said, disapprovingly. “I don’t care if they want to rob a Gucci store or a GameStop. But the mom-and-pop store, they’ll be feeling it their whole life.

“At least it’s a good time to be in security,” he quipped.

Bill Dobbs, a longtime anti-war and gay activist living in Soho, supports the protesters. But he said this level of looting is definitely something new — and not good — for the city.

“They really were not enforcing the curfew last night,” he noted, speaking on Tuesday afternoon. “The Apple Store is on its second layer of plywood. Chanel was hit three times. When you get stores like Macy’s being looted…those are like symbols. That’s kind of different.”

One of the few people outside late Monday night and early Tuesday morning during the curfew was Bill DiPaola. He’s the founder of the local group Time’s Up, which supports pollution-free transportation and runs the monthly Critical Mass bike rides, and also the co-founder of the East Village’s Museum of Reclaimed Open Space (MoRUS), which focuses on issues like squatting and community gardens.

DiPaolo was biking around doing interviews, getting people’s thoughts on the curfew. He was concerned about the potential for “selective enforcement” of the rule, and had been discussing that earlier with civil-rights attorney Norman Siegel.

“I’ve been putting my whole life into the right to keep free speech and the right to assemble,” DiPaolo said. “Today is the first day of a curfew — actually, it’s a double curfew because we’re not supposed to be out. Tonight it’s 11 o’clock, tomorrow it’s 8 o’clock, then 6 o’clock — where does it end?”