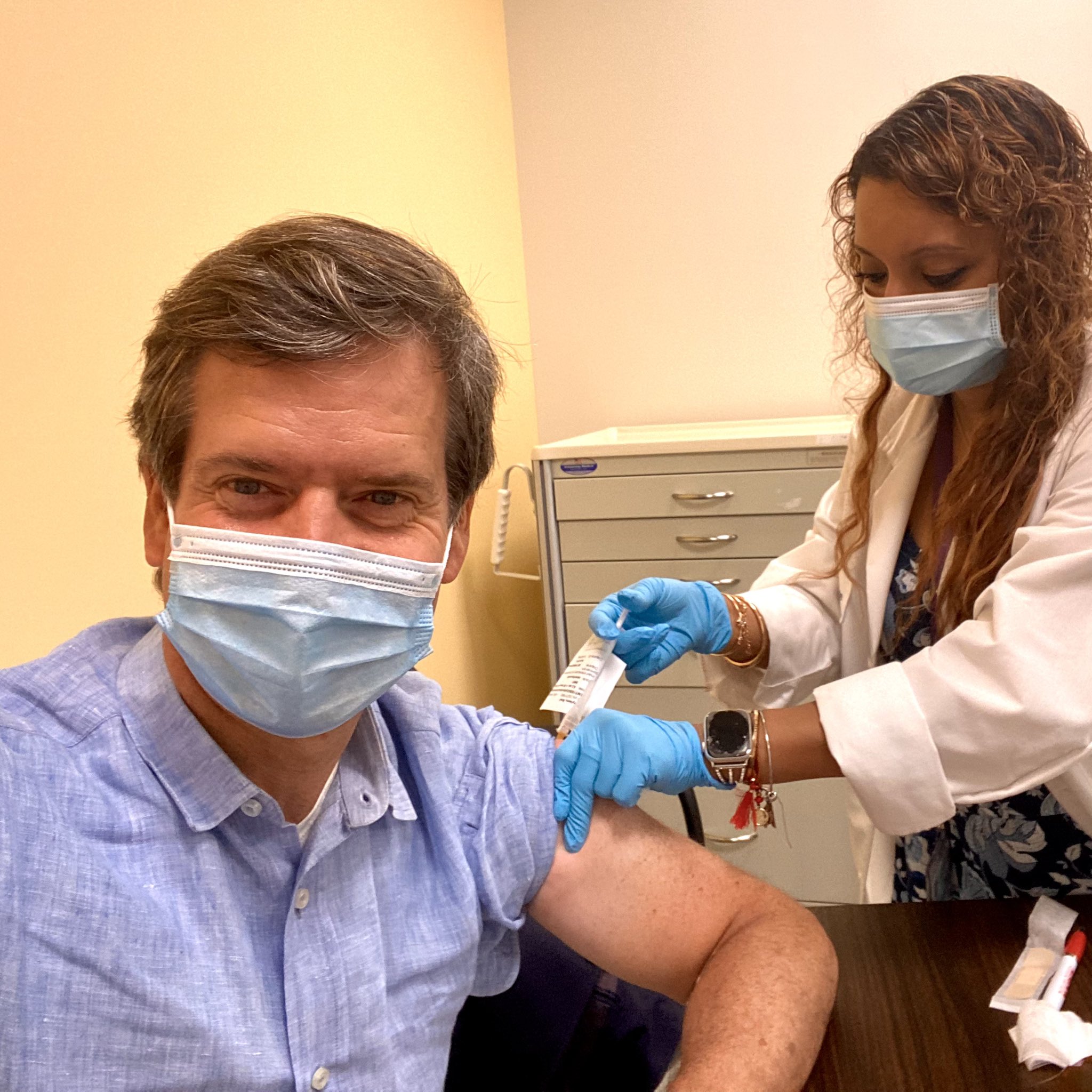 BY LINCOLN ANDERSON | Refuse to get the jab? The taxman could stick it to you in your wallet.

That’s an idea currently being kicked around on social media by state Senator Brad Hoylman.

“I’m putting it on social media just to gauge the reaction,” Hoylman told The Village Sun.

Hoylman has written up language for a bill and actually posted it on Twitter. But the bill has not introduced in the state Senate.

Basically, Hoylman said that, given the amount of public dollars “going down the drain” to combat COVID due to people refusing to get vaccinated, plus the long-range concerns about the virus’s trajectory, a tax could well be the right thing to do.

While the vaccination rate is high in New York City, it’s low in Western New York and Upstate, where the number of cases is rising, he noted, adding that’s why a “carrot and stick” approach may be needed. He said the dichotomy on the issue between city residents and those in the rest of the state is “not surprising.”

Basically, this theoretical tax would impose a levy of 1% per unvaccinated adult in the household for incomes greater than $50K single, $75K heads of household & $100K for joint filers.

A medical exemption would apply. pic.twitter.com/jyE9LiZ5kG

He said he also objects to the idea of “forking over tax dollars just to get people to do the right thing,” such as New York City has done by giving people $100, free tickets and memberships just to get the free shots and overcome their vaccine resistance and hesitancy.

“Where’s the [personal] responsibility?” he asked in frustration.

Hoylman said those who refuse the vaccine are putting others — like the immunocompromised, the elderly and ineligible individuals, like young kids — at risk.

“My daughter is four,” said the pol, who lives in Greenwich Village. “They’re putting my daughter and other New Yorkers at risk because of their selfishness.”

Young children are admittedly less susceptible to the virus, though Hoylman noted, “but that’s for now. What about a variant that affects young children?”

Hoylman is proudly pro-vaccine. In fact, it was his legislation that authorized New York pharmacies to administer COVID shots. He also sponsored the legislation that ended religious / nonmedical exemptions for vaccines for schoolchildren. In response, he faced a challenge from a vaccine foe in his most recent state Senate election.

“I’ve been a champion of vaccine science in public policy throughout my career,” he proudly said.

He said a big concern, especially now with the cold weather coming on, is that the unvaccinated will become incubators for new variants of COVID, some of which could potentially even be vaccine-resistant.

“What really is the nightmare scenario is a deadly new variant somehow getting a foothold among the unvaccinated…that might put at risk the elderly and those with preexisting conditions,” he warned. “We have no idea how this virus will turn. What we don’t know [about COVID] seems to be the operating principle.”

As for the psychology of those individuals — like Packers quarterback Aaron Rogers or some Big Apple firefighters — who stubbornly refuse the jab, Hoylman scoffed, “It’s really rooted in selfishness. I think it’s classic selfishness and, frankly, ignorance.”

To those who argue that “natural immunity” is better than a double dose of Moderna or Pfizer, the state senator countered, “Natural immunity could be a death sentence to many New Yorkers, particularly the elderly and very young.”

The politician said he understands the lack of trust in some communities due to unethical drug trials that occurred in the past. One of the most notorious was the Tuskegee study of Black men with untreated syphilis.

“But there’s a large percentage that are just sticking their heads in the sand and making us do the job for them,” he said of others who snub the vaccine.

Again, Hoylman explained of his anti-vax tax idea, “This is a theoretical proposal. I was trying to spark a conversation about how we can do better.”

Meanwhile, the health crisis, on the other hand, continues to be very real.

“With Thanksgiving coming, could there be a holiday variant that emerges?” he asked. “We just don’t know.

At the same time, he added that using social media to test public reaction to his proposal does have its drawbacks.

“In one way, social media is not the best way to gauge this because you have a lot of wingnuts in the anti-vax community [on social media],” he said. And yet, at the same time, he said, “Social media also can smoke out the wingnuts.”

Speaking of which, Hoylman considers Robert F. Kennedy, Jr., to be one, and a dangerous one, at that.

“Look, Robert F. Kennedy Jr. is still on Twitter — and why?” he asked, noting he sent a letter to Twitter C.E.O. Jack Dorsey demanding the prominent anti-vaxxer be blocked.

“He continues to tweet misinformation about COVID vaccines and all vaccines,” Hoylman fumed of RFK Jr. “He is a dangerous individual who has stoked [fears] and is confusing the public. If Donald Trump is removed from Twitter, frankly, Robert F. Kennedy should be. I don’t know how he lives with himself. Children’s Health Defense should be shut down.”

“We tax a lot of sin products,” Hoylman added, “cigarettes, alcohol, gambling. Some states tax sugary sodas. We should look at taxes and fees that protect the public. That’s one of the tools in our toolkit.”

Hoylman said he had his counsel draft language for an anti-vax tax bill “to make it less theoretical. I would call it a conversation piece right now,” he reiterated. “We’ve been kicking it around for a while. Rather than introducing a bill, we thought this would spark a conversation.”

As for coming right out and calling it an “anti-vax tax,” Hoylman said there’s no point in beating around the bush. Vaccine opponents prefer more innocuous-sounding descriptions of themselves, like “pro-health choice.”

He noted that, for his views, the vaccine foes have threatened and tried to bully him and have bombarded him with “wild conspiracy theories.”

“These people are not wedded to reality,” he said. “Some of them are the same people who still believe President Trump will be reinstated by the end of the year. You can’t make it up. They believe that John F. Kennedy Jr. is going to reappear. Unfortunately, this is our reality in public discussion.

“I think New Yorkers are fed up,” he said. “It’s past time for [unvaccinated] New Yorkers to walk into the pharmacy and get that jab.

“Look, I’m not a doctor,” Hoylman said. “But, that said, I know an ounce of prevention is worth a pound of cure.”