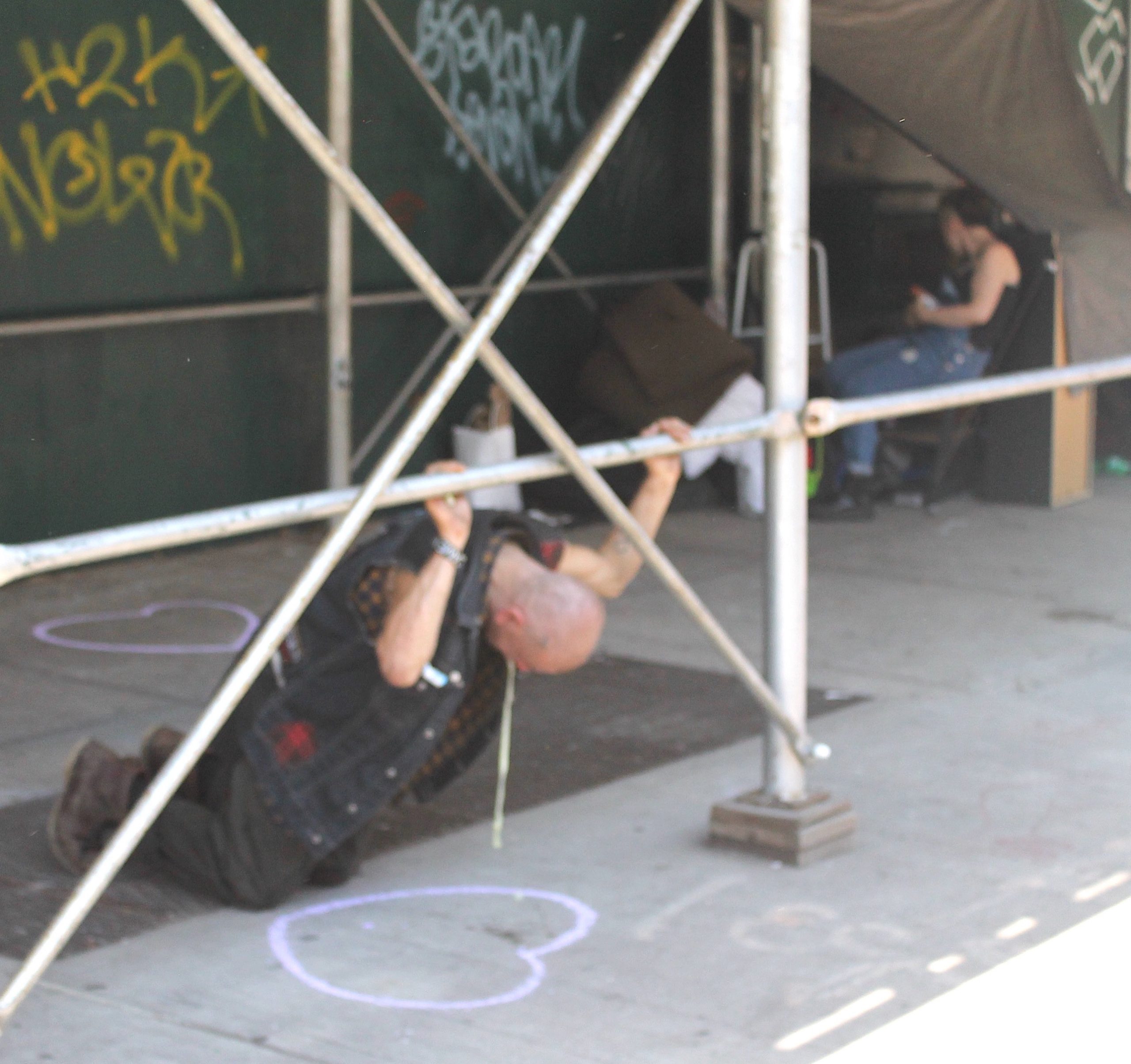 You gotta have heart. A crusty traveler heaves into a heart on Second Ave. (Photo by The Village Sun)

Homing in on homeless encampments

One of his constant scourges, The New York Post has recently been hounding him over homeless camps, from a new one under the F.D.R. Drive near South St. Seaport to entrenched ones, like the seasonal crusty encampment on Second Ave. at E. Seventh St.

The Second Ave. one has been around, off and on, for several years now, ever since a horrific gas explosion in March 2015 leveled three buildings, leaving the corner vacant behind a chain-link fence. Crusty travelers camp out there in the warm weather, but have frequently drawn the ire of local residents.

Police have intermittently cracked down on the young travelers in the past, using light towers, for example, to illuminate the spot at night.

While a new building going up on two of the Second Ave. lots has topped-out, it’s still under construction and is ringed by a sidewalk shed, which is often a magnet for the homeless.

On Monday afternoon, three crusties were puttering around under the shed at their encampment. They had hung up a tarp and cobbled together some thrown-out furniture to form a sort of lean-to.

When one of them noticed The Village Sun snapping photos of them, he gave the double finger, then shambled over to the scaffolding, and while clutching onto it, wretched. A thin viscous stream of yellow puke flowed from his mouth down to the pavement.

But at least his aim was intact: His vomit landed perfectly inside a purple heart on the sidewalk. Then again, who knows if he was even aiming?

The man next clamped headphones over his skull and listened to something on the city’s free WiFi kiosk conveniently right next to their lean-to.

A tall older area resident was passing by with a small plastic bag from an errand. Asked if the crusty encampment bothered him at all, he simply said no, then continued on his way.

Another long-running East Village homeless spot is outside the old P.S. 64, at 605 E. Ninth St. The building, which most recently was the CHARAS/El Bohio Cultural and Community Center, has sat vacant for more than two decades as developer Gregg Singer has battled the community in vain to create an alleged university dormitory there.

As on Second Ave., a sidewalk shed here gives the homeless some shade and shelter from the elements.

The old school building’s 10th St. side is also a spot where the homeless hang out.