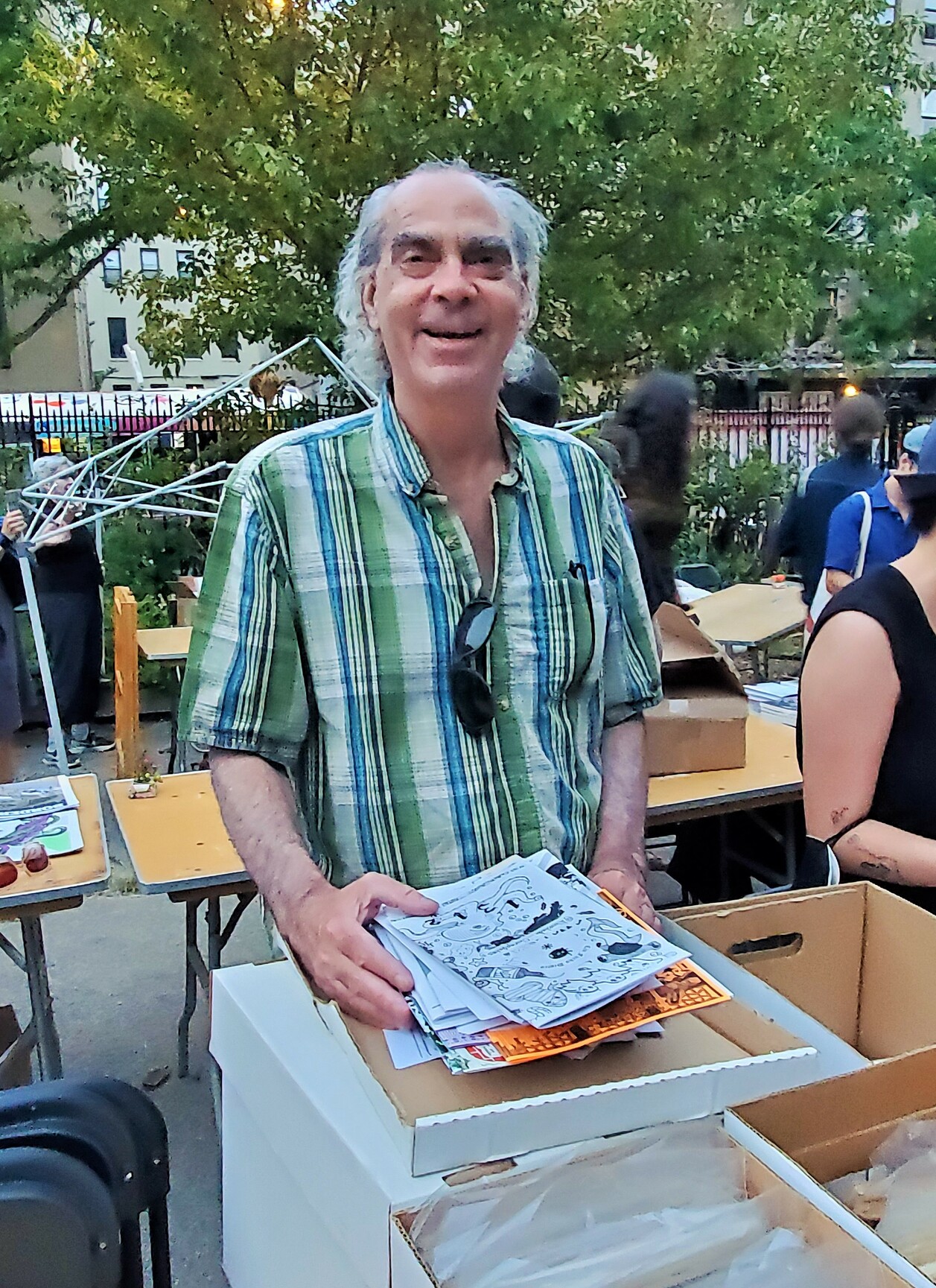 Steve Englander said the ABC No Rio project is still on track. (Photo by The Village Sun)

BY THE VILLAGE SUN | ABC No Rio is getting there, and still on track for a spring groundbreaking for its new building — but probably will need more funding for the project.

Steve Englander, the director of the collectively run Lower East Side arts and activism center, said the group’s focus right now is on “determining the cost” to rebuild anew at 156 Rivington St.

Englander was manning a table at the Anarchist Book Fair in La Plaza Cultural Garden, at Ninth Street and Avenue C, on Saturday. In boxes in front of him were “dupes” — extra copies — of Maximum Rock N Roll and vintage anarchist newspapers from the ’90s from ABC No Rio’s zine library.

“We expect that we won’t have enough money,” he said of the building’s construction budget. “To determine the cost, we’re putting it out to bid in early December. After that, we’ll know if we have have enough funds to do it.”

Basically, the bids submitted by interested construction firms will show their estimates of the project’s cost to build.

As of now, ABC No Rio has more than $11.5 million in hand. Councilmember Christopher Marte recently kicked in $1.5 million to the pot the nonprofit already had, $10.12 million — a mix of city funding and privately raised money — to erect the new building.

However, a construction manager who has been overseeing the project “thinks more is needed,” Englander said of the frustrating financials. Meanwhile, the more the work’s start is delayed, the more the cost only goes up.

Back in 2016, when ABC No Rio decided to demolish its dilapidated former squatter building and replace it with a new, state-of-the-art, energy-efficient structure, the construction estimate was $8 million. So it looks like, in the end, the cost will have nearly doubled.

As a result, the next anticipated stage, once again, will be a focus on funding.

“It’s just a matter of getting the money now,” Englander said.

As The Village Sun previously reported, the ABC No Rio project’s design was tweaked last year to reduce costs, by narrowing the building a bit and eliminating unneeded interior spaces to pare down the project.

Once the work finally gets going — hopefully by this coming March or April — it’s expected to take 18 months to complete.

“So, two years from today at best,” Englander said of when the project’s first phase would be done — assuming the construction-cost bids submitted are not astronomical.

The plan for phase one is to build out the entire shell of the four-story building. However, initially, only the ground floor and basement would be open and fitted out for use. That way ABC No Rio could start holding concerts, meetings and forums again. The other floors, for example, would have plumbing installed — but not the sinks, which would come at a later point.

The second floor would include the office and meeting space. The third floor would have a darkroom and silk-screen-printing shop — all of which would be installed in phase two. The fourth floor is eventually slated to have a “digital resources” center (computers) and the zine library.

“The most important part of the first phase is to resume public programing,” Englander stressed.

In the meantime, the nonprofit has been holding “ABC No Rio in Exile” events at local venues like P.S. 122, MoRUS and The Clemente. But, the director said, “It’s not the same thing.”