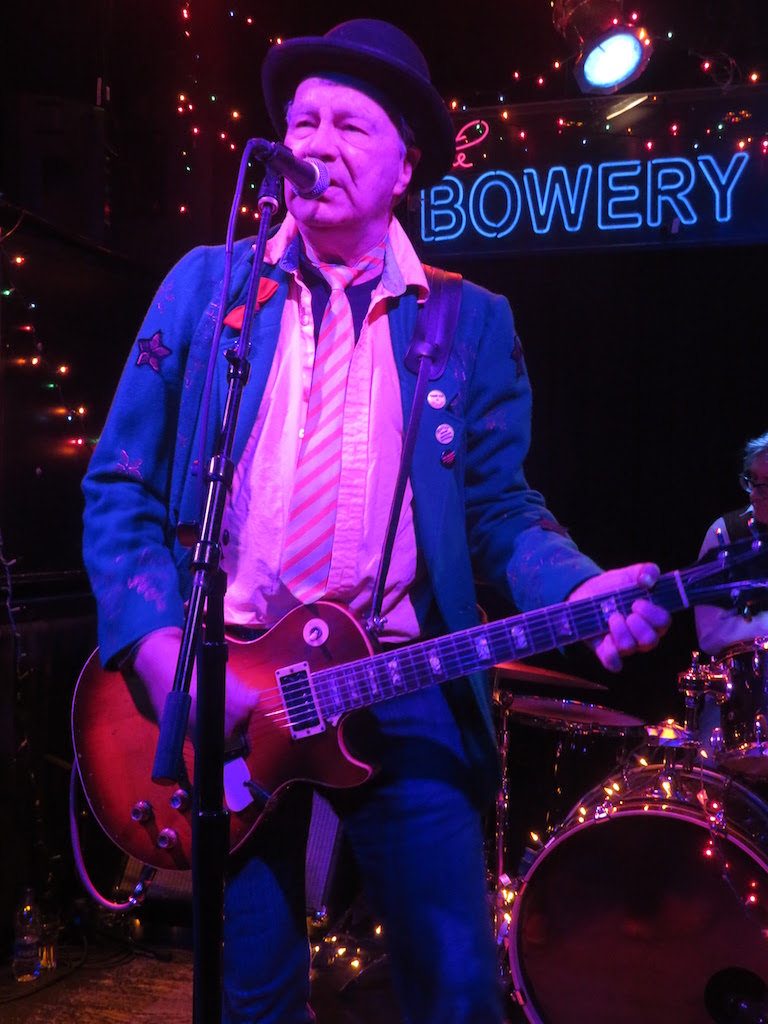 Walter Lure playing with his band The Waldos at Bowery Electric. (Photo by Everynight Charley Crespo)

Walter Lure, a founding member of the pioneering 1970s punk rockers the Heartbreakers, died on Aug. 22 at age 71. He played on the group’s only album, “L.A.M.F.,” with Johnny Thunders in 1977. Lure went on to a career in finance but always continued playing music, including with his band The Waldos. Here, Everynight Charley Crespo shares memories of his friend Walter Lure.

BY EVERYNIGHT CHARLEY CRESPO | Walter Lure and I became friends on Sept. 28, 1972. David Bowie and the Spiders from Mars had just played their first New York concert ever and, as I came out of Carnegie Hall, I saw this guy standing on the curb who looked and dressed like Keith Richards, right down to the shaggy haircut and snake tooth earring.

I had just come off my first Rolling Stones tour two months earlier, so I just had to start a conversation with this guy. Walter and I spoke about Bowie’s awesome concert and continued chatting until we realized that we had seen each other at Fillmore East concerts several times in 1970 and 1971.

We exchanged telephone numbers and began hanging together at concerts or at his Brooklyn Heights basement apartment. Starting with his first real band, the Demons, he always put my name on the guest list for his shows whenever I asked. And, once I started getting on press lists in 1974, sometimes I would get him into shows and parties, as well. I saw Walter perform in more Heartbreakers and Waldos concerts than I could ever count.

At a Waldos concert at the Bowery Electric last year, Walter noticed me moving to the front for the encore and introduced the song as “Too Much Charley Business.” Afterward, I thanked him for his faithfulness in adding my name on his guest list for more than 45 years, especially for the nights when I was the only person on his guest list. He responded, “Charley, you are my oldest and dearest friend.” I doubted this statement was true, but he meant it when he said it, and we hugged.

A little more than a month ago, Walter confided in me that he had been in the hospital “for a few weeks” with lung cancer. I was devastated. We made tentative plans to do things together in September, after his convalescence. I do not know if either of us actually believed he would leave the hospital.

His telephone was off and his voicemail was full, so I later sent him an e-mail asking if I could tell people of his illness. He never responded, so for more than a month I had to keep this very painful secret to myself.

This past Saturday I sent him another e-mail with get-well wishes. I did not get a response. The next day, Aug. 22, the demon cancer took one of my oldest and dearest rock and roll friends.

A lifelong resident of the Lower East Side, Everynight Charley Crespo lives for live music every night. He blogs at themanhattanbeat.blogspot.com.