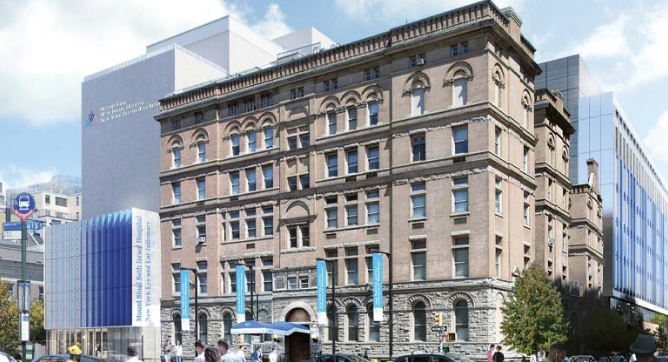 A schematic rendering showing the design plan for the new Mount Sinai Beth Israel at Second Ave. between E. 13th and E. 14th Sts. The existing New York Eye and Ear Infirmary of Mount Sinai is shown in the foreground.

On Jan. 23, the P.H.H.P.C. Establishment and Project Review Committee had voted to approve Mount Sinai Health System’s application for a certificate of need that would enable Mount Sinai to build a 70-bed facility to replace the existing 650-bed Beth Israel Hospital building at First Ave. and E. 16th St. However, that approval included three conditions.

The first condition requires Mount Sinai to submit a plan that would help patients navigate the evolving Mount Sinai Health System. This plan must be acceptable to the state Department of Health, and it must be provided to the department within 90 days of P.H.H.P.C.’s approval letter.

Second, no later than 90 days before the new 70-bed facility opens, Mount Sinai must provide the Department of Health with a comprehensive transition plan, including a communications plan, that is acceptable to D.O.H.

Third, within 18 months of P.H.H.P.C.’s approval letter, Mount Sinai must submit documentation of its exploration of the possibility of opening a birthing center at the new mini-hospital, which is slated for Second Ave. between E. 14th and E. 13th Sts. The documentation must include a business feasibility study, potential site locations, review of quality and safety concerns, and consideration of birthing center governance models.

Two members of the P.H.H.P.C. opposed the application. One of them, Dr. Howard Berliner, who is a professor at SUNY Downstate Medical Center and chairs that hospital’s Health Policy and Management Council, had three serious issues with Mount Sinai’s application.

First, Berliner pointed out that a large number of acute-care beds have already been removed from Lower Manhattan, which has a growing population and experiences the largest daily surge in population of anyplace in the United States. He did not think that removing another 500 beds and replacing them with a smaller 70-bed facility “is adequate in a part of New York City which is growing in population.”

P.H.H.P.C. Chairperson Jeffrey Kraut, who is the executive vice president for strategy and analytics at Northwell Health, asked him, “So you would rather have the St. Vincent’s outcome?”

He was referring to the closure of St. Vincent’s Hospital in 2010, after which the Greenwich Village hospital campus was replaced with a high-end residential development.

Berliner replied that developing luxury housing at the current Beth Israel Hospital site was not the only option. Mount Sinai could, for example, be required to build a 150-bed acute-care replacement facility, he pointed out.

“The E.R. is overcrowded today,” he said, “and the increase in [its] size is not enough to make up for the lack of acute-care beds in that area.”

Berliner added that it is great to have primary-care clinics and other medical-practice plans — as he noted of the expanded Downtown Mount Sinai network. But, he noted, “Those don’t operate 24 hours a day, seven days a week.”

He added that he finds Mount Sinai’s E.R. plans for Lower Manhattan to be “just scary.”

Finally, Berliner said he did not believe that adding an outpatient birthing center was a sufficient answer to the problem of access to maternity care that was created in Lower Manhattan when Mount Sinai closed Beth Israel’s highly successful maternity unit.

Chairperson Kraut instructed the P.H.H.P.C. members that their determination was based on three criteria: whether a project is needed, whether it is financially feasible, and whether the applicant has the “character and competence” to carry it out.

Guaranteeing the healthcare of New Yorkers is not, unfortunately, among of the concerns that P.H.H.P.C. is charged with applying.

Tracy Raleigh, the P.H.H.P.C. member who represents the state Department of Health, promised that, in view of public concern over the application, the department would report back to the full P.H.H.P.C. regarding Mount Sinai’s compliance with the conditions put on the council’s approval.

After the application passed with two P.H.H.P.C. members voting to oppose, nearly half of the people in the audience got up and left. That was an indication of the continuing level of public concern.